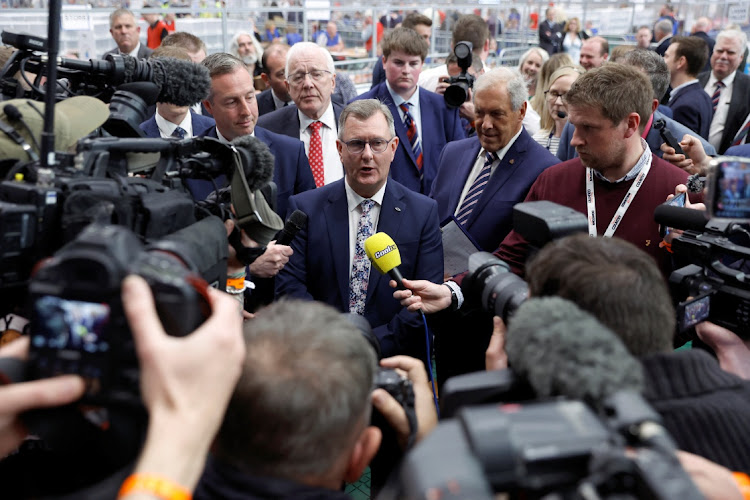 Sinn Fein, the former political wing of the Irish Republican Army (IRA), overtook the DUP to win the most seats at elections to the region’s devolved assembly at the weekend, the first time a party seeking to leave the UK came out on top.

Under the terms of a 1998 peace deal that mostly ended three decades of sectarian conflict in the British-controlled province, the main nationalist and unionist rivals are obliged to share power.

The DUP had pledged not to participate until Britain and the EU agree to lift trade barriers between the province and the rest of the UK imposed by the post-Brexit Northern Ireland protocol.

“We have made clear this morning that until he honours his commitment, we will not be nominating ministers to the executive,” DUP leader Jeffrey Donaldson said.

The election reaffirmed that a majority of MPs, including Sinn Fein, favour retaining the protocol, which was designed following Brexit to avoid fraying the EU single market via the open border with Ireland.

While the DUP wants all trade barriers removed, Sinn Fein and others would settle for some easing of the rules.

“Any tactics of delay from the DUP, any gamesmanship from the British government who may wish to use Northern Ireland as a bargain chip would be clearly intolerable and must not happen,” Sinn Fein president Mary Lou McDonald told a news conference.

London has long threatened to unilaterally overrule parts of the protocol and Lewis said on Monday that it “would not shy away from taking further steps if necessary” if agreement with the EU could not be reached.

The nationalist party will be the largest party in the Northern Ireland Assembly for the first time, followed by the DUP.

The EU’s envoy to Britain said the bloc was ready to restart talks on the protocol after a pause for the elections but would not overhaul the arrangement that is central to post-Brexit trading rules.

“Let’s be clear: we are not ready to renegotiate an international treaty that we signed just a couple of years ago,” Joao Vale de Almeida told BBC radio on Monday.

“But also it is clear in our mind that unilateral action creates more problems than the ones it solves. So we need to find jointly agreed solutions.”

Vale de Almeida said the EU was ready to talk with the Unionist politicians about their fears over the protocol.

Irish Prime Minister Micheal Martin said any further setbacks in the talks would prove that Brexit was not yet settled, but there was a “landing zone” to smooth trade. “The EU will need an indication that people are in the mood for settling this and resolving this, that it can't be one more concession after another,” Martin told RTE radio.