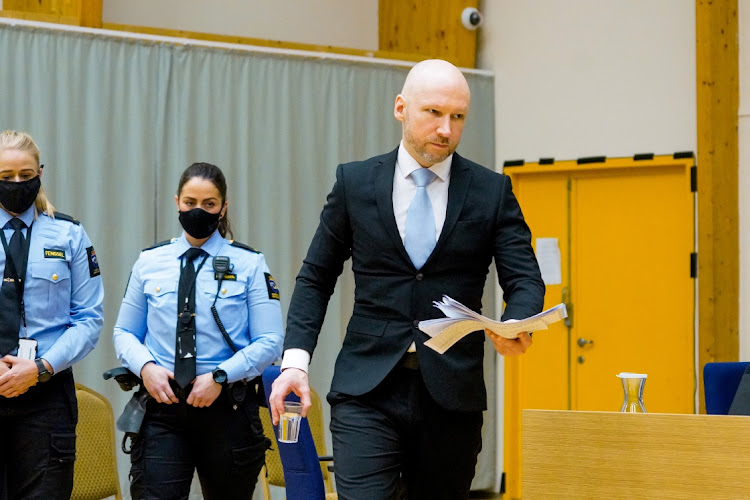 Mass killer Anders Behring Breivik arrives at the makeshift courtroom in Skien prison on the second day of his trial, where he is requesting release on parole, in Skien, Norway on January 19 2022. Picture: NTB via REUTERS/OLE BERG-RUSTEN

Oslo — Norwegian mass murderer Anders Behring Breivik, who in 2011 killed 77 people and maimed dozens more, hasn’t reformed during his time in prison and should be kept behind bars, a state prosecutor told his parole hearing on Thursday.

“He has demonstrated no empathy or genuine regret,” Hulda Karlsdottir said in closing remarks at the end of three days in court. “He continues to glorify his role.”

Breivik, an anti-Muslim neo-Nazi, killed eight people with a car bomb in Oslo and then gunned down 69 more, most of them teenagers, in Norway’s worst peacetime atrocity.

Having earlier described the murders to the court, the prosecution on Thursday provided a detailed account of the cases of 33 survivors who were shot, many of whom were hit multiple times and permanently injured.

Breivik’s assurances that he will no longer commit violence are simply not credible, Karlsdottir said.

“This is a PR stunt,” she said, noting that at the start of the hearing on Tuesday Breivik gave a straight-arm Nazi salute as he entered the courtroom.

Breivik, 42, is serving Norway’s maximum sentence of 21 years, which can be extended indefinitely if he is deemed a continued threat to society. He is entitled to apply for parole, and said he hopes to be released eventually.

“I’m convinced I will be, and that I won’t die in prison,” he said after the court was adjourned on Wednesday. “I think I'll be released some time between 2032 and 2070.”

A prison service psychiatrist testified on Wednesday that Breivik's capacity for violent acts was undiminished.

Also on Wednesday, a prison official told the court that Breivik had gone on a hunger strike in 2018 and smeared a swastika made from excrement on the wall of his cell.

But like all other prisoners in Norway, Breivik has the legal right to seek release, and the correctional service is obliged under the law to see this as an eventual goal, his lawyer Oeystein Storrvik said.

“There is a duty to point towards life in freedom,” he said.

In his testimony on Tuesday, Breivik blamed online radicalisation by far-right extremists for his crimes, saying he had been “brainwashed” into carrying out the attacks.

WHO emergencies director Mike Ryan says universal vaccination is the ‘central strategic pillar’ against Covid-19 but poorer states are being left ...
World
3 months ago
Next Article