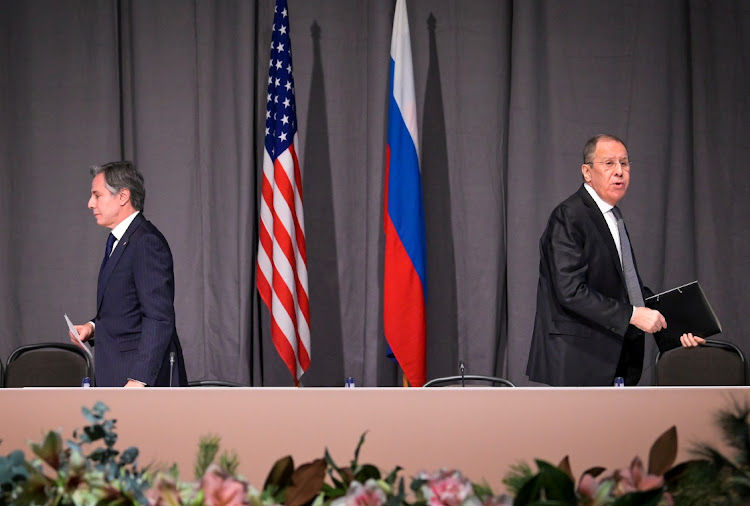 Stockholm  —  US secretary of state Antony Blinken warned Moscow of the “severe costs” Russia would pay if it invaded Ukraine, urging his Russian counterpart on Thursday to seek a diplomatic exit from the crisis.

Blinken delivered the warning to Russian foreign minister Sergei Lavrov at what he called a “candid” meeting in Stockholm and said it was likely that US Presidents Joe Biden and his Russian counterpart, Vladimir Putin, would speak soon.

“I made very clear our deep concerns and our resolve to hold Russia responsible for its actions, including our commitment to work with European allies to impose severe costs and consequences on Russia if it takes further aggressive action against Ukraine,” Blinken told a news conference after the meeting.

“It's now on Russia to de-escalate the current tensions by reversing the recent troop build-up, returning forces to normal peacetime positions and refraining from further intimidation and attempts to destabilise Ukraine.”

Lavrov, speaking to reporters before his talks with Blinken, said Moscow was ready for dialogue with Kiev. “We, as President Putin has stated, do not want any conflicts,” he said.

Ukraine says Russia has amassed more than 90,000 troops near their long shared border, while Moscow accuses Kiev of pursuing its own military build-up. It has dismissed as inflammatory suggestions it is preparing for an attack on its southern neighbour and has defended its right to deploy troops on its own territory as it sees fit.

Russia and Ukraine have centuries of shared history and formed the two biggest republics of the Soviet Union until its 1991 collapse, so Moscow views its neighbour's ambition to join Nato as an affront and a threat.

Since the latest crisis started, Moscow has set out demands for legally binding security guarantees from the West that Nato will not admit Ukraine as a member or deploy missile systems there to target Russia.

“We're going to make sure we are heard but the main thing is our security,” Lavrov told a news conference later.

“So if Nato still refuses to discuss this theme or the guarantees or ideas put forward by the president of Russia Vladimir Putin, of course we will take measures to ensure that our security, our sovereignty and our territorial integrity does not depend on anyone else.”

He struck a more conciliatory note, however, by proposing that Russia and the US bring an end to a long dispute over the size of their embassies and start afresh on the issue.

The Kremlin has been talking up the possibility of a second summit between Putin and Biden for weeks. Their last one took place in Geneva in June, less than two months after Russia scaled back a previous build-up of more than 100,000 troops on the Ukrainian border.

Blinken said: “I think it’s likely the presidents will speak directly in the near future”.

The American declined to spell out what economic sanctions Russia might face if it invaded its neighbour, saying only that “Moscow knows very well the universe of what's possible”.

Russia has withstood multiple rounds of international sanctions since it seized Crimea from Ukraine in 2014. But Western governments have a potential new lever now, as Moscow is awaiting German regulatory approval to start pumping gas through a newly built $11bn pipeline under the Baltic Sea.

Blinken said Moscow and Kyiv should each fulfil their obligations under the Minsk peace process, which was designed to end a war between pro-Russian separatists and Ukrainian government forces in the east of the former Soviet republic.

Washington was willing to facilitate this, Blinken said, but “if Russia decides to pursue confrontation, there will be serious consequences”.

The Kremlin said on Thursday — before the Lavrov-Blinken meeting — that the probability of a new conflict in eastern Ukraine remained high and that Moscow was concerned by “aggressive” rhetoric from Kiev and an increase in what it called provocative actions along the line of contact between government forces and the pro-Russian separatists.

Kiev has denied any intention of trying to take back the rebel regions by force, accusing Russia of spouting “propaganda nonsense” to provide cover for its own aggressive intentions.

Russia said separately it had arrested three suspected Ukrainian intelligence agents, including one accused of planning to carry out an attack using two homemade bombs, allegations that Kiev dismissed as trumped up.

East-West relations have sunk to their lowest level since the end of the Cold War and the demise of the USSR. The point was accidentally underlined by US defense secretary Lloyd Austin when he said during a visit to South Korea: “The best case... is that we won't see an incursion by the Soviet Union into the Ukraine.”

As the US and Britain issue warnings, Moscow defends its right to deploy troops on its territory as it wishes
World
6 months ago

Ukraine says Russia may be planning to invade, while Moscow claims its exercises are in response to Nato activit
World
7 months ago