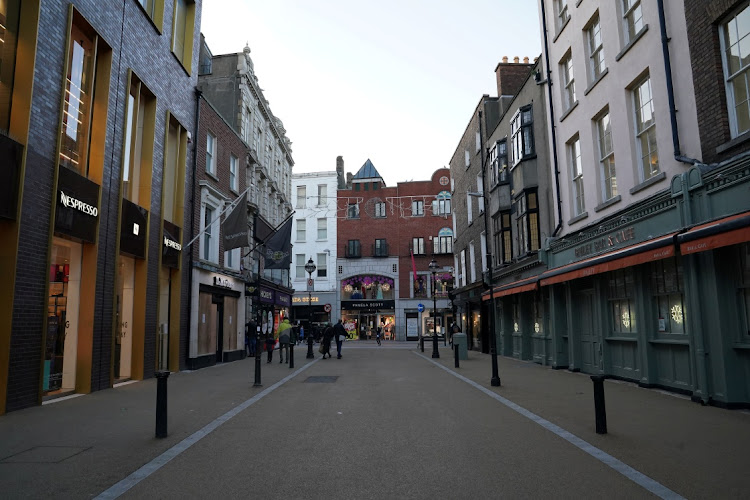 An empty shopping street is seen amid the Covid-19 outbreak in Dublin, Ireland. Picture: REUTERS/CLODAGH KILCOYNE

Dublin — Five Catholic bishops from Ireland’s 22 dioceses are set to defy Covid-19 restrictions after instructing local parishes to hold communion and confirmation services in August, drawing a sharp rebuke from the government, which has pleaded with them to wait until they consider further easing curbs later in the month.

Ireland has been gradually unwinding its third and longest lockdown and will only consider easing measures beyond a recent reopening of indoor dining at the end of August over concern about the more infectious Covid-19 Delta variant.

Regular religious services resumed for the first time in May 2021. However, baptisms will only return, under one of Europe’s toughest lockdown regimes, from this week, with ministers wary about advising that communions and confirmations may proceed due to the large social gatherings that usually follow these Catholic ritual events, known as sacraments.

While mass attendance has fallen dramatically in the once deeply Catholic Ireland, the church still owns about 90% of the country’s primary schools and the two sacraments are major family occasions for many.

“I don’t see any reason why the celebration of confirmation or holy communion should cause any concern on public health grounds because we have mass in all our churches, carefully regulated for 50 people,” the bishop of Elphin, Kevin Doran, the first to make the move on Friday, told national broadcaster RTE.

Doran said the ceremonies, which were postponed in March, would be “slimmed down” as they were in 2020, with families told not to hang around in the church for photographs afterwards and urged to limit the numbers for any subsequent gatherings.

Prime Minister Micheál Martin has said he does not approve of any unilateral breaching of regulations, while health minister Stephen Donnelly has said any such breach could put people’s lives at risk.

The reformist Association of Catholic Priests in Ireland criticised the bishops, saying the move would inevitably contribute to the spread of disease and inadvertently boost antivaccine groups by being seen to defy the authorities.

“I’m quite amazed, I think it’s an extraordinary thing for the bishops to be doing considering it’s only a matter of five or six weeks before they will be given the go-ahead anyway,” the group’s co-founder, Father Tony Flannery, told RTE on Tuesday.

The problem with the post-Brexit relationship is that squabbles are spilling out of the technocratic structure the EU’s negotiating team used to come ...
World
1 month ago

Scientists warn that countries will need to realise that extreme events are here to stay, even if the world can rapidly reduce emissions
World
1 month ago

While mandatory shots aren’t yet widespread in Europe, vaccine certificates are being widely used to determine who businesses should let dine and ...
World
1 month ago
Next Article