While mandatory shots aren’t yet widespread in Europe, vaccine certificates are being widely used to determine who businesses should let dine and drink indoors 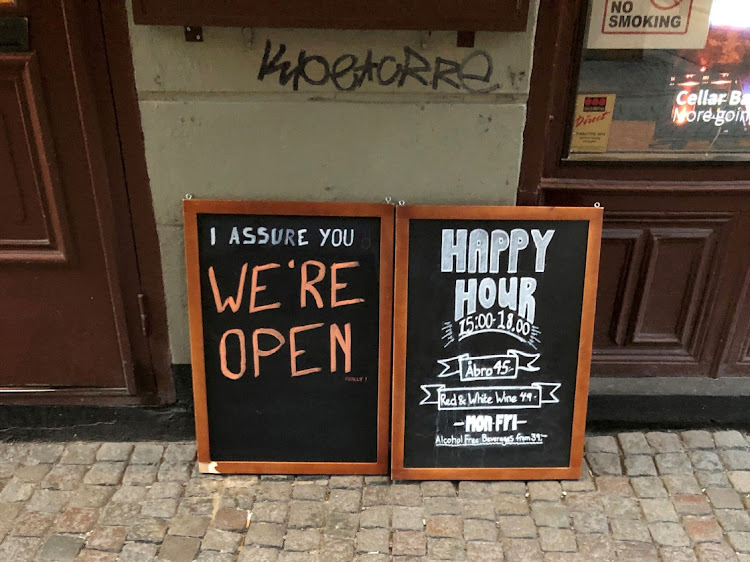 A sign assures people that the bar is open during the coronavirus outbreak, outside a pub in Stockholm, Sweden. Picture: REUTERS/COLM FULTON

Covid-19 vaccination rates are rising across Europe, restaurants and bars are reopening, people are travelling for work and leisure, and life is returning to something resembling normal.

But the virus hasn't gone away, and the recent increase in daily cases, along with the Delta mutation, is keeping health officials and governments on edge, pushing many of them to take extreme steps in the fight against the pandemic.

Over the weekend, a number of senior politicians in Germany floated the idea of imposing restrictions on unvaccinated people and even mandatory shots, despite previous comments from Chancellor Angela Merkel that the country wouldn’t go down that route.

Such a move would set Germany on the same path as France, where the government is making vaccines compulsory for health workers and requiring proof of vaccination for certain indoor events. President Emmanuel Macron’s proposals have proved controversial, with thousands protesting at the weekend, but they’ve also sparked a massive jump in vaccine take-up. Record numbers signed up for appointments for shots in the days after Macron announced the measures earlier this month. Politicians who favour a similar step in Germany may use that as reason to push their case harder.

While mandatory shots aren’t yet widespread across Europe, vaccine certificates — so-called “green passes” — are now being widely used to determine who businesses should let dine and drink indoors. In most cases, it means those who are fully vaccinated or recently recovered from Covid-19 can get in the door.

The idea of restricting access based on a vaccination criteria has angered some, particularly those already pushing to end other measures, such as mask wearing. Some critics say mandatory health passes risk creating a two-tier society, with some groups excluded from certain activities. There are also legal and privacy issues, while businesses say it’s an additional burden and cost on them.

But for those in favour , such as Macron, it’s a question of social responsibility.

“What is your freedom worth if you say you don't want to get vaccinated, but if tomorrow you infect your father, your mother or me?,” the French president said at the weekend. “That is not freedom, that is irresponsibility and selfishness.”

Below is a round up of some of the measures across the UKand the EU, with dates (where confirmed) when the measures come into effect.

Covid passes will be required to enter nightclubs and other large crowded venues, such as concerts. The new requirement, which means a negative test will no longer be acceptable, will come into effect at the end of September to give time for all those 18 years and older to get fully vaccinated. The plan must be approved by parliament, and that’s not guaranteed given criticism of it from within Prime Minister Boris Johnson’s own party.

The government also hasn’t ruled out expanding the programme to bars and other venues. “We reserve the right to mandate certification at any point, if it is necessary to reduce transmission,” Johnson said on July 19.

The debate over vaccine passports appears to be heating up. Some politicians want it to be mandatory for attending sports events and concerts, and others warn this would discriminate against people who didn't have a chance to get vaccinated or just don't want to. Helge Braun, Merkel’s chief of staff, raised the prospect of the former over the weekend. The unvaccinated would have to curb contact in the event of a high level of infections in Germany and would be banned from “restaurants, movie theatres and stadiums,” he told Bild am Sonntag newspaper. But Armin Laschet, Merkel’s successor as Christian Democrat leader, rejected the idea, according to Der Spiegel. Merkel herself made her views clear earlier this month: “We have no intention of going down this road,” she said. “I don’t think that we can win trust by changing what we’ve said before, no compulsory vaccinations.”

Health passes will be needed for venues with a capacity of more than 50 people — including cinemas and theatres — and the rule will extend to restaurants, cafes, nightclubs and even shopping malls from next month.

Adding to the controversy, Macron has also made vaccinations mandatory for certain sectors, though people can be excused for valid health reasons. Health workers have until Sept. 15 to obtain a pass. Employees of public venues have until Aug. 30. The pass will be mandatory to board a train or flight, but not metros and local buses.

Italy, the original epicentre of the virus in Europe in 2020, is also restricting many leisure activities for the unvaccinated from Aug. 6. Prime Minister Mario Draghi’s cabinet decided last week that a green pass will be required to dine indoors or to enter crowded venues such as theatres, stadiums, cinemas, gyms or museums.

Draghi raised the prospect of new restrictions and damage to the economy if too few people get inoculated. “No vaccines mean a new lockdown,” he said.

In Spain rules can differ by region, and at the moment there's no clear nationwide edict about needing a green pass to access restaurants, bars and public events.

The region of Galicia in northwestern Spain is mandating a vaccination certificate or a negative Covid-19 test for indoor access to hotels and restaurants in municipalities with the highest incidence. In the Canary Islands, the same rules apply for indoor access to restaurants, hotels and certain other spaces in islands on level 4, the highest on the pandemic alert ranking. Currently that's just Tenerife.

Virus hotspot Catalonia hasn’t implemented such a measure, though it does have a late-night curfew.

Belgium will introduce a vaccine cert — which it’s calling a Covid Safe Ticket — starting Aug. 13 for outdoor events with more than 1,500 people. It will be expanded to cover large indoor events on Sept. 1. Events using the ticket can scrap distancing and mask rules. When it was announced in June, authorities planned for it to apply to indoor and outdoor events of 5,000 or more, but adjusted it last week.

In another tweak, the government changed the rules on negative Covid-19 tests, shortening the validity of both PCR and antigen results. That prompted Pukkelpop, one of Belgium's largest music festivals and a four-day event, to cancel its 2021 edition.

Austria has maintained the so-called 3-G rule for most services, including restaurants, hotels and cultural events, where customers are required to show proof of either a vaccination, recovery from the virus or a recent negative test. The government last week tightened rules on access to nightclubs to people with full vaccination or a recent PCR test.

In Greece, since July 16, a health pass showing either a negative test or vaccine or immunisation after being infected is required to go into restaurants, bars, night clubs, cinemas. But there’s no need for the pass for the outdoor spaces of bars and restaurants.

Pubs and restaurants are allowed to reopen for indoor dining from Monday. Only those who are fully vaccinated or recovered from the Covid-19 virus within the past six months, along with children, will be allowed.

Nightclubs remain shut in Portugal. At hotels, guests need to provide a negative Covid-19 test or a vaccine certificate to check in.

Proof of vaccination is required for nightclubs and large-scale events of more than 1,000 people, though it remains possible that this could be expanded to more venues.

Croatia from Monday is limiting public gatherings to 50 people, and gatherings of vaccinated people with valid Covid passport will be limited to 1,000, Deputy Premier Davor Bozinovic said last Friday. The new measures will last until Aug. 15.

In Romania, the second-least vaccinated EU nation after Bulgaria, the vaccine certificates are currently mainly used for cross-border travel. However, Deputy Prime Minister Dan Barna said Friday that the government is considering allowing only vaccinated citizens to be allowed to go to shopping malls, which are seen as major risk venues, during weekends, while the unvaccinated can go during the rest of the week.