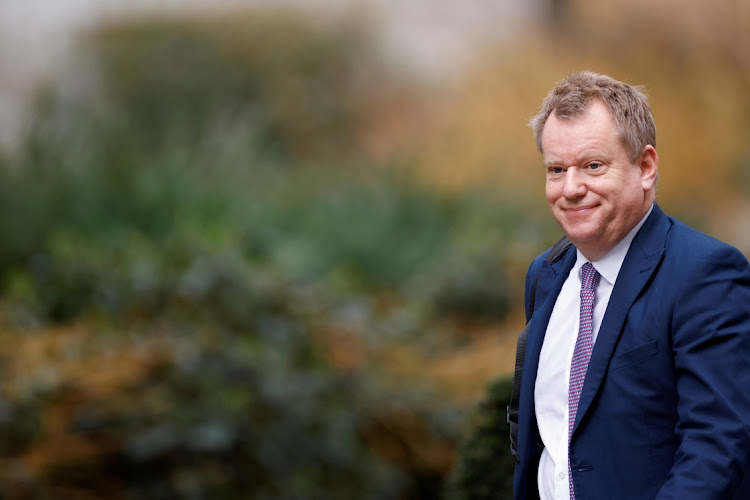 Boris Johnson’s top Brexit official, David Frost, was not picked to build bridges. Since being elevated to a cabinet position in February, the former whisky lobbyist and proud wearer of Union Jack socks has gleefully lobbed diplomatic grenades at the EU, accusing Brussels of inflexibility over Northern Ireland even as red tape bites into trade and local political tempers flare.

His latest missile, a demand to renegotiate the terms of post-Brexit trade only seven months after holding them up as a “cakeist” victory, shows that any stability secured by the 1,200-page deal has turned out to be fleeting. The EU response has understandably been a flat “non,” given the persistent lack of commitment from Johnson and Frost to upholding the deal in the first place, though it’s open to “creative solutions” provided they don’t reimpose a hard border in Ireland or open a back door into the single market.

This cycle of hostility, antagonism and piecemeal concession is likely to continue for a while, and pose a genuine challenge for the EU, which is used to a different kind of neighbour — one that aspires to join the bloc, like the Balkan states, or one that’s built up a history of single-market access, like Switzerland. The UK is turning out more like Turkey: a source of geopolitical tension for its neighbours but one that tends to slip between the cracks of pan-EU diplomacy. Dealing with a hostile UK will probably require a different, more long-term, approach.

The problem with the post-Brexit relationship is that squabbles are spilling out of the technocratic structure the EU’s negotiating team under Michel Barnier used to come up with the agreement— bringing exactly the kind of chaos that Johnson is looking for. The issue of fishing rights in British waters turned into a diplomatic incident in May, when new restrictions on licenses provoked fury from France and a threat to cut off energy supplies to the UK

More recently, the UK cynically singled out France as a country requiring Covid-19 travel quarantine even for the vaccinated — a decision openly blasted as “unscientific” by France, and one apparently taken in the final stages of a deal on migrant crossing patrols between the two countries. Alexandre Holroyd, member of the French parliament, says the French are being treated as “targets” by the British.

Frost and Johnson are unlikely to win any great victory through full-frontal assault, but they still seem content to get the crumbs of domestic Brexiter support and the odd EU concession. On Northern Ireland trade, for example, the supposedly inflexible European Commission did agree to a longer grace period for British companies selling chilled meats to Northern Ireland. But what in Brussels’ eyes looks like temporary breathing space inevitably gets held up by the Brits as an opportunity to ask for more — hence the push for renegotiation.

A purely technocratic response, designed to avoid open confrontation, isn’t going to stop this toxic pattern. Legal escalation is justified, but will it be effective? And what will it change, if the end result looks more like an Airbus-Boeing dispute at the World Trade Organization? Barnier is talking up the need for direct reprisals as provided for in the trade deal, but his influence has waned as he tries to reboot his political career in France. And the Commission has lost some credibility as a result of Covid-19, such as its hasty (and reversed) move on vaccine export controls.

And waiting for things to get serious enough for a pan-EU diplomatic response is unlikely to help matters either. The case of Turkey offers an instructive parallel: Cyprus’s failed attempts in 2020 to muster a tough united EU stance against Ankara’s drilling in the Eastern Mediterranean made the bloc look doubly weak when it also failed to agree on sanctions against Belarus (because of Cypriot resistance). If Ireland is the Brexit equivalent of Cyprus, it seems risky to wait for a full-fledged crisis there before trying to come up with a common EU position.

What should happen instead is a more concerted and UK-specific strategy from the EU, bringing in the Commission and member states — and going beyond the usual “third-country” approach. This is the kind of engagement Johnson and Frost want, and they’re likely to get, reckons Federico Fabbrini of the DCU Brexit Institute.

Such a tailor-made policy would allow the EU to wield a more convincing geopolitical stick when deciding on trade reprisals, but would also allow the union to decide on more long-term carrots for the (perhaps distant) time when a more co-operative approach is possible. Foreign security and defence is obviously one area where the bloc has been weakened by Brexit. (France is the EU’s only serious military power with nuclear capability.) And a strategic approach to the City of London, given the EU’s finance ambitions, would also help.

Until then, expect those diplomatic grenades to keep landing in Brussels — with the visible flash of a Union Jack sock.

Britons’ Christmas lunches might be a little less filling this year, thanks to Brexit, ‘pingdemic’ and soaring temperatures
Opinion
1 year ago