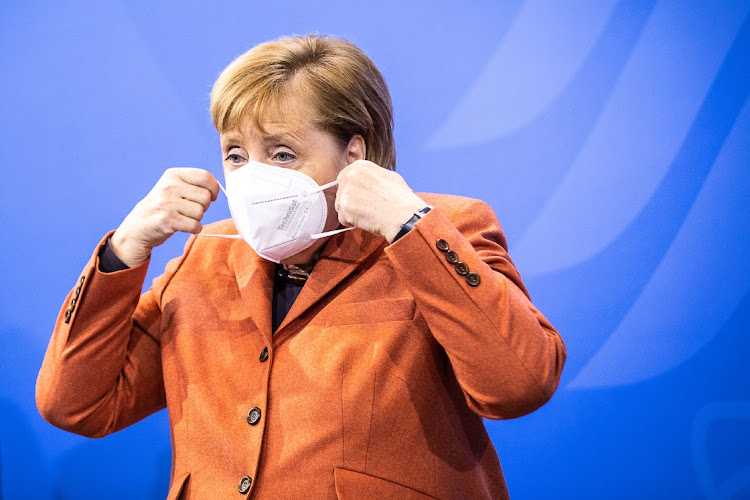 Berlin — Germany will start a hard lockdown on Wednesday as officials conceded that the coronavirus has spiralled out of control and previous attempts to contain the pandemic were inadequate.

To check the rapid spread of the disease, non-essential stores will be shuttered, employers urged to close workplaces and schoolchildren encouraged to remain at home. The stricter curbs — including a ban on gatherings over the New Year and drinking alcohol in public — will last until at least January 10 after a looser shutdown failed to halt a surge in infections and deaths.

The tighter restrictions — including bans on gatherings over the New Year and drinking alcohol in public — will last until at least Jan. 10 after a looser shutdown failed to halt a surge in infections and deaths.

“There is an urgent need for action,” Chancellor Angela Merkel said after talks with the heads of Germany’s 16 states on Sunday, warning of risks to the nation’s health system. “We have seen rising infections and exponential growth in recent days and that means that we have to grieve many dead.”

After comfortably handling the initial wave of the pandemic, Germany is lagging behind many of its neighbours, and officials came under increasing pressure to act days before the Christmas vacation. New cases and fatalities rose by record amounts on Friday, and more than 22,000 have died from the disease, which has infected a total of 1.35-million people in the country.

The new curbs “reflect the fact that it has got out of control”, economy minister Peter Altmaier said on Monday in an interview with Deutschlandfunk radio. “If things continue at the same pace, hospitals will be overcrowded in a few weeks.”

Bavaria premier Markus Soeder, speaking on Sunday alongside Merkel, agreed that officials have lost their grip on the pandemic, which he termed a “catastrophe”. The front-runner to succeed Merkel after next year’s elections said that if Germany isn’t careful, it “will quickly become the problem child of Europe”.

While other major European economies are gradually easing restrictions, Germany faces the risk of another blow to consumer and business confidence after the spring lockdown triggered a collapse in activity.

A soft shutdown from early November — which closed bars, gyms and theatres but allowed most of the economy to continue operating — failed to bring the virus back under control, putting hospitals under strain and complicating contact tracing. The stumbles in dealing with the disease are linked to its complex and at times dysfunctional federal system.

Officials have said the seven-day incidence rate needs to come down to 50 per 100,000 and stay there. The measure rose to a record 176 on Monday, according to the RKI public health institute, while the number of coronavirus patients in intensive care rose to 4,583, also the highest since the start of the outbreak.

The government is trying to limit the impact on the economy, providing emergency relief for businesses in November and December in the amount of around €15bn ($18.2bn) a month. Officials have warned that such assistance can’t continue into 2021, with Germany already taking on tens of billions of euros of new debt this year and next.

A less generous programme that compensates for fixed costs such as heating and rent has been extended until the end of June and expanded. Finance minister Olaf Scholz estimated on Sunday it will cost the federal government about €11bn per month during a hard lockdown.

Instead of brightening the mood before the holidays by loosening curbs, Germans face the psychological blow of tighter restrictions as 2020 draws to a close and before a vaccine is rolled out — likely starting early next year.

Still, the gloom is relative. Germany’s outbreak never neared the highs in countries such as France, the UK and Spain, and contagion rates remain less severe than in more than half of Europe.

As the year-end approaches, the question is where to from here?
Opinion
4 months ago

LUNCH WITH THE FT: Erno Rubik: ‘The cube has his own voice’

CHRIS GILMOUR: UK is in an unprecedented, long-lasting slump, but SA can bounce back quickly

LUNCH WITH THE FT: Ahdaf Soueif: ‘I have a lot of friends in prison’