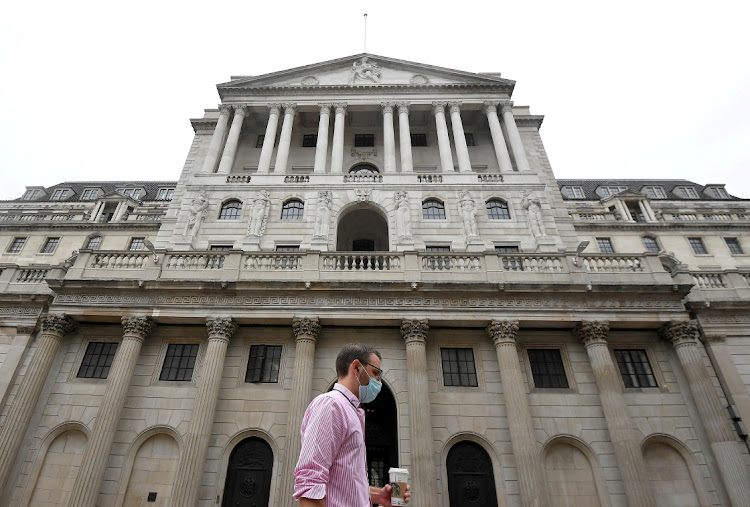 A man wearing a protective face mask walks past the Bank of England in the City of London, Britain. Picture: REUTERS/TOBY MELVILLE

London — The Bank of England (BoE) increased its already huge bond-buying stimulus by a bigger-than-expected £150bn as it prepared for economic damage from new coronavirus lockdowns and the looming risk of Brexit.

The BoE raised the size of its asset-purchase programme to £895bn, £50bn more than expected by most economists in a Reuters poll.

The central bank said that would give it enough firepower to stretch its buying of government bonds through to the end of 2021.

The bank cut its forecasts for Britain’s economy, which it now expects to exceed its size before the Covid-19 pandemic only in the first quarter of 2022. Previously, the BoE had expected the recovery to be complete by the end of 2021.

“The outlook for the economy remains unusually uncertain,” the BoE said. “It depends on the evolution of the pandemic and measures taken to protect public health, as well as the nature of, and transition to, the new trading arrangements between the EU and the UK.”

The BoE kept its benchmark bank rate at 0.1%, as expected in the poll, while it looks into the feasibility of taking borrowing costs below zero for the first time.

There was almost no mention of negative rates by the BoE in the minutes of its meeting and its quarterly outlook report on Thursday.

Sterling rose against the dollar and the euro after the announcements.

It predicted Britain’s economy would shrink by 2% during the fourth quarter of this year, as England re-enters lockdown, and fall by 11% in 2020, more severe than the 9.5% contraction it forecast in August.

But its two-year inflation forecast remained unchanged at 2%, the central bank’s target.

“Our view is that inflation will be closer to 1.5% by the end of 2022. That’s why we believe the Bank will still have to increase its policy support,” Ruth Gregory, an economist at Capital Economics, said.

Britain’s economy has been supported by a surge in debt-fuelled spending by the government. The BoE is buying up many of those bonds.

Finance minister Rishi Sunak is due to speak in parliament later on Thursday about his support for the economy.

Despite the spending, Britain faces the worst peak-to-trough contraction of any Group of 20 economy, Moody’s Investors Service said on October 16 when it cut Britain’s credit rating.

That was before Prime Minister Boris Johnson announced a month-long “stay-at-home” lockdown for England that came into force on Thursday.

Britain also faces the risk of a trade shock when its post-Brexit transition with the EU expires on December 31.

So far, London and Brussels have failed to strike a new agreement. The BoE’s monetary policy committee (MPC) said trade would suffer even if there is a deal.

“There is uncertainty around the extent to which the initial adjustment to new trading arrangements with the EU will affect activity,” the BoE said.

“The MPC’s projections are also conditioned on the assumption that cross-border trade falls temporarily in the first half of 2021 as businesses adjust to the new trading arrangements with the EU.”

GDP is likely to fall 1% in the first quarter of 2021, limiting recovery from the fourth-quarter lockdown.