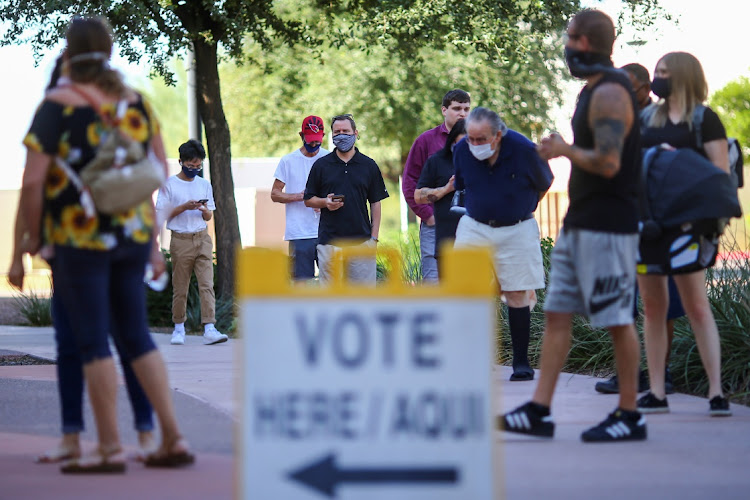 People line up to cast their vote at a polling station on election day in Surprise, Arizona, US, on November 3. Picture: REUTERS/EDGARD GARRIDO

As we wrote on Tuesday, the thing to look out for is the aftermath, rather than the actual result, which polls had indicated would deliver the presidency to Democratic Party challenger Joe Biden.

With the economy in the grip of a Covid-induced slump, traders were also pricing in optimism that a so-called “blue wave”, in which the Democrats wrested control of the Senate from the Republicans, would make it more likely that a sufficiently sized economic stimulus would be agreed. By Wednesday afternoon, the wave hadn’t materialised and the chances of it doing so later were seen as fading.

This was not a judgment about whether President Donald Trump or Biden would be good for the economy, but rather a hope that legislative paralysis would end. And that is why markets slumped after results showed that Trump had won the key battleground states of Florida and Ohio, with some others too close to call or with not enough votes counted to enable a call to be made, causing a reversal of some of the risk-on trade that had dominated into the opening of polling stations on Tuesday.

Having strengthened to less than R16/$, its strongest level since March, the rand weakened in early trade on Wednesday as investors sought the safety of US treasuries and other developed-markets safe assets. The dollar was a beneficiary, gaining against other currencies including the pound.

Because of the dollar’s role as the world’s pre-eminent reserve currency, it tends to gain during times of volatility and uncertainty, and it matters little if the US is the source of the market dislocation, as has been the case over the past four years, whether the headlines were about the trade war with China or the assassination of an Iranian general.

What the markets will be dreading is a drawn-out process in the courts. Trump has predictably made noises about taking a challenge about the results to the supreme court, which, as he likes to point out, has three members he has picked.

The polls had barely closed and he declared himself the winner, falsely as US media pointed out.

He also repeated widely discredited claims of fraud in mail-in voting, and demanded that counting be stopped, which would disenfranchise much of the population, given the record number of early votes cast.

Usually, candidates wait for the result before condemning the process as fraudulent, which brings into question what he will say if he emerges victorious.

“Some or all of the content shared in this Tweet is disputed and might be misleading about an election or other civic process,” read a warning from Twitter after Trump used his pulpit on the social media network to claim that the Democrats were stealing the election.

With some results not due until Thursday or Friday, there is a high risk there might not be clarity by the time SA markets open, and there could be more turbulence.

Once the dust has settled, there will be debates about whether the Trump presidency — irrespective of if it will end in January or four years later — has fatally damaged US democracy. Allies and enemies alike will have sleepless nights at least over the next day or so.

The implications globally are varied and crucial.

In the UK, will a Trump victory embolden the proponents of Brexit to abandon a deal with the EU in the hope they will strike one on trade with the US? Will a defeat revive global co-operation to address the existential threat posed by climate change? It’s unclear what it’ll mean for Africa’s relations, and this might have much to do with what happens between China and the US.

The only thing that’s certain is that no part of the world will be left untouched by the drama in America.