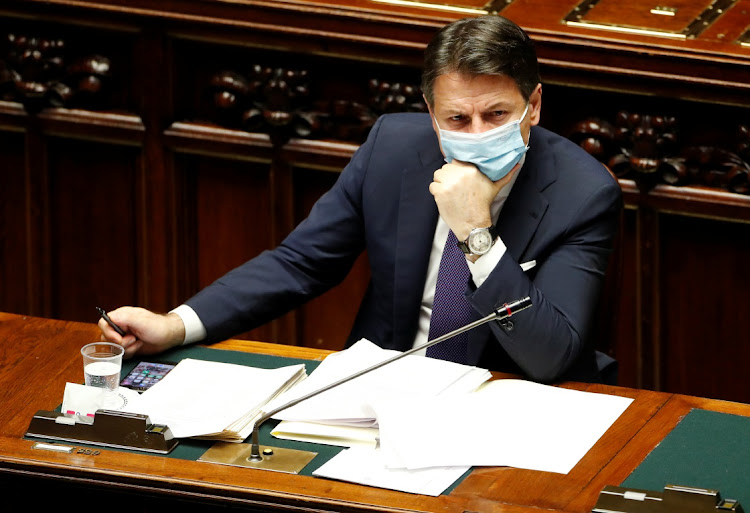 Italian Prime Minister Giuseppe Conte reacts as he addresses members of the lower house of parliament during a session on Covid-19) restrictions, in Rome, Italy, November 2 2020. Picture: REUTERS/REMO CASILLI

Rome — Italy will tighten Covid-19 restrictions but is holding back from reintroducing a nationwide lockdown, Prime Minister Giuseppe Conte said on Monday, seeking to respond to a surge infections, hospital admissions and deaths.

Conte told parliament tougher measures, including limiting travel between the worst-hit regions and an overnight curfew, were now needed given the “second wave” resurgence of the virus.

Italy's daily tally of infections has increased tenfold over the past month, setting a record of almost 32,000 on Saturday, while intensive care occupancy has also risen sharply.

“Despite our efforts ... the evolution of the epidemic in the last few days is very worrying,” Conte said, warning that intensive care units would be overwhelmed in 15 of Italy's 20 regions by December unless tougher action was taken.

“We must intervene with more stringent measures,” he told legislators, saying the country would be divided into three areas depending on the risk level, with certain places facing tighter restrictions than others.

Risk levels would be set according to a set of 21 parameters including the number of people with symptoms, infection rates and availability of hospital beds, Conte said.

Intensive care patients rose above 2,000 on Monday, the health ministry reported, more than when Italy went into full nationwide lockdown during its first wave in the spring.

New infections rose to 22,253  over the past 24 hours, down from almost 30,000 the day before, reflecting a steep drop in the number of swabs conducted. Cases normally drop on Mondays, and the ratio of positive tests to total tests remained stable.

Italy, the first European country to be hit hard by the virus, has recorded more than 38,000 deaths since the outbreak first emerged in late February, the second highest toll in the continent after Britain.

The latest measures will be included in a government decree to be issued in the next few days, the fourth such decree adopted in less than a month as Conte has progressively ramped up efforts to slow the epidemic, with little success.

He did not spell out which measures will be imposed on the worst affected areas, but said stronger nationwide restrictions would include the closure of shopping centres at weekends and reducing the capacity limit on public transport to 50% from 80%.

He also announced a nationwide night curfew but did not say when it would take effect.

Gyms, cinemas and theatres are already shut all over Italy, bars and restaurants must close at 6pm, people must not host more than six guests in their homes and masks are obligatory outdoors and in public buildings.

Conte said he knew what damage the new curbs would cause to business activity just as it was recovering from Italy's first lockdown between March and May, but safeguarding health was the only way to help the economy in the medium term.

“The more effective we are in reducing contagion, the faster we will be able to ease restrictions and avoid an unsustainable deterioration of our economic and social fabric,” he said.

Using supercomputer models and a chemical library of 500-billion molecules, raloxifene is being used in trials of 450 patients
World
11 months ago