With the Nord Stream 2 gas pipeline in play, and all EU states having veto powers, Alexei Navalny’s poisoning may lose retaliatory leverage quickly 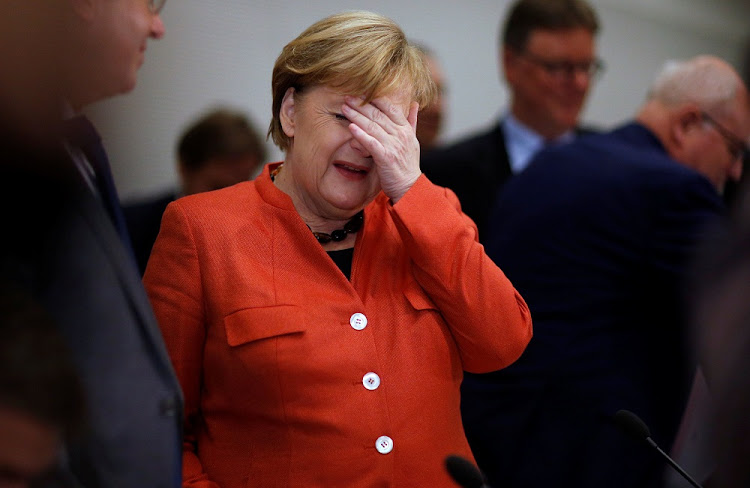 Berlin/Moscow — German Chancellor Angela Merkel and her European allies are preparing to retaliate against Russian President Vladimir Putin’s government over the poisoning of one of his top critics but their plans may not make much of an impression on the Kremlin.

Although countermeasures are all but inevitable, the EU action may consist of asset freezes and travel bans for Russian officials, according to officials familiar with the discussions. The almost completed Nord Stream 2 gas pipeline between Russia and Germany, Putin’s real weak point, is likely to be spared, officials said.

Taking action against security officials would have limited impact in Moscow, although it would be “painful” if major business figures and top officials were targeted, said Ivan Timofeev, an expert from the Russian International Affairs Council, a Kremlin-founded research group.

The finding by the top global chemical-weapons watchdog on Tuesday that a banned nerve agent from the Novichok family had been used to poison Alexei Navalny puts the onus on EU policymakers to take action against Putin.

“Any use of chemical weapons is a grave act and cannot go without consequences,” Merkel’s chief spokesperson Steffen Seibert said after the Organisation for the Prohibition of Chemical Weapons (OPCW) published its conclusions. “Over the coming days, urgent discussions will take place in the executive council of the OPCW and among EU partners on the next steps to be taken.”

The poisoning of Navalny, who is recovering in Berlin, has returned the focus to Russia’s history of aggression since Putin seized the Crimean peninsula from Ukraine in 2014. Merkel telegraphed the personal importance of the issue by visiting Navalny in the hospital shortly after he woke from a medically induced coma.

German prosecutors say the Russian government was also to blame for a cyberattack on the Bundestag five years ago and a gangland-style killing in a Berlin city park in 2019. The trial for the murder began on Wednesday in the German capital.

But even though German officials are firmly convinced the attack on Navalny was ordered from the top, it may not be enough to persuade them to ditch the incremental approach which has frustrated allies such as the US. The Germans have vowed that any action will be taken in concert with the EU, and European officials have been drawing a distinction between the Navalny affair and the 2018 poisoning of former Russian spy Sergei Skripal, which triggered the co-ordinated expulsion of more than 150 Russian diplomats.

The Skripal attack took place on British soil, whereas Navalny, who fell violently ill on a flight to Moscow in August, was targeted in Russia, the officials said. That may well mean a lesser response as officials are aiming to calibrate their action precisely to ensure it is legally airtight. And that’s on top of the veto powers that all 27 EU member states have over foreign policy, which makes agreeing on sanctions an exercise in compromise.

For his part, Navalny urged the EU to impose travel bans and asset freezes on Putin’s inner circle, a group he accused of murder and embezzlement to keep the Russian president in power.

“Sanctions against the whole country don’t work,” Navalny told Bild newspaper in an interview published on Wednesday. “The most important thing is to impose entry bans against profiteers of the regime and to freeze their assets — oligarchs and high officials, Putin’s closest circle.”

Nord Stream 2, the controversial Gazprom project that is set to double the amount of Russian gas directly to Germany under the Baltic Sea, is also probably off the table. The tumultuous debate in Berlin over whether the pipeline should be called into question was effectively quashed by Merkel, who said potential sanctions must be decided at the EU level and isn’t a bilateral issue with Berlin.

Since then, officials in Berlin have grown dismissive of the notion that the pipeline will be a target. Taking aim at Nord Stream never gained traction within Merkel’s coalition, particularly with junior partner, the Social Democrat Party (SDP).

German economy minister Peter Altmaier, who rarely steps out of line with the chancellery, said he is also opposed to taking measures against the pipeline.

Dietmar Woidke, the SPD premier of the eastern state of Brandenburg, said last week that consumers would rely on Nord Stream, which shouldn’t be in the toolbox for punishing Putin.

“Everything must be done to get Moscow to clarify the Navalny case without reservations — but I’m against saying we end this project to punish Putin,” Woidke said in an interview with Bloomberg News last week in the state capital Potsdam. “We should ask ourselves whether we can do without this project.”

Timofeev said the US could opt for harsher measures, including financial restrictions, pointing out that President Donald Trump’s administration stopped short of targeting the key market for rouble debt in 2019 when it retaliated for the Skripal poisoning.

Russia will also be given a window of opportunity to take its own action after Merkel and others have demanded a full investigation.

Moscow says it has no evidence that Navalny was poisoned and officials have called the case a set-up by Western security services, accusing the opposition leader of taking instructions from the US Central Intelligence Agency. Navalny has been released from the hospital and publicly blamed Putin for the attack, a charge the Kremlin called “insulting”.

As anti-Putin sentiment gains ground, and the opposition not letting up despite Navalny’s absence, local elections are likely to change
Opinion
10 months ago

Vice-chancellor Olaf Scholz is associated with two major financial affairs, the CumEx-Files tax scam and the demise of Wirecard
World
10 months ago
Next Article

EU to freeze Belarus assets and wants Alexander Lukashenko to hold a new ...

EU to freeze Belarus assets and wants Alexander Lukashenko to hold a new ...