Accident will not affect the market, company says 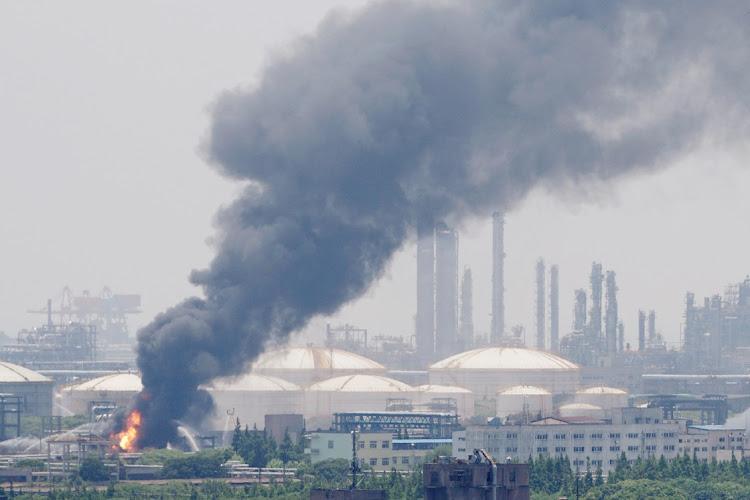 Smoke billows from a Sinopec Shanghai Petrochemical plant where a fire broke out, in Jinshan district of Shanghai, China, June 18 2022. Picture: ALY SONG/REUTERS

Beijing — A fire killed one person at a Sinopec Shanghai Petrochemical plant in Shanghai on Saturday, an accident that will not significantly affect the market, the company said.

Roaring fire was seen engulfing part of a sprawling factory, emitting columns of thick black smoke, in a video posted on Twitter by the state-backed Shanghai Daily.

The fire at one of China’s biggest refining and petrochemicals plants started on Friday and had been brought under control  but “was difficult to handle”, state media Xinhua reported, citing fire officials.

Video posted online by Xinhua from midmorning showed a smaller fire but with black smoke still billowing out of the facility.

The driver of a third-party transport vehicle died and a company employee suffered a minor injury, said a Sinopec representative. He said the fire affected the ethylene glycol facility at the plant in Jinshan, a southwestern suburb of China’s financial capital.

Shanghai Petrochemical said on its official Weibo account it will co-operate with a government investigation into the accident. The shutdown will not have a significant impact on the market, it said. The company said it had found no impact on the surrounding water.

The plant has processing capacity for 16-million tonnes of crude oil a year and 700,000 tonnes of ethylene, according to its website. It is building a 3.5-billion yuan carbon-fibre project as it seeks to diversify away from refining, and focus on resin and fibres.

Shanghai to lock down seven districts as Covid infections rebound

Latest restrictions are raising concerns that the reopening of China’s biggest city is backsliding as officials fear a resurgence of infections after ...
News
3 weeks ago