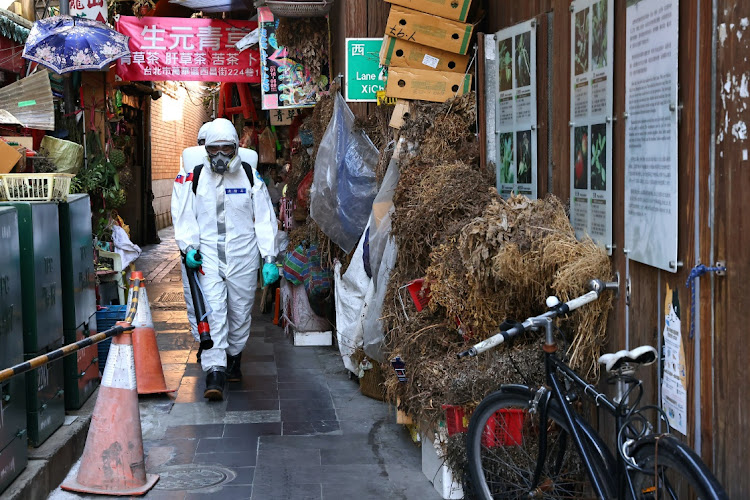 Soldiers disinfect Wanhua district, an area that has one of the most Covid-19 cases in Taipei, Taiwan, May 16 2021. Picture: REUTERS/ANN WANG

Singapore and Taiwan, success stories in containing Covid-19, are both rapidly imposing aggressive restrictions at home — and tightening travel between each other.

In Taiwan, authorities shut down cinemas and entertainment venues and encouraged people to stay at home this weekend. Indoor family and social gatherings in Taipei will be limited to five people, while outdoor ones will be restricted to 10. A record 206 new local cases were reported Sunday, after the addition of 180 infections the day before.

In Singapore, indoor dining at restaurants has been banned and working from home will now be the default, as the city-state reimposed lockdown-like measures it last ordered a year ago.  Seven schools will switch to home-based learning to “ring-fence” those affected by infections, as the city-state makes plans to vaccinate those below 16 years old.

In a post on her Facebook page, Ho Ching, the wife of Prime Minister Lee Hsien Loong, encouraged the elderly to get vaccinated, even as she cited a scarcity in the shots.

“Yes, our vaccine deliveries are slow this month and possibly next two months,” said Ho, who is also the CEO of Singapore’s state-owned investor Temasek Holdings until October.

Ho also urged Singapore residents to wear masks and avoid activities that require “masks to be down”, such as eating and drinking with others “for the next three to six weeks, possibly nine  weeks”.

Singapore’s latest curbs, announced on May 14, are in effect for one month, until June 13, according to the health ministry. The country added 49 new cases on Sunday, 18 of which are currently unlinked to known clusters. Singapore has so far confirmed more than 61,000 cases, with 31 deaths.

The outbreaks and virus-control measures threaten the reopening progress of regional travel. Singapore had previously allowed travellers from Taiwan to enter without a quarantine. On Saturday, it announced a ban on the entry of short-term visitors with travel history to Taiwan in the past 21 days, while requiring citizens, permanent residents and long-term pass holders to quarantine when they arrive.

Taiwan’s Central Epidemic Command Centre also demoted Singapore, along with Vietnam, to “medium-risk” from a group of low-risk places that include New Zealand, Macau and Australia, pointing to a surge in infections.

Meanwhile, a long-awaited quarantine-free travel corridor between Hong Kong and Singapore, two of Asia’s biggest financial centres, may not kick off as planned later in May amid the recurrence of cases in island nation.

Singapore and Taiwan have been seen as the poster children of Covid-19 control success, where locals have largely gone about everyday life without fear of infection as the virus ravaged most of the world.

Taiwan went without a single domestic coronavirus infection between April and December. In Singapore — the best place to be in the coronavirus era by Bloomberg’s Covid Resilience Ranking — people have attended concerts and gone on cruise trips.

The regression of Covid control progress shows the difficulty of sustaining a virus-free environment, especially when a low level of threat made locals reluctant to get vaccinated. In Taiwan, less than 1% people have been inoculated so far, according to the Bloomberg Vaccine Tracker. In Singapore, about a third of the population has received one dose.

As a sign of the unpredictability in containing the pandemic, authorities in mainland China, which has been free of locally transmitted cases for about a month, recently reported a handful of local cases in the provinces of Anhui and Liaoning.

DESNÉ MASIE: As Brits look forward to a pint in the pub, total freedom may be at risk

A decision should be made soon, ministry spokesperson says after announcement fails to materialise
World
2 months ago