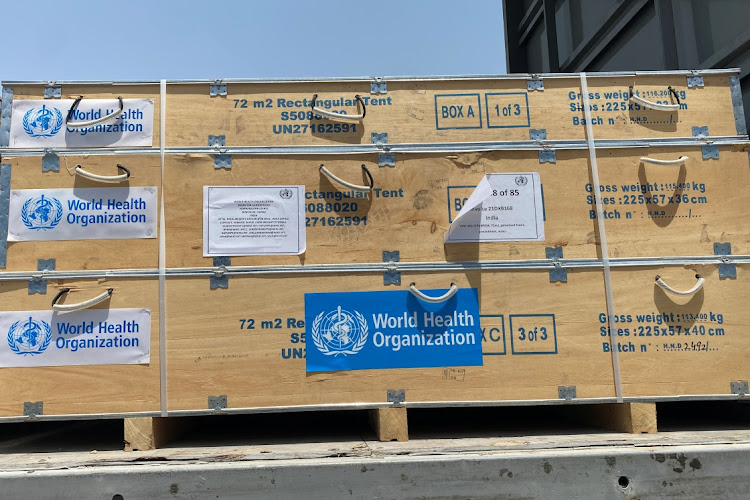 Medical supplies from WHO are pictured as they are ready to be sent to India at the International Humanitarian City in Dubai on May 9 2021. Picture: REUTERS/ABDEL HADI RAMAHI

Melbourne — The World Health Organization (WHO) should be overhauled and given more authority to investigate global disease threats, according to a review of the international Covid-19 response that found myriad failures, gaps and delays allowed the coronavirus to mushroom into a pandemic.

While stopping short of assigning blame to any particular factor, the report released on Wednesday by an independent panel co-chaired by former New Zealand prime minister Helen Clark linked the severity of the global outbreak to deficiencies across governments, the WHO and other multilateral organisations, and regulations that guide official actions.

The panel also called for an agreement to waive vaccine patents, limited terms for WHO leaders, and an oversight body and legally binding treaty to bolster the prevention and response to future pandemics. The international system, the panel said, remains unfit to avoid another disease from spiralling into one matching Covid-19, which threatens to cost the world economy $22-trillion by 2025.

“The situation we find ourselves in today could have been prevented,” former Liberia president Ellen Johnson Sirleaf, the panel’s other co-chair, told reporters over Zoom on Monday. “This was partly due to a failure to learn from the past.”

In the first weeks of the pandemic the WHO could have warned countries to assume that the SARS-CoV-2 virus was spreading among people as a precaution, according to the panel, which was established at the request of the World Health Assembly, the WHO’s decision-making body, a year ago.

The WHO could have declared the outbreak in Wuhan, China, a public health emergency of international concern — the highest level of global alert — by at least January 22 2020, Clark said.

The role of the WHO and its director-general have been contentious from the early days of the pandemic as governments sought to understand how the virus emerged and was allowed to spread unchecked.

The UN agency came under blistering criticism from former US president Donald Trump, who claimed it had coddled China, allowing it to conceal the origin of the virus. He threatened to withhold funding.

The WHO was hindered by its regulations, which are not conducive to taking a precautionary approach, according to Clark. The “slow and deliberate pace” with which information is treated under the International Health Regulations and the alert system used were out of step with a fast-moving respiratory pathogen and the swift availability of information through digital tools and social media, the panel found.

The WHO should have the power to investigate outbreaks speedily, with guaranteed rights of access and with the ability to publish information without waiting for a member state’s approval, Clark said.

“Sensitivities about sovereignty cannot delay alerting the world to the threat of a new pathogen with pandemic potential,” she told the media briefing.

The elevation of the Covid-19 threat to WHO’s highest level of alert on January 30 2020 failed to trigger an urgent, co-ordinated, worldwide response, the panel found. It called for disease surveillance and alert systems to be overhauled to function at “near-instantaneous speed” to detect and verify signals of potential outbreaks.

Most countries failed to heed the warning, choosing to wait and see rather than take firmer measures that could have contained the virus, Clark said, adding that February was “a month of lost opportunity”.

“For some, it wasn’t until hospital ICU [intensive-care unit] beds started to fill that more action was taken — and by then it was too late,” she said. “There were also countries which devalued science, denied the severity of Covid-19, delayed responding and sowed distrust among their citizens, with deadly consequences.”

Though missed opportunities and failure to act characterised much of the early response to Covid-19, the panel found areas in which early action was taken to good effect: the rapid containment of the virus by some countries, including South Korea, Vietnam and New Zealand, and the unprecedented speed at which the virus genome was sequenced and vaccines were developed.

“Science delivered when the world needed it most, and the world benefited wherever there was open sharing of data and knowledge,” said Johnson Sirleaf.

The Harvard-educated former banker said the WHO and the World Trade Organization (WTO) should help broker an agreement among major vaccine-producing countries and manufacturers on voluntary licensing and transferring vaccine technology to third parties.

“If actions do not occur within three months, a waiver of intellectual property rights under the Agreement on Trade-Related Aspects of Intellectual Property Rights (Trips) should come into force immediately,” Johnson Sirleaf said.

While manufacturing needs to be scaled up urgently, the panel called on wealthy countries with adequate vaccine coverage to commit to providing at least 1-billion doses by no later than September 1 to 92 countries that lack adequate supplies, and to increase that to a total of 2-billion by mid-2021.

The panel also called for:

“Covid-19 is the 21st century’s Chernobyl moment — not because a disease outbreak is like a nuclear accident but because it has shown so clearly the gravity of the threat to our health and wellbeing,” the report said. “It has caused a crisis so deep and wide that presidents, prime ministers and heads of international and regional bodies must now urgently accept their responsibility to transform the way in which the world prepares for and responds to global health threats.”

A WHO emergency listing allows the shot to be included in Covax, the global programme to provide vaccines mainly to poor countries
World
1 month ago

Ten WTO meetings in seven months have failed to produce a breakthrough, with 60 proposal sponsors from emerging economies
World
1 month ago

Infections surge past 21-million in nation, with a death toll of 230,168
World
1 month ago
Next Article