The mascot was called Tritium after the byproduct of nuclear power generation, the discharge of which is a common and safe practice 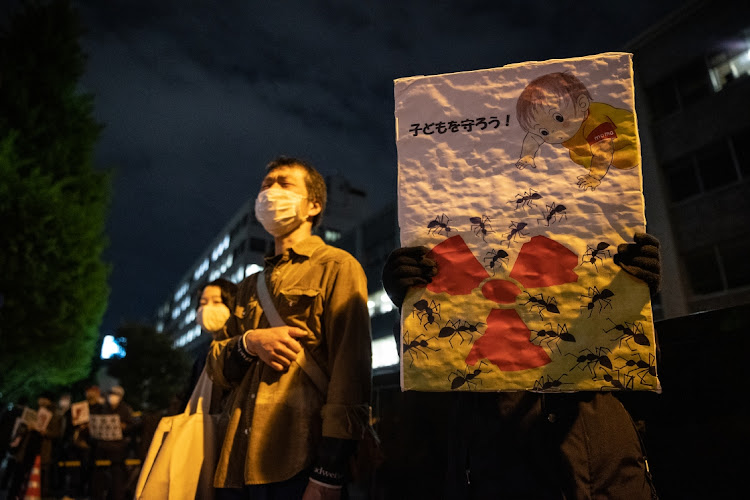 People demonstrate outside the prime minister's official residence on April 13 2021 in Tokyo, Japan over the owner of Fukushima nuclear plant being allowed to discharge wastewater into the ocean. Picture: GETTY IMAGES/TAKASHI AOYAMA

Singapore — Amid criticism at home and abroad over plans to release treated water from the wrecked Fukushima nuclear power plant into the ocean, Japan’s officials turned to a familiar playbook: use a cute character to explain the safety of the move.

Within just a day, the big-nosed, tadpole-like character called Tritium — which looks a bit like a Pokemon and is named after the radioactive element the the government plans to dilute and release into the ocean — was scrapped and an apology issued.

As part of promotional material released after Prime Minister Yoshihide Suga announced Japan would begin releasing more than a million cubic metres of filtered water into the ocean in two years, the character was intended to explain to locals that the water isn’t hazardous. But after a wave of criticism on social media and in parliament, the reconstruction agency said it would temporarily retire and redesign the character on Wednesday.

The episode highlights the struggles Tokyo faces in convincing not just its neighbours but also the public that it can safely release the tritium-tainted water into the ocean. Some 57% of Fukushima prefecture residents oppose the release, according to a poll from February.

The move has also been loudly criticised by China, South Korea and Taiwan. “As some politicians in Japan are so desperate to prove that nuclear-waste water is safe, then they can use it to drink, cook, wash clothes and for irrigation as well,” said Chinese foreign ministry spokesperson Zhao Lijian at a regular briefing Thursday in Beijing.

The materials were created by advertising giant Dentsu, an official told parliament on Wednesday, as part of a nearly $3m budget for educating the public about radiation.

These kinds of comic characters, known as yuru-chara, are used all across Japan as mascots for everything from regional sports teams to the police force. Tepco, the utility at the centre of the Fukushima disaster, starting using a chubby bunny as its mascot in 2018 to help rehabilitate its image.

Tritium is a form of hydrogen that has two extra neutrons, making it weakly radioactive. It is naturally produced in the upper atmosphere and is also a common byproduct of nuclear power generation. It is a common and safe practice for the world’s nuclear power plants to discharge small amounts of tritium and other radioactive material into rivers and oceans, according to the International Atomic Energy Agency.

Move is in response to the sabotage of its Natanz nuclear site at the weekend, which it has blamed on Israel
World
9 months ago