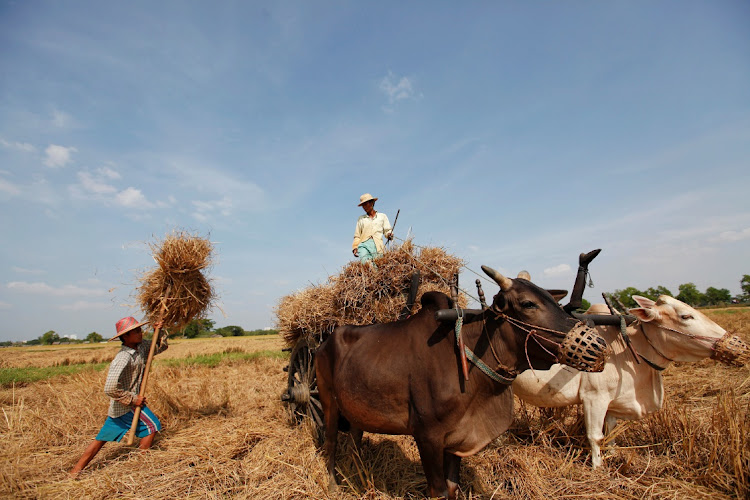 Farmers work in a rice field in Dala township, near Yangon, in this November 23 2011 file photo. In the first half of the 20th century, when it was known as Burma in Britain's eastern empire, Myanmar and its lush Irrawaddy delta were celebrated as the "rice bowl of Asia," leading the world in rice exports. Picture: REUTERS/SOE ZEYA TUN

Singapore — The UN food agency said on Tuesday rising food and fuel prices in Myanmar since a February 1 military coup risk undermining the ability of poor families to feed themselves.

Myanmar has been in turmoil since the military ousted the elected government and detained its leader, Aung San Suu Kyi, with protests and a civil disobedience campaign of strikes paralysing parts of the economy.

The World Food Programme (WFP) said food prices were rising with palm oil 20% higher in some places around the main city of Yangon since the beginning of February and rice prices up 4% in the Yangon and Mandalay areas since the end of February.

In some parts of Kachin state in the north, the price of rice was up as much as 35%, while prices of cooking oil and pulses were sharply higher in parts of Rakhine state in the west, the WFP said.

The cost of fuel had risen by 15% nationwide since February 1, raising concern about further food price increases, it said.

“These rising food and fuel prices are compounded by the near paralysis of the banking sector, slowdowns in remittances, and widespread limits on cash availability,” the WFP said.

The agency’s country director, Stephen Anderson, said the signs were troubling: “Coming on top of the Covid-19 pandemic, if these price trends continue they will severely undermine the ability of the poorest and most vulnerable to put enough food on the family table.”

A spokesperson for the ruling military council did not respond to phone calls seeking comment. State media this week reported farmers expecting good prices for their crops of onions and chickpeas.

The WFP is helping to support more than 360,000 people in Myanmar, most of them displaced by conflict over the past decade.

The agency reiterated a call from the UN secretary-general for the will of the Myanmar people expressed in November elections to be respected, Anderson said, adding: “At WFP we know all too well how hunger can quickly follow when peace and dialogue are sidelined.”

The military defended its coup saying its complaints of fraud in a November election won by Suu Kyi’s party had been ignored. The election commission said the vote was fair.

A total of 183 people have been killed by security forces in protests against the coup, a rights monitoring group said.

Myanmar, once Asia’s main rice basket, was among the region’s poorest countries after the military seized power in a 1962 coup and imposed an autarchic “way to socialism”.

The economy boomed after the military began to withdraw from politics a decade ago.

With more than 60 protesters dead, some police are fleeing to India rather than shooting their ‘own people who are peaceful demonstrators’
World
8 months ago
Next Article