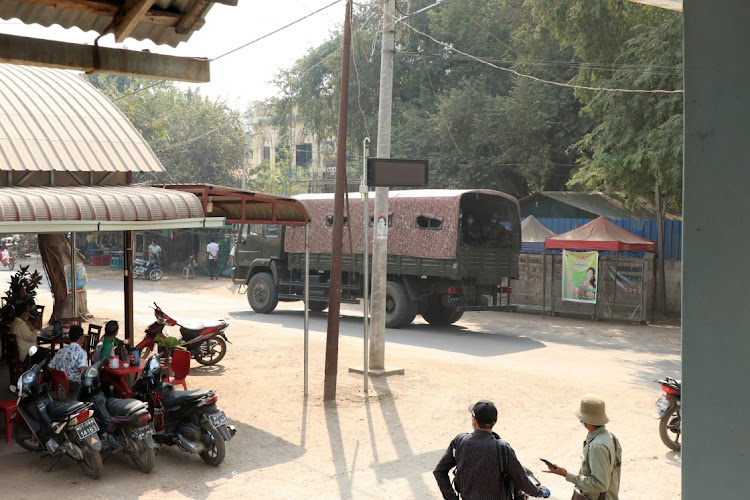 A security forces vehicle during a protest in Nyaung-U, Myanmar, on March 8 2021. Picture: VIA REUTERS SUPPLIED BY A THIRD PARTY

Shops, factories and banks were closed in Myanmar's biggest city Yangon on Monday after major trade unions called for a shutdown of the economy as part of the uprising against the country’s military rulers.

Witnesses said troops fired shots in the air at several places around the Southeast Asian nation and were checking cars in central Yangon to prevent protesters from gathering.

Nevertheless, crowds demonstrating against February’s coup gathered there as well as the second-biggest city, Mandalay, and in Monywa, a town to the west, according to videos posted on Facebook. Protesters in Dawei, a coastal town in the south, were protected by the Karen National Union, an ethnic armed group engaged a long-running war with the military.

Protesters waved flags fashioned from htamain (women's sarongs) in some places or hung them up on lines across the street to mark International Womens Day while denouncing the junta. Walking beneath women’s sarongs is traditionally considered bad luck for men and tends to slow down police and soldiers.

State media said security forces were keeping a presence at hospitals and universities as part of efforts to enforce the law.

At least nine unions covering sectors including construction, agriculture and manufacturing have called on “all Myanmar people” to stop work to reverse the February 1 coup and restore Aung San Suu Kyi's elected government.

Allowing business and economic activity to continue would help the military “as they repress the energy of the Myanmar people”, the unions said in a statement.

“The time to take action in defence of our democracy is now.”

Only a few small tea-shops were open in Yangon, witnesses said. Major shopping centres were closed and there was no work going on at factories.

Protest leader Maung Saungkha on Facebook urged women to come out strongly against the coup on Monday, while Nay Chi, one of the organisers of the sarong movement, described the women as “revolutionaries”.

“Our people are unarmed but wise. They try to rule with fear, but we will fight that fear,” she told Reuters.

Police and military have killed more than 50 people to quell daily demonstrations and strikes since the coup, according to the UN.

Figures by the Assistance Association for Political Prisoners advocacy group showed nearly 1,800 people have been detained under the junta as of Sunday.

Some of the biggest protests in recent weeks took place on Sunday, with police firing stun grenades and teargas to break up demonstrations in Yangon, the northern town of Lashio and a sit-in by tens of thousands of people in Mandalay.

At least three protests were held in Yangon on Sunday, despite raids on campaign leaders and opposition activists by security forces late on Saturday.

Ba Myo Thein, a deposed legislator, said reports of bruising to Khin Maung Latt’s head and body raised suspicions that he had been “tortured severely”.

Police in the Pabedan district of Yangon, where Khin Maung Latt was arrested, declined to comment. A spokesperson for the military did not answer calls seeking comment.

The army has said it is dealing with protests lawfully.

In a statement on Monday, the military said it had arrested 41 people the previous day.

An announcement by the military carried on the front page of the State-run Global New Light of Myanmar newspaper on Monday threatened unspecified “action” against anyone who directly or indirectly works for a committee of ousted lawmakers that has declared itself the country's legitimate authority.

The announcement said the committee was illegal and had committed “high treason”. A separate report said the military and police were “maintaining” hospitals and universities.

The killings have drawn anger in the West and been condemned by most democracies in Asia.

The US and some other Western countries have imposed limited sanctions on the junta and Australia on Sunday cut defence ties, saying it would only deal with nongovernment groups in Myanmar.

Myanmar's giant neighbour, China, said on Sunday it was prepared to engage with “all parties” to ease the crisis and was not taking sides.

The fund will monitor the implementation of Kirin's plan to end the ties, Norway's central bank says
Companies
10 months ago
Next Article