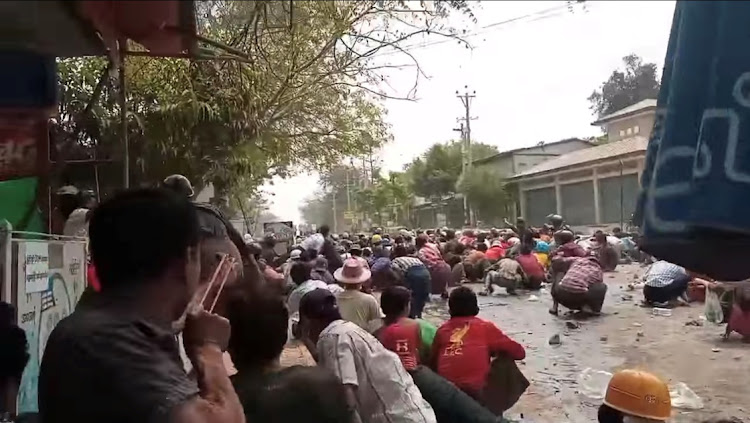 Demonstrators crouch during an anti-coup protest in Magway, Myanmar, in this still image from a social media video, March 11 2021. Picture: REUTERS

Six people were killed in the central town of Myaing when security forces fired on a protest, a demonstrator who helped carry bodies to hospital said. A health worker there confirmed all six deaths.

“We protested peacefully,” the 31-year-old man said. “I couldn't believe they did it.”

One person was killed in the North Dagon district of the biggest city of Yangon, witnesses said. Photographs posted on Facebook showed a man prone on the street, bleeding from a head wound. One death was reported in Mandalay. 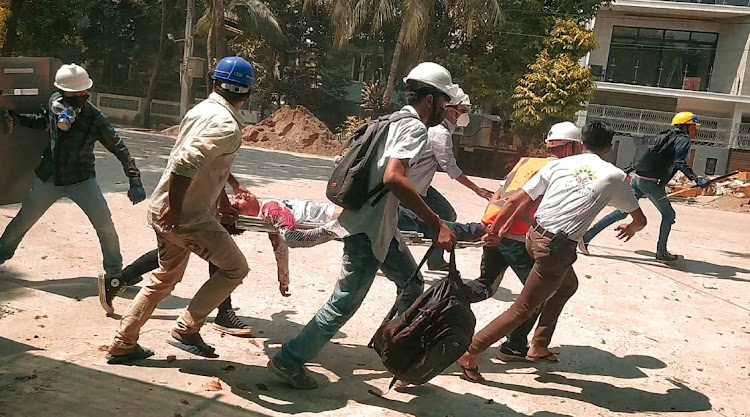 People carry Chit Min Thu on a stretcher in Yangon, Myanmar, in this still image obtained from a social media video by Reuters, March 11 2021. Picture: REUTERS

Before Thursday's deaths, an advocacy group, the Assistance Association for Political Prisoners, had said more than 60 protesters were killed and about 2,000 people detained by security forces since the February 1 coup against Suu Kyi's elected government.

Amnesty International accused the army of using lethal force against protesters and said many killings it had documented amounted to extrajudicial executions.

“These are not the actions of overwhelmed, individual officers making poor decisions,” said Joanne Mariner, Amnesty's director of crisis response.

“These are unrepentant commanders already implicated in crimes against humanity, deploying their troops and murderous methods in the open.”

The unrest was not a situation that should be of concern to the international community and the West was making assumptions that were incorrect, he said.

The military has previously said it is acting with utmost restraint in handling what it describes as demonstrations by “riotous protesters” whom it accuses of attacking police and harming national security and stability.

Zaw Min Tun also said Suu Kyi had accepted illegal payments worth $600,000 as well as gold while in government, according to a complaint by Phyo Mien Thein, a former chief minister of Yangon.

“He strongly said that,” the spokesperson said. “We have verified those facts several times. Now the anti-corruption committee is continuing the investigation.”

“It is no longer uncommon to see slander against politicians and efforts to crush the party while innocent young people are killed in public,” she said in a message.

The army has justified taking power by saying that a November election, overwhelmingly won by Suu Kyi's party, was marred by fraud — an assertion rejected by the electoral commission.

Zaw Min Tun also reiterated that the military would only be in charge for a certain period before holding an election. “We are on the road to authentic democracy,” he said.

The junta has previously promised a new election within a year, but has not set a date.

The UN Security Council on Wednesday condemned violence against protesters and urged the army to show restraint.

But language that would have denounced the military takeover as a coup or threatened possible further action was removed from the British-drafted text, due to opposition by China, India, Russia and Vietnam.

UN Secretary-General Antonio Guterres said he hoped the Security Council statement would push the military to realise it “is absolutely essential” that all prisoners are released and the results of the November election are respected.

In Myanmar, state media said the junta had removed Arakan Army (AA) insurgents from its list of terrorist groups because the faction had stopped attacks to help establish peace across the country.

The move comes as the army struggles to restrain daily protests against the coup.

The AA, which is fighting for greater autonomy in the western state of Rakhine, had become one of the most formidable forces in challenging an army that has been fighting various ethnic wars for seven decades.

Big name investors, such as Facebook and Coca-Cola, are being tested on their pledge to the country and their employees there
World
4 months ago

With more than 60 protesters dead, some police are fleeing to India rather than shooting their ‘own people who are peaceful demonstrators’
World
4 months ago