After being in top spot for 25 years, it is now part of China, coming in at 107th, and deemed ‘mostly unfree’ 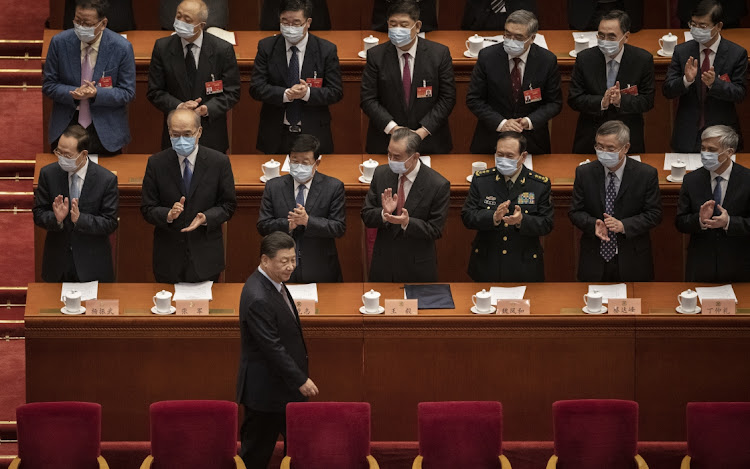 Chinese President Xi Jinping, bottom, is applauded by members of the government as he arrives to the opening session of the Chinese People's Political Consultative Conference at the Great Hall of the People on March 4 2021 in Beijing, China. Picture: GETTY IMAGES/KEVIN FRAYER

Hong Kong — A year ago, when Hong Kong was dethroned by Singapore in the annual Heritage Foundation ranking of the world’s freest economies, a top official predicted the city would soon return to the spot it had held for 25 years.

Instead, Hong Kong disappeared entirely from the latest edition of the list, published on Thursday. Together with Macau, it is now counted as part of China to reflect Beijing’s increasing sway over policy following months of pro-democracy protests in 2019.

China resides in 107th place in the ranking, sandwiched between Uganda and Uzbekistan among economies rated as “mostly unfree”.

While Hong Kong and Macau residents benefit from policies that offer greater economic freedom than on the mainland, “developments in recent years have demonstrated unambiguously that those policies are ultimately controlled from Beijing”, the study’s authors wrote.

Hong Kong remained at the top of the list of freest economies after its 1997 return to Chinese rule, buttressing the argument that it was the ideal gateway to China, with an independent judiciary, free press and deep financial markets. Officials often referred to the Heritage Foundation ranking when touting Hong Kong’s credentials as a financial hub.

The cracks in that edifice were exposed in 2019, when simmering discontent with Beijing’s rising influence boiled over into months of mass demonstrations and violence that sapped business confidence. The unrest led to Hong Kong losing its top Heritage Foundation ranking for the first time since its inception in 1995.

At the time, Hong Kong officials struck a defiant tone. “I can confidently say that the conditions that have long made Hong Kong a place with a high level of economic freedom won’t change because of what we experienced in the past,” Edward Yau, the secretary for commerce and economic development, told reporters after the 2020 ranking was published in March that year. He said he expected Hong Kong’s ranking to recover.

Yau’s office had no immediate comment on Hong Kong being dropped from the rankings.

Singapore retained the top spot in the latest report, leading a crop of just five economies the Heritage Foundation rates as “free”. The other four are New Zealand, Australia, Switzerland and Ireland.

The move to scrap Hong Kong and Macau’s independent ratings comes as top Communist Party officials prepare to meet in Beijing for the National People’s Congress (NPC), at which they’re expected to unveil more measures designed to bring Hong Kong’s pro-democracy movement to heel. In June, they imposed a sweeping national security law on the city, under the auspices of which police have arrested 100 people accused of crimes such as sedition.

Hong Kong CEO Carrie Lam, whose approval rating stood at 23% in a February survey, will attend the NPC opening ceremony in Beijing on Friday. In 2020, Lam made the unprecedented move to delay her annual policy address so she could first consult with Chinese leaders.

When she finally delivered the address in late November, it was heavy on policies aimed at integrating Hong Kong more with the mainland.

“What has become clear over the past two years is that the city’s administrators are now extremely hesitant to make policy decisions without clearance from Beijing,” said Terry Miller, an editor of the index and a director of the Centre for International Trade and Economics at the foundation. “And Beijing has shown that it is not reluctant to impose its will, and specific changes in law, on the people of Hong Kong.”

China’s ranking dropped in the latest economic freedom index, trailing far behind other large Asian economies such as Japan and South Korea — in part because business there is still dominated by large, opaque, state-linked enterprises.

The Fraser Institute, which compiles its own annual economic freedom ranking, warned in 2020 that Hong Kong’s long reign as the freest economy is at risk due to China’s efforts to quell dissent.

“Hong Kong’s importance and vitality as a financial centre have always depended on its unique position as a bridge between Chinese and Western systems,” Miller said. “That uniqueness has been eroded over time by the development of alternative channels of commercial and financial interaction between China and other countries, and also, importantly in recent years, by the loss of confidence in the fair and impartial administration of world standards of law and respect for human rights within Hong Kong itself.”