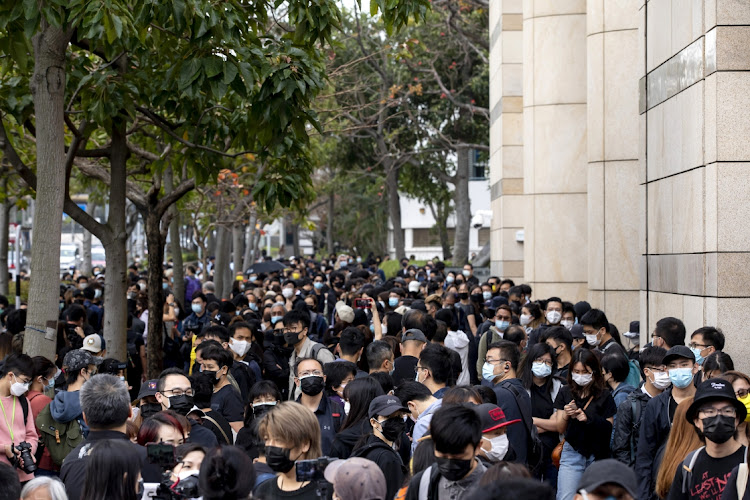 Hong Kong — Hong Kong has made its 100th arrest under a national security law imposed on the former British colony by China in 2020, while dozens of pro-democracy activists return to court for a mass bail hearing before their trial on subversion charges.

Former Next Digital executive director Stephen Ting was detained on fraud allegations, the Oriental Daily newspaper reported, citing people it didn’t identify. Police issued a statement late on Tuesday confirming the arrest of a 61-year-old man “after in-depth investigation by national security department.” Police didn’t name the person or his affiliation with Next Digital.

By Tuesday, 100 people had been arrested on suspicion of activities harming national security, police said in a separate statement on Wednesday. The accused include 83 male suspects and 17 female suspects, aged 16-79 years, police said.

One of the most high-profile operations under the security law involved the arrest of 55 opposition figures in January. They were rounded up for taking part in an unofficial primary election and accused of trying to gain a majority in the legislature to paralyse the government.

Forty-seven of those people are to attend a third day of arraignment hearings to decide whether they will receive bail before they facing trial on subversion charges. The defendants include some of the city’s most prominent activists such as Joshua Wong, Benny Tai and Jimmy Sham, and most have objected to government requests to keep them in jail while also delaying further proceedings until at least May 31.

The case comes before an annual meeting of China’s legislature opens in Beijing on Friday, with senior officials calling for legislators to overhaul the former British colony’s election system to further diminish the influence of pro-democracy politicians. Lam plans to travel to Beijing to attend the opening ceremony of the National People’s Congress.

Before the hearing started Wednesday, the owner of a local diner brought food and drinks to supporters of the defendants outside the courthouse. “I want to support the people here,” said Cheong Wong. “This is the least I can do.”

More than 80% of people arrested since the law’s enactment have been accused of participating in some form of political activity, such as displaying banners, posting in support of the city’s independence on social media or organizing primary elections for legislative seats. Some suspects have been arrested more than once. Only one previous arrest involved an allegation of violence.

“The early arrests have inevitably focused on low-hanging fruit,” said Bing Ling, a professor of Chinese law at the University of Sydney. Public expressions of anti-China sentiment are easier to prove in court and detaining high-profile individuals has a bigger deterrent effect, he said.

The law granted broad new powers to authorities to stifle opposition opinion and deter protests, such as the large and sometimes violent demonstrations that shook the Asian financial hub in 2019. Lawyers, activists and Western governments have criticised the legislation for its broadly defined provisions, which bar terrorism, secession, subversion and collusion with foreign forces.

Carrie Lam, the city’s Beijing-appointed CEO, has credited the law with restoring stability to the Asian financial center. Chinese and Hong Kong officials have said since it was announced that it targeted “extremely few” people suspected of endangering security. In June, the Hong Kong government said in a statement to Bloomberg News that it would be “irresponsible and scaremongering” to say that the law would provide the government sweeping powers to jail or disqualify opposition figures.

So far, prosecutors have brought charges against 56 of those arrested by police. One of the most prominent is Next Digital founder Jimmy Lai, who has been denied bail while awaiting trial on charges he colluded with foreign powers to impose sanctions or engage in hostile activities against Hong Kong or China. He also faces a fraud charge.

The collusion charges are based on Lai’s social media posts and comments to foreign media outlets, and on donations police say his company made to an advocacy group, according to court filings and local media reports citing police documents. Lai denies the allegations.

The 47 opposition figures are being prosecuted over their roles in helping organise a primary that drew more than 600,000 voters in July 2020 to choose candidates for Legislative Council elections that were later postponed. Authorities say the primary and plans to force the resignation of Lam using a provision of the mini-constitution were an illegal attempt to paralyse the government.

The efforts by authorities to rein in opposition appear set to continue, even though protests have mostly ended. In January, secretary for security John Lee said the government would strengthen intelligence gathering because behavior that endangered national security may be “driven underground”.