Epidemiologist and public health experts say the Covaxin approval was rushed, but efficacy data from a trial on 26,000 volunteers will be out soon 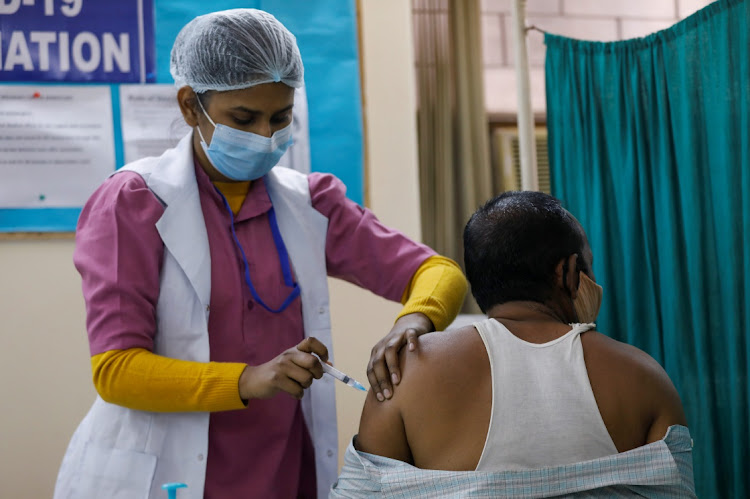 New Delhi — India is struggling to convince its health and front-line workers to take a homegrown Covid-19 vaccine controversially approved without late-stage efficacy data, government data showed on Thursday, days ahead of a wider rollout.

The country has the world’s second-highest number of Covid-19 infections after the US, with cases recently surging as mask-wearing declines and states have eased social-distancing measures. A lack of confidence in a homegrown vaccine country could prevent India from meeting its target of vaccinating 300-million of its 1.35-billion people by August.

India has vaccinated more than 10.5-million health and front-line workers since beginning its immunisation campaign on January 16. But only 1.2-million, or about 11%, of them have taken Covaxin, the locally developed vaccine from Bharat Biotech, while the remaining 9.4-million have used the vaccine licensed from AstraZeneca, according to the government’s Co-Win online platform used to track the vaccination drive.

“It’s all because of the initial discussion about how Covaxin was only an experimental vaccine, how it had not completed the phase 3 trial,” said Dr Subhash Salunkhe, who advises the Maharashtra state government on vaccine strategy.

“These things created doubts in the minds of people, resulting in lesser acceptance. The availability is not a concern at this juncture.”

However, India’s health secretary Rajesh Bhushan has attributed the lower uptake of Covaxin to Bharat Biotech’s limited production capacity compared to that of the Serum Institute of India (SII), the world’s biggest vaccine producer, which is making the AstraZeneca shot for low- and medium-income countries.

“We have found that, in proportion to the quantity of vaccine available to us, Covaxin’s off-take is fairly satisfactory,” told a news conference. His ministry did not respond to a request seeking comment on the latest figures showing that only about 12% of the ordered doses has been administered.

Earlier in February, Chhattisgarh, an opposition-ruled state of 32-million people, told the federal government it would not use Covaxin until its efficacy could be proven in an ongoing, late-stage trial. Epidemiologist and public health experts have also criticised the Covaxin approval as rushed.

Bharat Biotech has said efficacy data from the trial on nearly 26,000 volunteers will be out soon. The company, along with India’s drug regulator, says the vaccine is safe and effective based on early and intermediate studies.

Bharat Biotech did not immediately comment on the lower uptake of its vaccine.

The government is trying to expedite vaccination as cases have surged, especially in Maharashtra in the west and the southern state of Kerala, possibly as they have reopened suburban trains and schools.

Mask-wearing and social-distancing has also largely vanished, with big events such as international cricket matches being played in front of tens of thousands of spectators hardly following any Covid-19 rules.

India reported 16,738 new coronavirus infections in the past 24 hours, the highest daily jump in a month, health ministry data showed on Thursday, raising the total to 11.05-million.

More than half of the new cases were in Maharashtra, India’s richest state and home to its financial capital Mumbai, which reported a record high of 8,807 cases on Wednesday.

Nurses are among the millions of Filipinos who work overseas, providing in excess of $30bn a year in remittances vital to the country's economy
World
11 months ago
Next Article

US drug regulator clears way for emergency use of ‘safe and effective’ J&J ...

US drug regulator clears way for emergency use of ‘safe and effective’ J&J ...