Group plans to visit labs, markets and hospitals in Wuhan to investigate origins of Covid-19 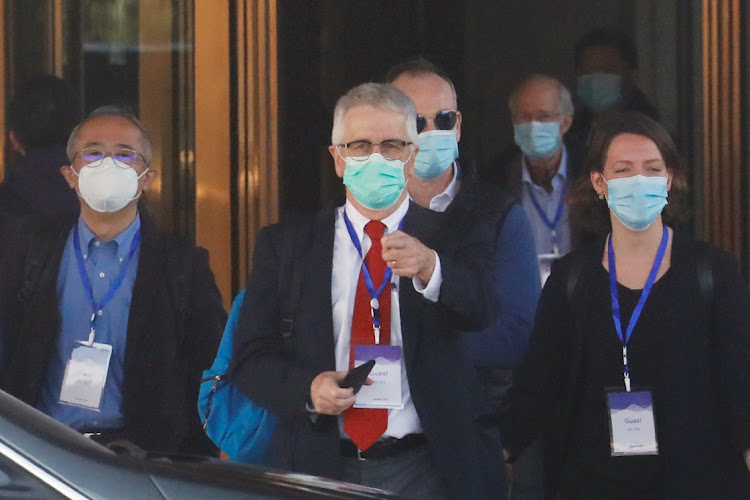 Members of the World Health Organization team tasked with investigating the origins of the coronavirus disease prepare leave a hotel in Wuhan, Hubei province, China, on January 29 2021. Picture: REUTERS/THOMAS PETER

Wuhan — A World Health Organization (WHO) led team of experts investigating the origins of the Covid-19 pandemic began meeting with Chinese scientists on Friday, and the WHO said the group plans to visit labs, markets and hospitals in Wuhan.

On Thursday, the team completed two weeks of quarantine after its arrival in China, moving to a lakeside hotel in the central Chinese city where the deadly virus emerged in late 2019.

“First face to face meeting with our colleagues. Correction: face mask to face mask given the medical restrictions. Discussing our visiting programme,” Marion Koopmans, a virologist at Erasmus University Medical Center in the Netherlands, tweeted on Friday.

“China teamleader prof Wannian joking about some technical glitches. Nice to see our colleagues after lengthy zoom meetings,” she said.

The group is expected to spend two more weeks in China, and will visit the seafood market at the centre of the early outbreak. It will also visit the Wuhan Institute of Virology. One hypothesis, rejected by China, is that the outbreak was caused by a leak at the government lab.

The WHO has sought to manage expectations. “There are no guarantees of answers,” its emergency chief, Mike Ryan, said earlier this month.

The mission has been plagued by delays, concern over access and bickering between China and the US, which has accused China of hiding the extent of the initial outbreak and criticised the terms of the visit, under which Chinese experts conducted the first phase of research.

“It is important to remember that the success of this mission and origin-tracing is 100% depending on access to the relevant sources,” Thea Fischer, a Danish member of the team, told Reuters on Thursday.

“No matter how competent we are, how hard we work and how many stones we try to turn, this can only be possible with the support from China,” she said.

The origin of Covid-19 has been highly politicised.

The investigating team had been set to arrive in Wuhan earlier in January, and China’s delay of their visit drew rare public criticism from the head of the WHO, which former US President Donald Trump accused of being “China-centric”.

China has pushed the idea that the virus existed abroad before it was discovered in Wuhan, with state media citing the presence of the virus on imported frozen food packaging and scientific papers saying it had been circulating in Europe in 2019.

China’s foreign ministry has also hinted that the sudden closure of a US army laboratory at Fort Detrick in Maryland in July 2019 was linked to the pandemic.

“At the early stage in China, it was a burden particularly for Wuhan people when everyone was calling it a Wuhan virus, which was humiliating,” said Yang You, a 30-year-old Wuhan resident. “If it could be traced to the source clearly, in my opinion, it could clear either China’s or Wuhan’s name.”

SA coronavirus variant detected for the first time in US

Johnson & Johnson is expected to release its vaccine trial data later this week. If successful, it could be a promising development for SA
Features
8 months ago
Next Article