In a country where criticising the monarchy can lead to long prison sentences, Facebook says the ban ‘contravenes international human rights law’ 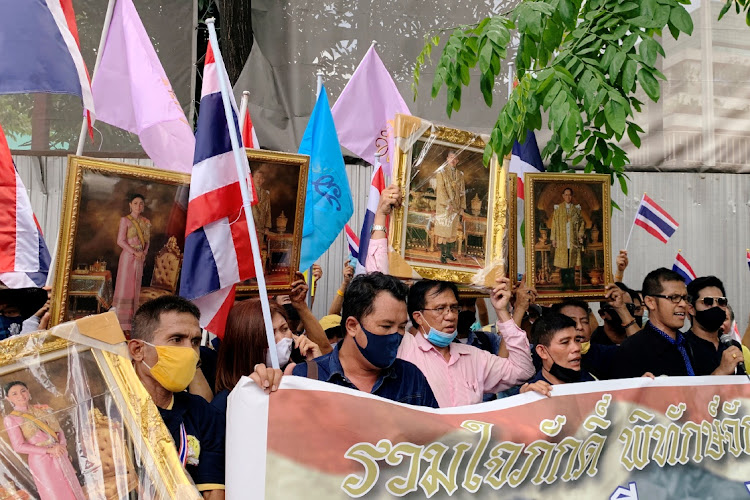 A group of Thai royalists outside parliament to demand the government take action to safeguard the monarchy. in Bangkok, Thailand, on August 10 2020. Picture: REUTERS/PANU WONGCHA-UM

Bangkok/Singapore — Facebook said it’s preparing to legally challenge the Thai government’s request to block access to a private group critical of the monarchy.

Thailand’s government blocked the “royalist marketplace” group — a page with more than 1-million members that discusses the country’s royal family — as the administration continues its crackdown on the growing protest movement calling for greater democracy and less power for the monarchy.

The social media giant said it is legally compelled to comply with the demand to block the group after the government threatened to pursue criminal proceedings against Facebook Thailand, but added that it is “preparing to legally challenge this request”.

Such requests are “severe, contravene international human rights law, and have a chilling effects on the people’s ability to express themselves”, a Facebook spokesperson said in a statement on Tuesday. Excessive government actions undermine the US company’s “ability to reliably invest in Thailand”, including maintaining its office and safeguarding its employees, the spokesperson added.

The move follows the arrest of protest leaders and demonstrators, including two rappers from separate anti-military music acts, who are facing charges that include sedition, which carries a maximum jail sentence of seven years.

“What we have done to these pages is based entirely on Thai law — it’s not dictatorship power as I no longer have it,” Prime Minister Prayuth Chan-Ocha said on Tuesday of the government’s move. “If they want to take legal action, we will fight based on Thai law.”

Members of the groups and protesters at recent anti-government demonstrations are breaking deeply entrenched taboos in Thailand, where openly criticising the monarchy can lead to long prison sentences. Under the country’s tough lese-majesty laws, which make it illegal to defame, insult or threaten the king, queen, heir apparent or regent, offenders can get as many as 15 years in jail for sharing a story on Facebook or hitting “like” on a post.

“Thailand’s government is again abusing its over-broad and rights-abusing laws to force Facebook to restrict content that is protected by the human right to free speech,” said John Sifton, Asia advocacy director at Human Rights Watch.

The access within Thailand to the group’s page showed a message: “This content isn’t available right now.” The group can still be accessed outside Thailand, though only members of the group can view the content.

The page, created in April by self-exiled academic and monarchy critic Pavin Chachavalpongpun, is highly active, with more than 10,000 posts within the past month and more than 10,000 new members over the past week.

Hours after Bangkok shut down the Facebook page, a new one from the same group sprang up and garnered more than 500,000 members.

The second quarter figure is double that of the first quarter, with the company saying it now finds and eliminates about 95% of such violations
Companies
11 months ago

Having done their homework, US lawmakers have finally hauled the tech giants in for a grilling on their anticompetitive behaviour
Features
11 months ago
Next Article