The two weeks of protests are linked to eight deaths, food and medicine shortages and slashed oil output 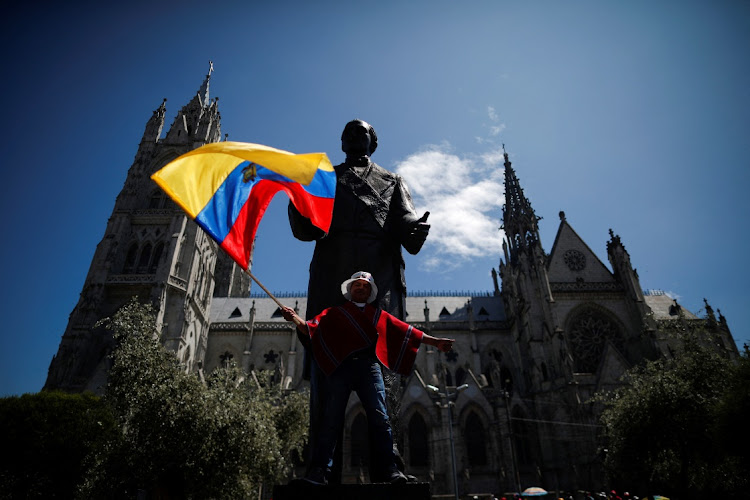 An Indigenous man waves a flag of Ecuador during an anti-government protest in Quito, Ecuador, on June 28 2022. Picture: REUTERS/ADRIANO MACHADO

Quinto — Ecuadorean President Guillermo Lasso survived an attempt by opposition lawmakers to oust him on Tuesday after he insisted his government will not negotiate further with an indigenous leader to end more than two weeks of protests.

The protests have been linked to eight deaths and have led to food and medicine shortages and slashed oil output.

“We will not return to dialogue with Leonidas Iza, who only defends his political interests and not those of his base,” Lasso said, referring to the indigenous leader.

“To our indigenous brothers — you deserve more than an opportunist for a leader.”

Largely indigenous demonstrators have been marching to protest against high fuel and food prices since June 13 2022 and at least eight people have died in connection with the marches, including a soldier killed early on Tuesday.

Protesters’ road blockades have led to shortages of food in supermarkets and medical supplies in hospitals.

Only when there are legitimate representatives of all the peoples and ethnicities of Ecuador, will we return to the negotiating table.

Lasso’s adversarial relationship with Ecuador’s national assembly has worsened during the protests, prompting lawmakers from the opposition Union for Hope (UNES) movement, loyal to former leftist President Rafael Correa, to push a vote seeking his removal from office.

The vote was thrown into chaos as some lawmakers complained of technical problems and it had to be repeated three times.

On the third vote late on Tuesday, 80 of Ecuador’s 137 lawmakers voted to remove Lasso as president, shy of the 92 votes needed for the measure to succeed.

Lasso said the government had made significant concessions to the protesters, agreeing to a petrol price cut, debt forgiveness and subsidies for fertilisers, among other demands.

Iza said on Monday the price cut was not enough.

Lasso said his government was open to talks, but not with Iza.

The country could not engage in dialogue with those holding it “hostage”, Lasso added.

He offered condolences to the family of the soldier who was killed when people with guns attacked a convoy of 17 diesel tankers that he was accompanying.

“Only when there are legitimate representatives of all the peoples and ethnicities of Ecuador, who seek real solutions and who are open to a real and frank dialogue, will we return to the negotiating table,” Lasso said.

Iza, responding to Lasso, said he would remain at the venue of the talks until government representatives came.

“Mr President, we have never conditioned who can come to dialogue and who cannot,” he said.

“In this moment what seems important to me is an attitude of peace, of dialogue, no more warlike attitudes,” added Iza, who heads the Confederation of Indigenous Nationalities of Ecuador (CONAIE).

Mediators at the talks said the two sides had been close to a deal.

Ecuador’s oil production has fallen by 1.8-million barrels during the protests, the energy ministry said on Tuesday, as blockades prevented the transport of supplies to oil blocks.

State-run oil company Petroecuador has registered a reduction of 1.47-million barrels, while private producers have lost more than 385,000 barrels, the ministry said in a statement.

“In 15 days, the state has stopped receiving $166.4m in the oil sector. Up to now 1,199 wells have been shut, 85% belonging to Petroecuador,” the ministry said, adding the Trans-Ecuadorean System Oil (SOTE) Pipeline was halted again on Monday, because of low crude volumes and the private OCP (Crudos Pesados Oil) pipeline was pumping at 20% of its capacity, some 92,000 barrels.

The ITT field — Ecuador’s largest — was operating normally and produced more than 52,000 barrels on Monday, according to Petroecuador.

A company source who asked not to be identified said Petroecuador was looking at whether it would need to delay exports, but production would likely not have to stop for several more days.

Chile’s Codelco agreed to a request by Ecuador’s Enami to suspend two arbitration processes over the Llurimagua copper-molybdenum exploration project ...
News
2 months ago