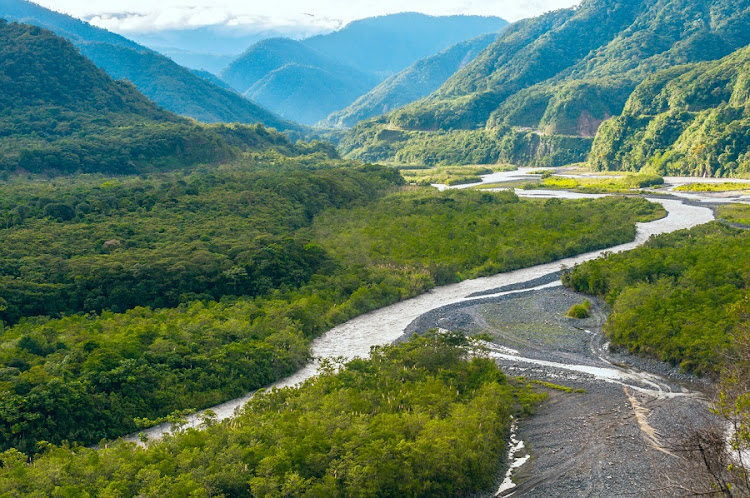 Maikiuants — The brightly coloured chiva bus rocked back and forth, branches scraping across its sides, as it travelled down the narrow dirt road traversing mountain ranges of the Cordillera del Condor, in Ecuador’s southern Amazon.

The region, which stretches about 150km along the border with Peru, is famous for its rare species and for its large deposits of gold and copper, which Ecuador and its neighbour fought over for half a century until a 1998 border deal.

Today the area is racked by a different kind of conflict, as the indigenous Shuar people fight to protect their land, forests and rivers from the creeping spread of Ecuador’s mining industry.

Since 2019, the Maikiuants, a community of about 50 Shuar families, have been trying to stave off attempts by Canadian mining company Solaris Resources to set up a copper mine just 7km away in Warints, another Shuar community.

The firm has already built a base camp and started exploration activities.

“These industries are the very same ones that are destroying the world with their activities,” said Josefina Tunki, who has become a prominent voice against mining extraction as president of the Shuar Arutam People (PSHA).

Her organisation represents about 10,000 indigenous Shuar in the region, including the community of Maikiuants.

While many in Warints support the mining project for the jobs it will create, the Maikiuants and other Shuar communities are adamantly against it.

“Here we have waterfalls, rivers, medicine. Here we have meat. For us [mining] isn’t development. For us, the forest is life, it is the market,” Tunki told the Thomson Reuters Foundation.

Industry experts say there is a growing need for sustainable mining to feed surging demand for minerals such as nickel, cobalt, lithium and copper that are used to make electric vehicles, solar panels, wind turbine systems and batteries as the world tries to move to renewable energy to slow global warming.

“The energy transition is not possible if we don’t [also] talk about how we are going to significantly increase the level of mining activity to produce the metal required for that transition,” said Nathan Monash, head of Ecuador’s Chamber of Mining.

But as global hunger for minerals eats into the Amazon, mining projects are swallowing the land of indigenous communities that climate groups say are the best custodians of the world’s largest rainforest, whose protection is considered essential to slowing climate change.

In most cases, the communities were not consulted before their territory was sold for extraction purposes, something that companies and the government are required to do under both Ecuador’s constitution and international law, he said.

Tunki said Solaris did get the approval of the Warints community before starting its project, but neither the company nor the Ecuadorean government consulted the other local communities or the PSHA.

Solaris states on its website that it “always places the highest importance in creating and maintaining open, respectful, proactive and productive relations” with all the communities where it operates.

After initially agreeing to an interview, the company did not respond to several follow-up emails.

Ecuador’s government is eager to build up the country’s mining sector and reduce its financial dependency on crude oil exports. It has estimated mining could generate $40bn in export earnings over the next decade.

In August 2021, Ecuador President Guillermo Lasso passed a decree outlining a new mining policy. It promises to crack down on illegal mining and make buying concessions easier for foreign investors, all while emphasising that mining activities in the country need to be sustainable and responsible.

But his plans have sparked a backlash from environmental activists and indigenous communities who say the industry is already doing irreversible social and environmental damage.

According to Global Forest Watch, the two Amazonian provinces of Morona Santiago and Zamora Chinchipe that encompass the Cordillera del Condor have together lost more than 44,000ha of forest over the past 20 years.

Jorge Brito, a biologist with Ecuador’s National Institute of Biodiversity, said the vast majority of that tree loss has been due to legal and illegal mining, as well as illegal logging.

“The first thing [mining companies] do is open roads to have better access. That’s when the impacts start,” he said, calling the results “brutal”.

Monash at the Chamber of Mining pointed to the country’s first two large-scale mines in Zamora Chinchipe, saying they have already cut poverty levels and doubled average incomes in some parts of the province — assertions the Thomson Reuters Foundation could not confirm.

But some local people say those mines stand as examples of the devastation the industry can cause.

Since development began in the mid-2000s on the sprawling Mirador copper, gold and silver mine, owned by the Ecuadorean-Chinese company Ecuacorriente, human rights groups have denounced the project for forcibly evicting more than 30 Shuar families from the community of San Marcos.

Carlos Cajamarca, a Shuar farmer who lives in YanuaKim, about a kilometre upriver from the mine, said his four adult children were evicted from San Marcos by the military in 2014.

The mine has also contaminated the area’s water supply, he said.

People who bathe in the local river emerge with rashes and lesions on their skin, he said, and his small crops of yucca, plantain and other fruits don’t produce as much as they did before the mine opened.

“The contamination is everywhere, in plants, people and animals,” he said.

Neither Ecuacorriente nor Ecuador’s ministry of energy & mines responded to several interview requests.

Indigenous communities around Ecuador have been pushing back against the spread of mining, with protests, lawsuits and efforts to develop economic alternatives such as stepped-up tourism.

They have managed to halt several large mining projects over the past five years, and in January the Constitutional Court ruled that mining operations need to seek consent from all indigenous communities affected by their projects, not just a select few.

Last year, the Maikiuants bolstered their guard force, an unarmed self-defence group, to stop mining personnel using the road through their community, the only way to get to the facilities in Warints.

Now helicopters fly over the area several times a day, bringing people and supplies from the city of Macas to the mining camp by air.

Maikiuants resident Victoria Tseremp said the fight is vital to save her community and the nature around it from Ecuador’s land-hungry mining growth.

For her, the promise of jobs and money is not enough to justify the destruction of nature that comes when a mine moves in.

“We have everything we need to eat,” Tseremp said from her kitchen, as she peeled plantains picked from a chakra, or community plot. “I don’t need money to eat here.”

By the numbers | World’s changing forests over 30 years