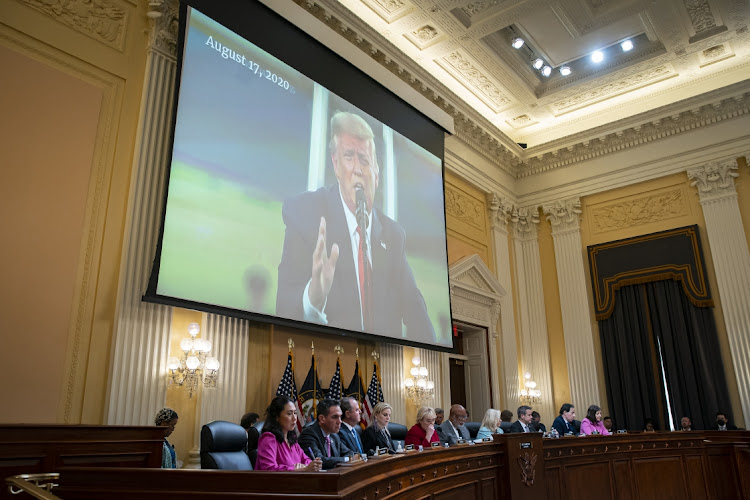 Former US president Donald Trump is displayed on a screen during a hearing of the select committee to investigate the January 6 attack on the US Capitol, in Washington, DC, the US, June 13 2022. Picture: AL DRAGO/BLOOMBERG

Washington  — Top advisers to former US president Donald Trump told him that his claims of widespread election fraud were unfounded and would not reverse his election loss, but he refused to listen, according to testimony on Monday at a hearing of the committee investigating the January 6 2021, riot at the US Capitol.

Officials working on Trump’s campaign and in his administration said they told Trump that they found no merit in a wide range of allegations that surfaced after his November election defeat, including reports of a “suspicious suitcase” containing fake ballots, a truck transporting ballots to Pennsylvania, computer chips swapped into voting machines and rampant fraudulent voting in Arizona.

“I thought, boy, if he really believes this stuff he has lost contact with, he’s become detached from reality,” said William Barr, who served as Trump’s attorney-general and was long known as loyal to the Republican president. In video testimony, Barr bluntly dismissed claims of fraud as “bullshit” and “crazy stuff”.

“There was never an indication of interest in what the actual facts were,” he said.

The Democratic-led House of Representatives select committee investigating the assault on the US Capitol by thousands of Trump supporters presented its findings at a second public hearing this month on its nearly year-long investigation into the riot.

Monday’s hearing sought to make the case that Trump ignored the advice of many of his own staffers when he claimed that the 2020 presidential election was “stolen” from him and encouraged his supporters to march on the Capitol.

“He and his closest advisers knew those claims were false, but they continued to peddle them anyway, right up until the moments before a mob of Trump supporters attacked the Capitol,” Democratic representative Zoe Lofgren said.

Trump has denied wrongdoing, and repeatedly insisted that he did not lose, dismissing the select committee investigation as a political witch-hunt.

Opinion polls show that many of Trump’s supporters still believe his false claims about the election. Some are now running for offices in which they would oversee future elections. Trump has hinted at running for president again in 2024 but has not announced any decision.

Bill Stepien, Trump’s campaign manager, said he recommended on election night that Trump steer clear of any pronouncement of victory and instead say votes were still being counted. But Trump went on television to preemptively declare victory.

Matthew Morgan, chief lawyer for Trump’s campaign, said in video testimony that any claims of fraud would not change the outcome of the election.

Byung J Pak, who resigned as US attorney in Atlanta as Trump’s camp questioned Georgia’s election results, said he found no evidence of fraud in that state.

Referring to the suspicious suitcase that supposedly contained fake or altered ballots, Pak said, sitting at the witness table: “The alleged black suitcase being pulled from under the table was an official lockbox.”

Al Schmidt, the only Republican on Philadelphia’s elections board who became a target of attacks after he defended the integrity of the 2020 vote, also appeared and dismissed allegations about his state.

“Not only was there not evidence of 8,000 dead voters voting in Pennsylvania — there wasn’t evidence of eight,” he said.

Georgia and Pennsylvania were among states that backed Trump in the 2016 election, but went for Biden in 2020. They have been a focus of the unfounded assertions of election fraud.

Ben Ginsberg, a prominent Republican election lawyer, said he had looked into practices in 180 counties and found no instance of credible election fraud. “The Trump campaign did not make its case,” he said.

Four people died the day of the attack, one fatally shot by police and the others of natural causes. About 140 police officers were injured, and one died the next day. Four officers later died by suicide.

Nearly 850 people have been arrested for crimes related to the riot, including more than 250 charged with assaulting or impeding law enforcement.

Once thronged by 2.5-million visitors a year, Capitol hallways echo with emptiness
World
5 months ago
Next Article