Deaths are up by about 40% but are unlikely to be caused by the Omicron variant, says CDC director 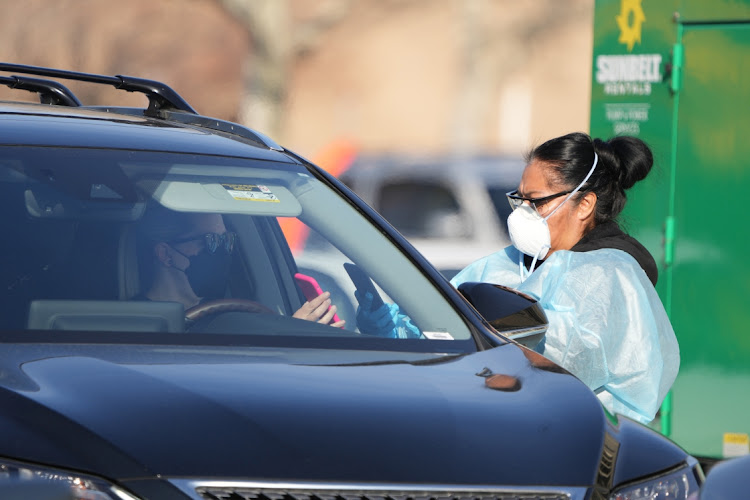 A healthcare worker checks in a resident arriving to receive a Covid-19 test in Salt Lake City, Utah, the US, January 11 2022. Picture: GEORGE FREY/BLOOMBERG

Washington — Covid-19 hospitalisations in the US have increased by about 33% and deaths are up by about 40% from a week earlier, the head of the US Centers for Disease Control and Prevention (CDC) said on Wednesday.

“The magnitude of this increase is largely related to the Omicron variant, which now represents about 90% of the Covid-19 cases in the country,” she said.

Hospitalisations have been on the rise since late December as Omicron surpassed the Delta variant as the dominant version of the coronavirus in the US, though experts say Omicron will likely prove less deadly than prior iterations.

The recent increase in Covid-19 deaths is probably a lagging effect of the Delta variant, which was surging before Omicron took hold in the US in December, Walensky said.

With Delta and other prior variants, deaths have lagged behind infection rates by a few weeks.

“We may see deaths from Omicron but I suspect that the deaths that we’re seeing now are still from Delta,” Walensky said, adding that it will take time to understand how Omicron affects coronavirus death totals.

She said guidance on mask-wearing was unlikely to change.

The US  reported 1.35-million new coronavirus infections on Monday, shattering the global record for daily cases in any one country. Last week, hospitalisations of Covid-19 patients were up by 45% and stood at more than 111,000, a figure not seen since January 2021.

“Omicron, with its extraordinary, unprecedented degree of efficiency of transmissibility, will ultimately find just about everybody,” Dr Anthony Fauci said on Tuesday. “Some, maybe a lot of them, will get infected but will very likely, with some exceptions, do reasonably well in the sense of not having hospitalisation and death.”

The wave of infections has disrupted plans for students and teachers to return to school and for workers to go back to the office.

Critics have accused President Joe Biden of not focusing enough on testing in the fight to control surging Omicron cases and hospitalisations, amid growing reports of acute shortages of test kits around the country.

Other steps announced on Wednesday include CDC and states working together to meet demand for additional tests for school districts. The first such deliveries will be made later in January, the administration said.

The administration said it had so far distributed $10bn in resources to states for testing at schools, funding that was included in the coronavirus legislation signed into law in 2021. The White House said those efforts had resulted in 96% of schools being able to open in-person classes this month, up from 46% of schools in January 2021.

‘The market isn’t moving on Omicron but on earnings, Fed and economic data,’ one analyst says
Markets
2 weeks ago