Networks across Spain, Britain, Italy and beyond have found themselves in increasingly desperate circumstances 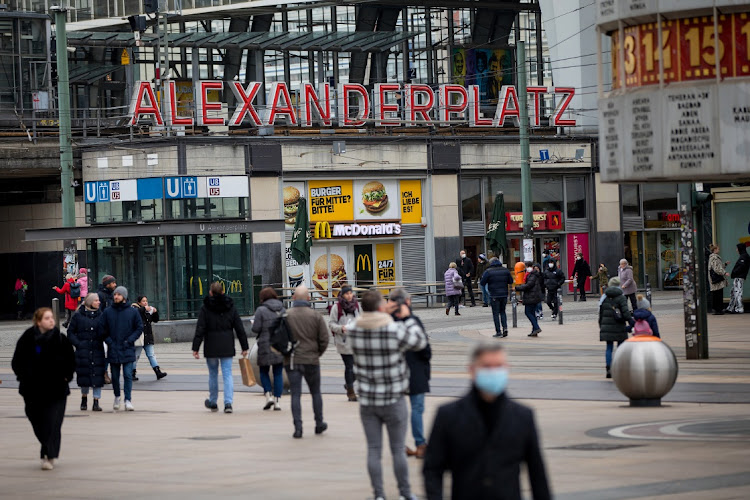 Germany has tightened restrictions on access to restaurants and cafes and vowed to accelerate vaccinations in an effort to keep the rapidly spreading omicron strain of the coronavirus in check. Picture: Krisztian Bocsi/Bloomberg

Madrid/London — Europe's healthcare systems are being strained once again by the rapid spread of the Omicron variant of the coronavirus over the holiday period, with large numbers of key staff ill or self-isolating and experts predicting the peak of infections is yet to come.

Despite early studies showing a lower risk of severe disease or hospitalisation from Omicron compared with the previously dominant Delta variant, healthcare networks across Spain, Britain, Italy and beyond have found themselves in increasingly desperate circumstances.

In the US, hospitals are postponing elective surgeries to free up staff and beds, while Spain's primary healthcare network is so strained that on the penultimate day of 2021 authorities in the northeastern region of Aragon authorised the reincorporation of retired medical workers and nurses.

“The exponential increase in cases means primary care can perform neither their contact tracing and vaccination campaign duties adequately, nor their ordinary activities,” the authorities said in a statement.

Frontline workers such as nurses and physiotherapists are the hardest hit, Spanish nursing union Satse said, citing the example of Andalusia where they accounted for more than 30% of staff on Covid-19-related leave in the second half of December.

The sunny southern region, where Britons and Germans have settled in droves, registered about 1,000 workers infected with the coronavirus in the final weeks of the year, “generating grave issues in service coverage”, the statement reads.

In the worst cases, one in four tested positive in the run-up to Christmas, as in Amsterdam's University Medical Centre where 25% of staff are now testing positive, compared with 5% a week ago.

Dutch hospitals are mulling changing their quarantine rules so infected staff who do not have symptoms can come to work, De Telegraaf said, as Dutch daily case numbers break records despite a strict lockdown since December 19.

In Italy, the problem of infected health workers — more than 12,800 according to data gathered last week — is being compounded by the suspension of doctors, nurses, and administrative staff who are not vaccinated and represent just more than 4% of the total workforce.

In a last-ditch bid to plug gaps in the service, Italian health agencies are freezing staff holidays, deferring them to other periods, and freezing or postponing scheduled non-urgent surgeries.

With hospitalisations already at their highest since last February, the NHS is likely to be stretched even thinner as Covid-19 surges among older people, UK health minister Sajid Javid said on Friday.

“We are still seeing rising hospitalisations, particularly with the case rate rising in older age groups. That is of concern,” Javid said in a broadcast clip. “I think we have to be honest … when we look at the NHS, it will be a rocky few weeks ahead.”

An average of about 80,000 medical staff were absent from work every day in the week to January 2 — the most recent period for which data is available — a 13% rise on the previous week, according to NHS England. Almost half of those absences, or 44%, were due to Covid-19, a rise of more than fifth from the week earlier.

Rafael Bengoa, co-founder of Bilbao's Institute for Health and Strategy and a former senior WHO official, said Spain has failed to take sufficient measures to reinforce vital services and pressure will continue to ratchet up for several weeks.

“Spain has several weeks — basically all of January — of rising cases… then hopefully we'll hit a plateau that goes down just as fast,” he said.

He considers it unlikely that a more infectious variant which is also more deadly than Omicron will appear and is optimistic the current wave might signal the beginning of the pandemic's end.

“Pandemics don't end with a huge boom but with small waves because so many have been infected or vaccinated… After Omicron we shouldn't have to be concerned with anything more than small waves.”

Governments in many countries are scaling back festivities in an effort to contain rampant contagion as global coronavirus infections hit a record ...
World
7 months ago
Next Article