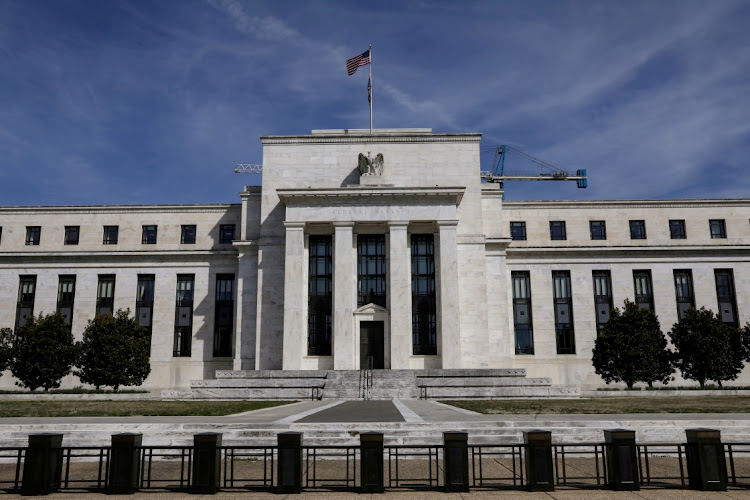 The Federal Reserve Board building on Constitution Avenue in Washington, the US. Picture: REUTERS/BRENDAN MCDERMID

Washington  — The Federal Reserve on Wednesday cleared the way to reduce its monthly bond purchases “soon” and signalled interest rate increases may follow more quickly than expected, with nine of 18 US central bank policymakers projecting borrowing costs will need to rise in 2022.

The actions, which were included in the Fed’s latest policy statement and separate economic projections, represent a hawkish tilt by a central bank that sees inflation running this year at 4.2%, more than double its target rate, and is positioning itself to act against it.

The current target interest rate was held steady in a range of 0% to 0.25%.

Though acknowledging the new surge of the pandemic had slowed the recovery of some parts of the economy, overall indicators “have continued to strengthen”, the Fed said in a unanimous statement.

If that progress continues “broadly as expected, the committee [federal open market committee] judges that a moderation in the pace of asset purchases may soon be warranted”, the Fed said.

“Will maintain accommodative policy until inflation runs moderately above 2% for some time, so that inflation averages 2% over time and longer-term inflation expectations remain well-anchored at 2%.”

Fed chair Jerome Powell expanded on that statement during his post-meeting press conference, telling reporters: “While no decisions were made, participants generally view that so long as the recovery remains on track a gradual tapering process that concludes around the middle of next year is likely to be appropriate.”

The statement had been widely expected to signal that the Fed would soon begin winding down the $120bn in monthly bond purchases it has been making to blunt the economic impact of the coronavirus pandemic.

But it was in their broader economic outlook that Fed policymakers made a less anticipated change.

The outlook for inflation jumped 0.8 percentage point for 2021 to 4.2% and the unemployment rate seen at the end of this year rose. In turn, two officials brought forward into 2022 their projected timeline for slightly lifting the Fed’s benchmark overnight interest rate from the current near-zero level, enough to lift the median projection to 0.3% for 2022.

However, anticipation that the US Fed may move a step closer to tapering later on Wednesday has kept a lid on gains and the mood
Markets
1 month ago