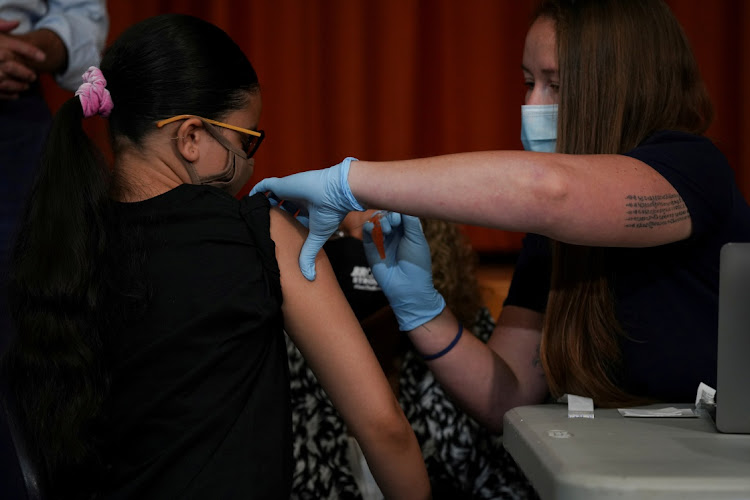 A Bronx resident receives a Pfizer shot, in New York, the US. Picture: REUTERS/DAVID DEE DELGADO

US President Joe Biden will order all executive branch employees and federal contractors to be vaccinated against Covid-19, and direct his administration to issue new rules forcing large private employers to require shots or testing.

The moves, to be outlined by Biden later on Thursday, stretch the administration’s authorities to new lengths as it seeks to quell the resurgent Covid-19 pandemic.

Biden will sign an  executive order mandating the vaccines at the White House, according to a person familiar with the matter. The president will also detail additional steps to increase vaccinations, keep schools open, expand testing and begin booster shots for all Americans.

Biden will ask the labour department to issue a rule for any employer with more than 100 employees to have a vaccine requirement or a testing alternative, NBC News reported. The White House didn’t provide details.

The directives mark a significant hardening of the administration’s position on vaccine mandates amid the surge in the Delta variant that threatens to overwhelm hospitals in parts of the US. The federal workforce mandate could face pushback from outside groups, including labour unions, who represent some of the 4 million executive branch workers.

Biden’s new order goes further than requirements he announced on July 29. Then, the president said federal workers and on-site contractors would either need to prove they’d been vaccinated or wear masks and submit to frequent coronavirus testing. Now, Biden is mandating vaccines, and appears to be extending the requirement to federal contractors who don’t work at government facilities.

There will be “limited exceptions” to Biden’s new mandate, including for religious objections or for those with disabilities, White House press secretary Jen Psaki said Thursday. Employees who refuse will “face progressive disciplinary action” that could include dismissal, she said.

Psaki said it would take effect when Biden signs it, with a “ramp up” period of about 75 days.

The administration hasn’t yet released all of the details of the plan.

“The expectation is that if you want to work in the federal government or be a contractor, you need to be vaccinated, unless you are eligible for one of the exemptions,” she said.

Everett Kelley, president of the American Federation of Government Employees, the largest union for federal workers, voiced support for vaccines but also indicated that the new order should be negotiated with the labour groups.

“Workers deserve a voice in their working conditions,” Kelley said in a statement. “We expect to bargain over this change before implementation, and we urge everyone who is able to get vaccinated as soon as they can do so.”

The Department of Defense, the Department of Veterans Affairs, the Indian Health Service, and the National Institutes of Health are all implementing previously announced vaccination requirements that cover 2.5-million workers, according to the person, who discussed the order ahead of the announcement on condition of anonymity.

While the White House doesn’t have the power to require vaccinations nationally, it has pointed to an emerging patchwork of employer vaccine requirements as a key factor driving a new wave of inoculations.

Biden focused the early months of his presidency on taming the pandemic, though it has surged again as the Delta variant spread, the vaccination campaign slowed and as restrictions and mask mandates lifted.

The US recorded 176,000 new cases on Wednesday, far above the roughly 10,000 a day seen in June when the pandemic was at its lowest, data compiled by Bloomberg show. Another 2,143 people in the US died from the virus on Wednesday.

A range of factors are now driving vaccinations, including the Delta outbreak and more widespread employer mandates, which spiked after the Food and Drug Administration issued full approval for the Pfizer-BioNTech shot in August. The White House said this week that more three-quarters of US adults have now received at least one dose of a Covid-19 vaccine.

But the US response to the pandemic remains a patchwork and a political battleground, with some prominent Republican governors downplaying the importance of vaccines and blocking public health measures such as mask mandates.

As Biden presses to get shots into arms of the unvaccinated, the administration is also preparing to start a booster programme for those who’ve already been inoculated. The administration plans to authorise third doses of Pfizer’s shot beginning September 20 for anyone who had their second dose at least eight months previously.

Sanlam mandates vaccinations but will not fire workers who refuse jab

Many sportspersons are not taking the vaccine, falling prey to wild conspiracy theories
Sport
8 months ago

How Denmark weathered the Covid storm — sex and all

BENEDICT ORAMAH: Independence, not isolation, needed for Africa to overcome ...

BENEDICT ORAMAH: Independence, not isolation, needed for Africa to overcome ...