Some young people in the country think they simply aren’t at risk, they’re also way down the queue for vaccination, and they have to work 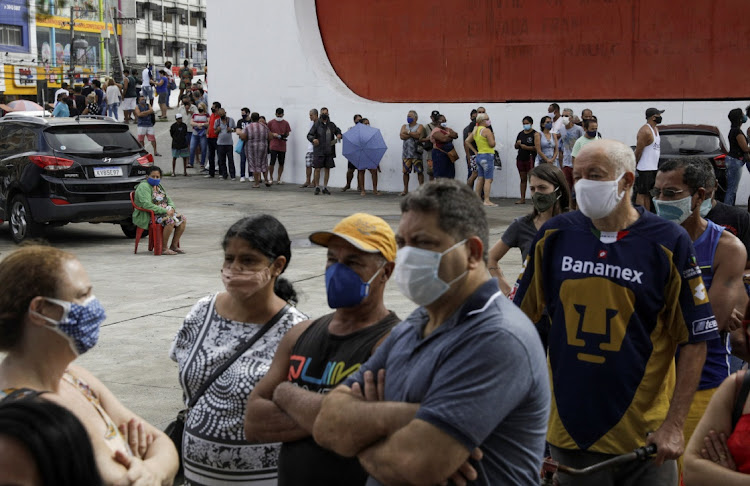 Citizens wait for the AstraZeneca Covid-19 vaccine during a vaccination day for citizens 57 and older in Duque de Caxias near Rio de Janeiro, Brazil, on April 21 2021. Picture: REUTERS/RICARDO MORAES

Rio de Janeiro/Brasília — Rodolpho Sousa, a 28-year-old Brazilian lawyer, had been working from home near Rio de Janeiro when, in late February, one of his clients was jailed. Covid-19 was hitting the prison and he was worried about her, less about himself. He went there to get her out.

His cough started a few days later and wouldn’t quit. He went to an emergency clinic where, his lungs down to half their capacity, he was diagnosed with Covid-19. In the two days he waited for a hospital transfer, he was witness to an infernal scene — patients his age dying on either side of him.

“There was a woman who was 23 next to me and we spoke,” he said. “She started coughing and coughing, and the doctors closed the curtain between us. Later they took her out in a black body bag. I was completely terrified.”

As in most countries, the pandemic in Brazil hit the elderly and immuno-compromised first and hardest. But in the past couple of months, the nation that has stood out as nearly a worst-case scenario for caseloads, deaths and public policy, has shown where the global plague may be headed: for the young.

There are many causes for the alarming shift but one appears to be that the young have trouble accepting they are at risk.

“Because they’re young and the virus first infected the elderly population, they don’t believe or don’t want to believe that it can be serious,” said Dr Suzana Morais, a cardiologist in Rio de Janeiro. “I’ve seen many young patients who are surprised. Others are aware but take risks.”

It’s also true that after months of government aid and staying home, the money is running out and people have to work again, exposing them to risk in a society that hasn’t done well at imposing masks and social-distancing.

After Sousa recovered, his mother got Covid-19 bad and survived at home. His father, 63, a marathon runner, was hospitalised. He died last week.

People are totally tired ... What we want are vaccines, but since that’s not possible we’re trying have something of normal life

Meanwhile, across the country in Brasília, Andréia Santana became a widow. The 29-year-old works as a maid and was not excused despite her boss showing Covid-19 symptoms after a trip to the beach in early March.

“I needed the job,” she said. Her husband had been unemployed for two years and was taking care of their three children. He got government aid in 2020 but not this year. All five were infected, her husband the worst. He went to the hospital. It was crowded, as was the other hospital to which he needed to be transferred. It took a week, and he died there a day later. He was 42.

In Loco, a platform specialised in monitoring social-distancing in Brazil, says that, in most states, the social isolation rate hovered around 40% in March, higher than at the beginning of February but still well below the 70% officials say is needed to slow transmission. Another issue is the Brazilian variant of the virus that appears to be more contagious.

Numbers have started to stabilise but Brazilians act as if the virus were gone. During a virtual meeting of executives from Brazil’s biggest soccer teams, the head of the Soccer Confederation said nobody wants to stop the matches and championships. Days earlier, one of his main players was among 200 arrested in a clandestine casino where the buy-in for a poker game was 40,000 reais ($7,200).

Lago Paranoá, a lake in the centre of Brasilia, is seeing crowds filter again onto boats for weekend parties — their masks around their necks.

Rio de Janeiro lifted most bans earlier this month, when it saw a drop in patients, reopening non-essential business and allowing for dining in bars and restaurants. Sitting on the beach is prohibited, but the Saturday after restrictions were lifted, hundreds had fanned out across the sand in Ipanema, taking in the rays. They kicked around soccer balls and vendors hawked beers as authorities zipped by on four-wheelers leaving everyone undisturbed.

“People are totally tired,” said Pedro Melo, a 27-year-old lawyer who, with his girlfriend, was among the beach goers. The couple got infected in October but only had mild symptoms, like most of their social circle, and were willing to go out again. The night prior, they went for cocktails in Copacabana.

“What we want are vaccines, but since that’s not possible we’re trying have something of normal life,” he said.

Further down the beach, Lucas Alcantara, 31, a communications co-ordinator, sipped beer under an umbrella with a friend. “This is my contradiction,” he said. “I understand the risks, and share the concerns, but I need to find some relief.”

Elen Geraldes, a sociologist at the University of Brasília, says a big problem is the lack of guidance from the top, a mishmash of policies that vary from state to state and city to city with little enforcement. President Jair Bolsonaro often minimises the seriousness of the disease, saying the economic toll will be far worse than that of the virus. Last weekend, as he’s done throughout, Bolsonaro gathered a crowd of supporters, shaking hands and kissing babies.

Cases have stopped rising. Deaths, which still routinely top 3,000 a day, will take longer to stabilise, according to health experts. Vaccinations have picked up, though they remain below the daily rate pledged by the government of 1-million a day.

“We don’t have a unified message from the government about the real need for social distancing,” said Morais, the Rio cardiologist. “In the end, young people don’t respect this much. You have an economically active population that needs to work and they simply don’t have many options.”

New Delhi’s largest hospital operator rushed to court on Wednesday night to seek critical oxygen supply, causing the judge to lash out at the Modi’s ...
World
8 months ago
Next Article