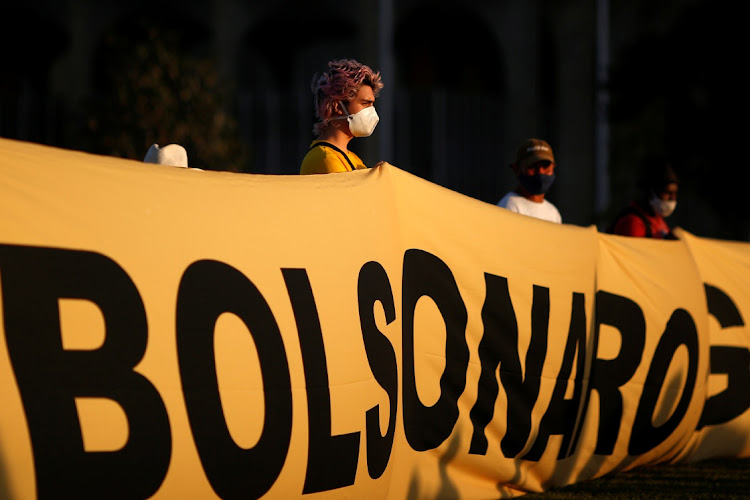 Demonstrators hold a banner that reads "Bolsonaro genocidal" during a protest against Brazil's President Jair Bolsonaro in Brasilia, Brazil, on April 16, 2021. REUTERS/ADRIANO MACHADO

Already suffering from the world’s worst surge in coronavirus deaths, Brazil is now verging on political meltdown. Since late March six members of President Jair Bolsonaro’s cabinet and the heads of all three armed services have left office, raising fears that Bolsonaro, facing re-election in 2022, will exploit the crisis to tighten his grip on power.

The possible unravelling of South America’s most populous country and the world’s fourth biggest democracy puts the onus on Bolsonaro’s opponents to offer Brazilians a credible alternative to populism.

Bolsonaro’s cabinet shake-up is a sign of his political vulnerability. His approval ratings have plummeted due to his handling of the pandemic, which has killed more people than in any country apart from the US. Mounting public debt forced the government to scale back its latest stimulus package, reducing direct payments to poor Brazilians and denting the president’s popularity even more.

Unease persists about the president’s attempts to impose more control over Brazil’s military. Most alarming was the removal of defence minister Fernando Azevedo e Silva, a general who had vowed to keep the military out of politics — no small thing in a country ruled by a military dictatorship from 1964 to 1985. The possibility that Bolsonaro might try to use the armed forces to intimidate his opponents caused the chiefs of the country’s army, navy and air force to resign.

Leaders of Brazil’s private sector have tolerated Bolsonaro’s mercurial governance up to now in exchange for market-orientated economic policies. They should speak out against further concentration of presidential power. The courts should ensure that Bolsonaro abide by the constitution, and block interference into investigations of alleged corruption by his associates and family members.

Above all, centrist forces must develop a compelling alternative to the populist extremes of Bolsonaro on the right and the far-left Workers’ Party of former president Luiz Inácio Lula da Silva, who served more than 18 months in prison on corruption charges of his own.

Political turmoil is to be expected in a country as large and diverse as Brazil, but Bolsonaro’s leadership has worsened its dysfunction, contributed to the spread of the coronavirus, and put economic recovery at home and across the region at risk./New York, April 20

Incoming Petrobras CEO bets on insiders to lead the company

Is it mean population age? Is it a largely urban lifestyle rather than a well-ventilated rural one?
World
5 months ago

Norway has paid $1.2bn into the Amazon Fund so far, but under President Jair Bolsonaro, rainforest destruction has surged
World
5 months ago
Next Article