New Delhi’s largest hospital operator rushed to court on Wednesday night to seek critical oxygen supply, causing the judge to lash out at the Modi’s government 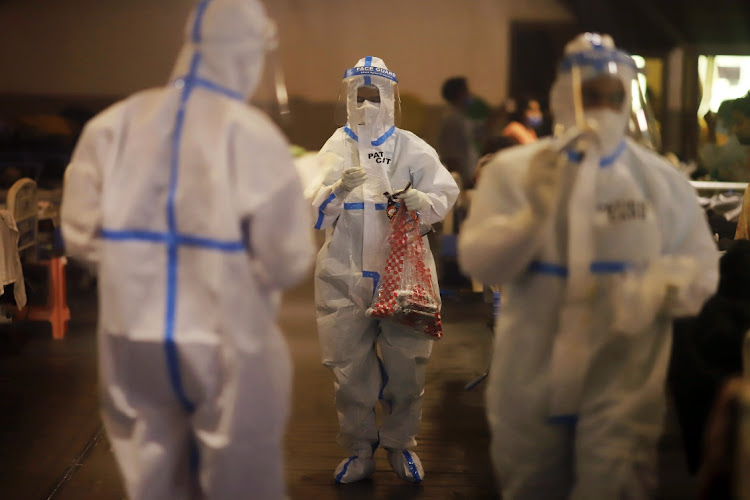 Health workers at a makeshift Covid-19 quarantine facility set up at a banquet hall in New Delhi, India, on April 21 2021. Picture: BLOOMBERG/ANINDITO MUKHERJEE

Mumbai/New Delhi — India posted the world’s biggest one-day jump in coronavirus cases, with infections surging beyond 300,000 on Thursday as the country’s deadlier second wave shows no signs of abating.

The country, which has the second-largest outbreak globally, reported 314,835 new infections, pushing the total to almost 16-million cases. The US, the worst-hit country, saw a peak of 314,312 cases on December 21 and has only reported more than 300,000 infections on two days since the onset of the pandemic. Cases in America are now on a downward trend, helped in part by aggressive vaccinations.

The deteriorating situation in India shows how the pandemic crisis has shifted firmly to the developing world, where variants are threatening containment measures and there are a lack of vaccines after supplies were taken up by richer nations.

Despite being home to the world’s biggest vaccine manufacturer, India has struggled to provide enough shots for its population of 1.3-billion. Lower vigilance around masks and social-distancing has also contributed to the resurgence, with large festivals and elections allowed to take place with few precautions.

This wave is also more lethal for India, which saw fewer fatalities than other developing nations such as Brazil during the first wave, puzzling experts. Covid-related deaths in the country have jumped to 184,657. India has administered more than 132-million vaccine doses, according to data from its health ministry. That’s enough to cover only about 4.8% of its population, according to Bloomberg’s vaccine tracker.

The outbreak threatens to derail the Indian economy that had just begun to recover after a nationwide lockdown in 2020 pushed it into a historic recession. A new virus variant with a double mutation has also been detected locally, and concerns are growing that it’s driving the fierce new wave that is overwhelming India’s hospitals and crematoriums.

“This is just bad planning. Why didn’t we foresee this? This is not rocket science,” Sanghi said during the hearing.

The late-night courtroom drama, with the state and federal government lawyers bickering over oxygen supplies to the national capital, which has among the best healthcare infrastructure in the country, is a grim indicator of a worse situation in the hinterlands. The nation’s social media has turned into a helpline with desperate calls for help to secure medicines, hospital beds, and oxygen cylinders.

The ferocity of the second wave is also resonating with investors and analysts. Indian stocks and the rupee have become Asia’s worst performers this month as sentiment soured, while credit default swaps also surged. On Wednesday, Care Ratings lowered India’s GDP growth forecast for the current fiscal year to 10.2%, from as much as 11.2% in March. This is its second downward revision in less than a month.

Social media posts in India are filled with frantic calls to save lives as the outbreak worsens. Twitter, Facebook, Instagram, WhatsApp and Telegram are all inundated with messages from distraught family members and friends begging for everything from hospital beds to medicines, CT scans, doorstep Covid-19 tests, and even food for the elderly in quarantine.