It's an epidemic and it has to stop, says Biden 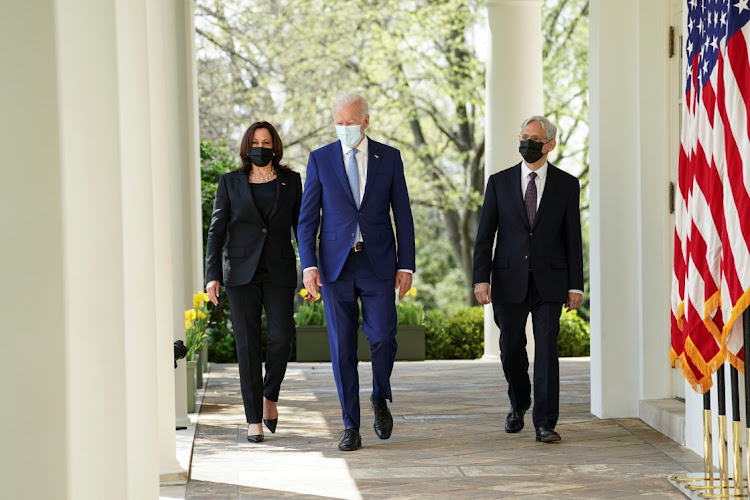 US President Joe Biden, centre, is flanked by Vice-President Kamala Harris and attorney-general Merrick Garland as he arrives to announce new gun control measures, at the White House in Washington, the US, April 8 2021. Picture: REUTERS/KEVIN LAMARQUE

Washington —  US President Joe Biden and attorney-general Merrick Garland announced limited measures to tackle gun violence in the US on Thursday, in what the White House described as a first step to curb mass shootings, community bloodshed and suicides.

The new measures include plans for the justice department to crack down on self-assembled “ghost guns”, and make “stabilising braces” — which effectively turn pistols into rifles — subject to registration under the National Firearms Act.

Biden said he will also ask the Bureau of Alcohol, Tobacco, Firearms and Explosives to release an annual report on firearms trafficking in the US, and make it easier for states to adopt “Red Flag” laws that flag at-risk individuals who own guns.

“Today we're taking steps to confront not just the gun crisis, but what is actually a public health crisis,” Biden said, speaking in the Rose Garden to an audience filled with family members of victims of gun violence. He noted another mass shooting in South Carolina this week.

“This is an epidemic for God's sake and it has to stop,” Biden said.

Biden, a Democrat who has a long history of advocating for gun restrictions, has come under pressure to step up action after recent mass shootings in Colorado and Georgia.

Biden announced the measures alongside Vice-President Kamala Harris and Garland, who Biden said would prioritise gun violence as head of the department of justice.

The measures Biden unveiled do not meet all of his campaign promises and are not legislative. The White House says the president will continue to push for Congress to take more aggressive steps.

Gun control is a divisive issue in the US, which has experienced a significant number of deadly mass shootings at schools and other public venues for decades.

The US constitution's Second Amendment protects the right to bear arms.

Sandy Hook families to take on gunmaker in court

At least five injured in mass shooting at California school

Sandy Hook families to take on gunmaker in court

At least five injured in mass shooting at California school