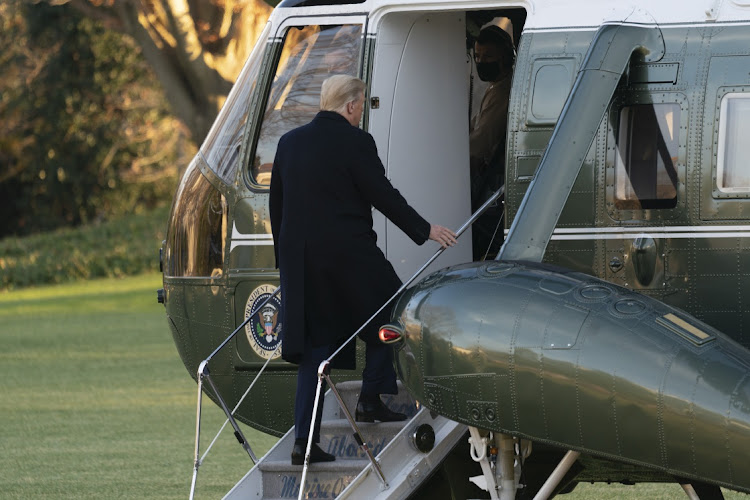 Outgoing US President Donald Trump boards Marine One at the White House in Washington, DC, on December 23 2020. Picture: BLOOMBERG/CHRIS KLEPONIS

Washington — Republicans and Democrats in the US House of Representatives on Thursday blocked attempts to alter a $2.3-trillion coronavirus aid and government spending package, leaving its status in doubt after President Donald Trump demanded extensive changes to the legislation.

Democrats sought to increase direct payments to Americans included in the bill from $600 to $2,000 per person as part of a coronavirus economic relief initiative, acting on one of Trump’s requests. Republicans, who oppose the higher amount, blocked that request.

Republicans then moved to change the amount of foreign aid included in the package, seeking to address another one of Trump’s complaints. Democrats blocked that effort.

The flurry of activity on the House floor did nothing to break a standoff that threatens desperately needed assistance for millions of Americans and raises the prospect of a partial government shutdown at a time when officials are trying to distribute two coronavirus vaccines.

Embittered by his defeat to Democrat Joe Biden in the November election, Trump is pressing Congress to dramatically alter the package, which passed by wide, bipartisan margins on Monday. Biden takes office on January 20.

The 5,500-page bill took months to negotiate and was supported by Trump’s administration.

With the status quo unchanged, it was unclear whether Trump would sign the package into law or hold out for further action.

Without his signature, unemployment benefits for those thrown out of work by the pandemic are due to expire as soon as Saturday, and the US government would be forced into a partial shutdown starting on Tuesday.

President wants $600 stimulus cheque to every American raised to $2,000
World
4 months ago

Bankruptcy, his hotels empty due to Covid-19, possible tax fraud and sexual assault accusations — these are a few of Donald Trump’s fevered fears
Opinion
5 months ago
Next Article