President wants $600 stimulus cheque to every American raised to $2,000 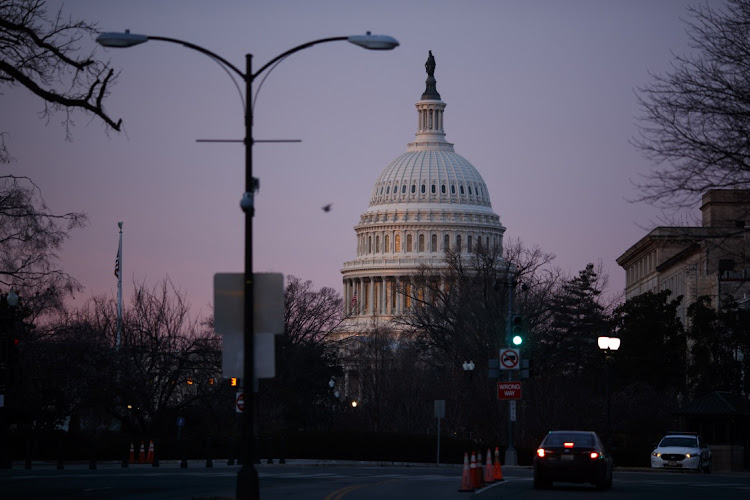 The US Capitol building in Washington, DC. Picture: TING SHEN/BLOOMBERG

Washington — The US on Wednesday faced the prospect of a year-end government shutdown during a raging pandemic after outgoing President Donald Trump threatened not to sign a $2.3-trillion package funding the state for another year.

The package, which includes $892bn specifically responding to the Covid-19 crisis, in which more than 323,000 Americans have died, was the result of months of negotiation between congressional Republicans and Democrats. It also funds government operations to end-September 2021.

Trump, in a video posted to social media on Tuesday evening, surprised some of his closest officials by demanding that the bill be revised to include $2,000 payments to each American, more than triple the $600 that Congress had been discussing publicly for almost a week before passing the bill.

A source familiar with the situation said aides thought they had talked Trump out of the $2,000 demand last week, only to learn he had not given up when he posted the video. That surprised even his treasury secretary, Steven Mnuchin, who took part in the talks and backed the $600 figure.

Current federal funding is due to expire on Monday if Trump, who is scheduled to leave for Florida on Wednesday, does not sign the bill into law.

That would furlough millions of federal workers and shut down wide swathes of the US government at a time when it is rushing to distribute two coronavirus vaccines and contend with a massive hack that officials say was perpetrated by Russia.

Trump’s administration helped to craft the bill, and the White House said on Sunday that he would sign it.

In the video Trump demanded the bill be stripped of foreign aid, which is included in every annual federal spending bill. He also objected to other elements of the 5,500-page bill, such as fish breeding and funding for the Smithsonian museums.

Trump did not say whether he would actually veto the legislation. He will leave office on January 20 when president-elect Joe Biden is sworn in.

He has also set up a parallel fight with Congress that comes to a head on Wednesday, his deadline to decide whether to carry out his treat to veto the $740bn National Defence Authorisation Act. Trump dislikes the bill, which funds the military and has passed uninterrupted every year for decades, because it would strip the names of Confederate generals from military bases and because it does not repeal liability protections — unrelated to defence — for social media companies, such as Twitter and Facebook, that Trump considers unfriendly to conservatives.

Both measures passed with veto-proof majorities, but a veto would put Trump’s fellow Republicans in an awkward position. Many of them opposed the $2,000 payments that Trump is now demanding, and they would have to either defy their party’s leader or change their position on those payments.

Democrats have supported the $2,000 payments sought by Trump, and House speaker Nancy Pelosi said on Tuesday she was ready to vote on the proposal this week. She did not address Trump’s other concerns.

If Trump takes no action, the bill would normally become law after 10 days without his signature under the US constitution. However, that does not apply in this situation because Congress is due to adjourn at the end of the year.

Trump sparked a record 35-day government shutdown two years ago when he rejected a federal spending bill over what he said was insufficient funding for building a US-Mexico border wall.

The US is expected to add about 80 more companies and affiliates to the list, saying some have ties to the military
World
4 months ago

Beg pardon, but Bill Barr quitting does not trump the damage he has done

The chamber is scheduled to vote at 10.30am in the US to limit debate on the giant annual defence-policy bill
World
4 months ago
Next Article