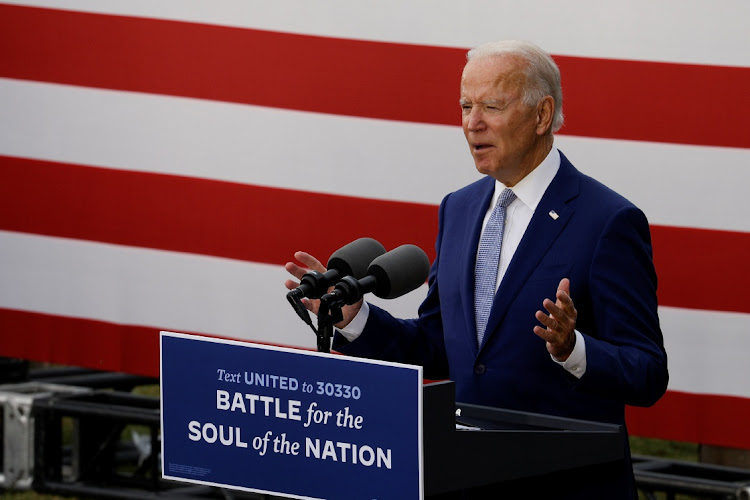 Warm Springs — Democratic presidential nominee Joe Biden evoked the legacy of Franklin D  Roosevelt in a speech near the former president’s Georgia retreat on Tuesday, promising to heal the nation from a set of cascading crises in his closing argument just a week before election day.

Speaking from Warm Springs, Biden used Roosevelt’s efforts to heal his polio from the therapeutic springs as a metaphor for the work that lies ahead.

“This place, Warm Springs, is a reminder that though broken, each of us can be healed,” Biden said. “That as a people and a country, we can overcome this devastating virus. That we can heal a suffering world. And yes, we can restore our soul and save our country.”

The trip to Georgia, which a Democratic presidential candidate has not carried since 1992, also signified the state’s changing political dynamics. Georgia is fully in play in 2020, and Biden is hoping to flip the state from President Donald Trump. According to FiveThirtyEight’s average of state polls, Biden narrowly leads Trump 48% to 46.8%.

Democrats are also hoping he will help their candidates win two highly competitive Senate seats in the state. Biden will attend a drive-in rally in Atlanta with both of them, Jon Ossoff and Raphael Warnock, later on Tuesday.

In his speech, Biden assailed Trump for surrendering in the fight against coronavirus, vowing to tackle the pandemic with aggressive action while also addressing income inequality, climate change and racial inequities.

Biden has cast the race as a referendum on Trump’s first term and largely about his mismanaged response to the coronavirus, which has killed more than 225,000 Americans amid a new surge of infections rising across the US.

The former vice-president has sought a contrast with Trump on all facets of his approach to the virus, from his personal behaviour to his policies. Biden has held limited in-person campaign events, all of which strictly follow social-distancing guidelines, and has called for a muscular federal response.

Trump has consistently downplayed the virus, despite his own hospitalisation after contracting it earlier this month, and is holding several large campaign rallies a day.

“I’m here to tell you we can and will get control of this virus,” Biden said, as he slammed Trump’s behaviour and rhetoric about the virus. “As president, I will never wave the white flag of surrender.”

In the months since the onset of the pandemic in March, Biden has often raised Roosevelt’s stewardship of the country through the Great Depression, calling for national leadership that improved the country in the aftermath of a crisis.

“I think we all agree, whoever is the next president is going to inherit an economy and circumstance that is as dangerous and consequential as Roosevelt did after the Depression,” Biden said at a fundraiser last month.

In an echo of Roosevelt’s New Deal, Biden has proposed spending heavily to increase testing, distribute protective equipment to schools and business and vaccinate all Americans at no charge.

Biden, a devout Catholic, also referenced Pope Francis, repeating his warning against phoney populism to call for healing and unity.

Former president Barack Obama was also back on the trail in Florida on Tuesday to boost Biden, reports said.

At a drive-in rally in Orlando, Obama attacked Trump's record on the coronavirus and urged Democrats to vote in large numbers to avoid a repeat of the 2016 election when Trump won the battleground state and defeated Hillary Clinton.

“We have to leave no doubt. We can't be complacent,” he said. “We were complacent last time. Folks got a little lazy, folks took things for granted, and look what happened. Not this time, not in this election.”

In another show of confidence in the Biden camp, former New York mayor Michael Bloomberg said on Tuesday he will spend about $15m on television advertising in Texas and Ohio in the coming days, reports said.

ISMAIL LAGARDIEN: Next president of the US will have his hands full restoring its standing

Victory in the election will be a poisoned chalice as the US is in decline, except when it comes to its military power
Opinion
9 months ago

The new, ultra-conservative US Supreme Court justice may also help strike down Obamacare just a week after the US election
World
9 months ago
Next Article

Macron to tighten restrictions as France reports most Covid-19 deaths since ...

Macron to tighten restrictions as France reports most Covid-19 deaths since ...