In the US, over half of children trafficked for sexual exploitation met their abusers for the first time via text, a website or mobile app, Equality Now says 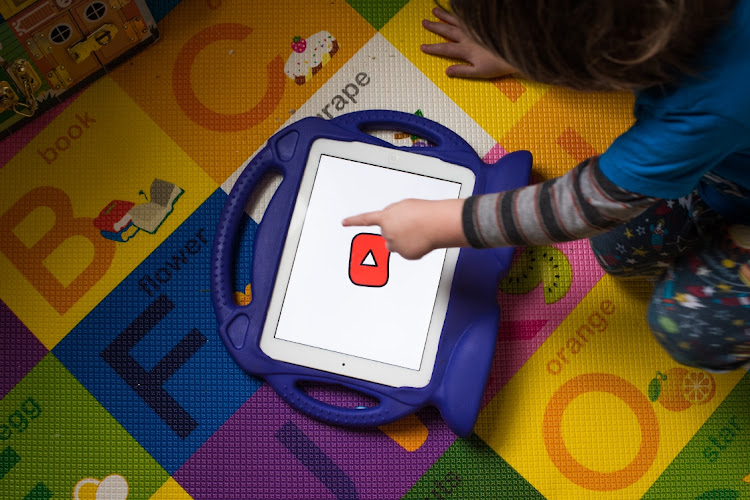 A child interacts with the YouTube Kids application in New York, the US. Picture: BLOOMBERG/TIFFANY HAGLER-GEARD

London — As a schoolgirl, Sarah Cooper became close to an online buddy called “J”, bonding over a love of pop singers like Lady Gaga and Nicki Minaj, and confiding about problems at home. Some two years later he sold her into sexual slavery.

Cooper, from the US city of Boston, told how she was abducted and kept locked in a motel room after agreeing to meet “J”. Guarded by armed men, she was given drugs and sold for sex. “J”, who used a cartoon as his profile picture, was not another teenager as she had assumed, but a much older man who she thinks had researched her online posts to lure her into conversation and build her trust.

With children spending far more time online during Covid-19 lockdowns, Cooper said the pandemic had “created a playground for predators”, and called for global action to tackle the rapid rise in online sexual exploitation and abuse.

Cooper's story is highlighted in a report published on Monday by rights group Equality Now, which examines the failure of international and national laws to keep pace with changing technology and its misuse.

It said predators were increasingly using social media and online gaming platforms to target potential victims because they offer anonymity and operate under very limited regulation.

In the US, more than half of children trafficked for sexual exploitation met their abusers for the first time via text, a website or a mobile app, Equality Now said.

The report also highlighted an “explosion” of online sexual abuse in India, and the dangers of children downloading games and songs that may contain spyware software that can access private images.

The study — facilitated by TrustLaw, the Thomson Reuters Foundation's legal pro bono network — scrutinised legislation in the US, Britain, India Kenya and Nigeria.

A major obstacle to investigating cases is the fact that there may be multiple offenders, victims and platforms, all based in different countries with different laws.

Equality Now called for the creation of a global internationally binding agreement to address such crimes, and for standard definitions and laws to be adopted.

Co-author Tsitsi Matekaire warned that patchwork efforts by individual countries to update their laws in isolation would be ineffective in tackling the scourge.

“The internet is borderless,” she said. “Global challenges cannot be solved in national silos.”

Equality Now said the full scale of the problem was unclear because many cases went unreported due to victims blaming themselves, or being shamed by others.

Cooper, now 24, said she had not gone to the police after she escaped because she doubted she would get justice and was worried her captors might retaliate.

But she said she had decided to go public because she did not want what happened to her to happen to anyone else.

“We need to break the stigma around this,” Cooper said in a phone interview, calling for internet safety to be embedded into school curriculums in every country, and better training for law enforcement agencies.

“Unfortunately, as technology advances, predators are going to find it easier to prey on increasingly young children.”

Steve Grocki, an expert on child exploitation at the US Department of Justice, said technological developments, the move towards encryption, widespread use of the dark web, and even the growth in videoconferencing platform Zoom, were hindering investigations.

The dark web is a part of the internet that lies beyond the reach of search engines.

Tech and crime experts said the picture was particularly worrying in Africa, where many more young people were going online, families did not know about online safety, and police had little to no training in how to investigate digital crimes.

One Nigerian teenager told how she was laughed out of the police station after she reported that a man had shared intimate photos of her online.

Grocki said the US government was sharing its expertise with African countries.

“We are seeing many of the same things we come across in Western countries but it's emerging at a much more accelerated speed in Africa,” he added.

Mohamed Daghar, an expert on trafficking and organised crime in Kenya, said traffickers had exploited the Covid-19 pandemic to prey on children during school closures as they spent more time at home online, often unsupervised.

“The use of technology such as webcams has made it easier to target children,” Daghar said, adding that predators might start by asking a child to send a video of themselves dancing before telling them to remove their clothes.

Schools had focused on setting up online learning during the pandemic without educating children and parents about internet safety, he said.