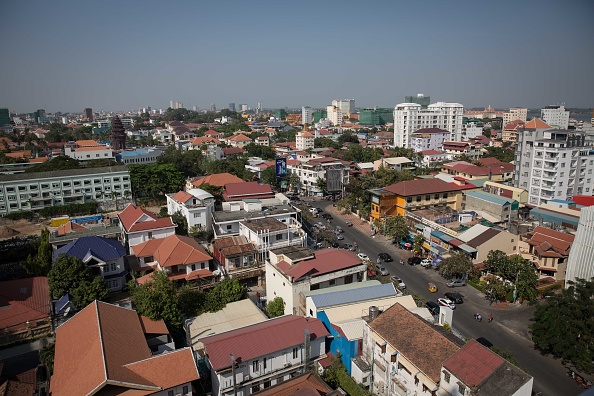 Phnom Penh — Foreign workers and tourists stranded in Cambodia during the Covid-19 pandemic have been trafficked and forced to work in sophisticated Chinese-run online scams, a Thomson Reuters Foundation investigation has found.

In interviews, nine trafficking victims said they were lured by social media adverts promising well-paid jobs in call centres. Instead, they ended up in shuttered hotel casinos and guarded compounds where they had their passports confiscated before being put to work online.

The victims, mainly from Africa and Asia, said they were ordered to create fake profiles on Tinder, WhatsApp and Facebook to entice people into fraudulent investment schemes involving cryptocurrencies, foreign exchange and shares.

Those who objected or performed poorly were subjected to violence and threats, victims said. Mary, a teacher from the Philippines, said she miscarried while locked in a room without food and water for three days.

“We were desperate,” said Mary, who was three months pregnant and four months out of work when she responded in July to a Facebook post offering call centre jobs to English-speaking foreigners.

“We thought it was real work but it became a living nightmare,” said the 26-year-old, whose name has been changed to protect her identity.

Approached for comment on the nine trafficking cases that the Thomson Reuters Foundation uncovered, a spokesperson for the Cambodian interior ministry said, “We also have heard about this before but until now we still do not have any evidence.”

Cambodian police have previously carried out raids and deported hundreds of Chinese on suspicion of telecoms scams. But organised crime experts said the police have struggled to stamp out online crime because of corruption and weak law enforcement.

A Facebook spokesperson said the company would investigate profiles and groups passed on by the Thomson Reuters Foundation.

A spokesperson for WhatsApp said that users should use tools in the app to report suspicious activity.

A Tinder spokesperson said it had “zero-tolerance” for “romance scams” and that it would “work with law enforcement to ensure justice is served in such cases”.

Cambodia shut its borders when Covid-19 struck in March 2020, barred almost all international flights and closed its schools to contain the virus, leaving many tourists and foreign workers unemployed and unable to return home.

For more than a decade, Chinese criminal groups have used Cambodia as a base for online scams that duped Chinese nationals out of billions of dollars. Crime experts said the pandemic has made it easier for these groups to target stranded foreigners.

Four of the nine captives interviewed by the Thomson Reuters Foundation were unemployed teachers — three from Asia and one from Uganda. Another was a construction worker from Bangladesh, three were tourists, and one was a Tanzanian graphic designer.

Two days after agreeing to work at a call centre near the Phnom Penh airport, Mary, the teacher from the Philippines, was in her recruiter’s car, bound for on-site training — or so she thought.

When the car passed the airport, the driver said the induction had been moved to Sihanoukville, a port city about 200km away that has received an influx of money from China, Cambodia’s largest foreign investor.

More than 80 casinos have been built in the city, largely for foreign tourists and online punters as it is illegal for Cambodians to gamble.

Back in 2018, the province’s governor at the time, Yun Min, had warned that the influx of Chinese investment in the region was leading to a surge in crimes by “Chinese mafia”, including kidnapping.

China’s embassy in Phnom Penh declined to comment on the Thomson Reuters Foundation’s findings but called on Cambodia to enforce its online gambling ban, which it introduced in 2019, saying the industry had become a security concern amid rising reports of crime.

“Kidnapping and human trafficking are by-products of illegal online gambling,” a spokesperson said in emailed comments.

“Instead of addressing only the symptoms by focusing on individual cases, full implementation of online gambling prohibition can stem the problem from its root.”

Locked in a Room

Inside a heavily guarded compound in Sihanoukville, Mary said she handed her passport to human resources and was given the tools for her new job: five iPhones and five British SIM cards. She was told to use images of attractive women to create fake identities on Tinder, WhatsApp and Facebook and find people interested in foreign exchange trading.

A few hours in, she told the manager she wanted out. “She started threatening me: ‘We will beat you if you don’t follow our rules’,” Mary recalled her saying. “I told her, ‘I signed no contract. I want to leave. Release me.’”

Mary said the manager replied, “If you won’t work, pack your bags — we sell you to another company.”

She was locked in a room, bare except for three bed frames and two other women, also bound for a new boss, she said. For two nights and three days, they went unfed, drinking water from a toilet in a bathroom which they were allowed to access at the whim of their guards, she said.

Guards had confiscated their phones — but Mary had a second device and was relaying events to her husband who, after reporting the situation to police in Sihanoukville, took up vigil at the compound’s gates.

“I was worried if they transfer my wife, I would not find her again,” he said.

“Sihanoukville is a criminal hotspot created by the confluence of Chinese money, Chinese organised crime groups and a very poor legal environment,” said Coyne, an  former police officer and expert on organised crime in the Mekong region.

Beijing has sent police and planes to Cambodia to take home hundreds of suspected Chinese scammers in recent years, sending a “very heavy and very public ... message to its citizens” about the risks of engaging in crime, said a foreign law enforcement official monitoring the situation.

“The operators shifted to other targets,” said the official, adding that by trafficking more people who speak languages other than Chinese, the gangs are able to target more nationalities.

“Eight new clients per day. If you don’t get eight, you keep working,” said a Tanzanian woman who took what was advertised online as a call centre job in Sihanoukville in June.

“Four hundred of us in one room — cheat, cheat, cheat. That’s the job,” she said, describing how she used fake online profiles to trap people into fraudulent investment schemes.

When the woman told management she wanted to leave, she was locked in a room with Mary and given two options: pay $2,000 or be sold to another company, she said.

The woman shared contact numbers for her trafficker, who told the Thomson Reuters Foundation he was paid a $1,000 commission for each person recruited to work in Sihanoukville but denied recruiting a Tanzanian woman.

The recruiter, who said he was Chinese and gave his name as Li Qiang, said he worked for a large firm that did not have a name, and said that his actions did not involve trafficking. “The employee can leave whenever they want,” he said.

The police chief in Preah Sihanouk province, where Sihanoukville is located, and a spokesman for the provincial administration, declined to comment.

Cambodia has become a popular destination for workers in tourism, construction and education, which have been hard-hit by Covid-19, leaving a pool of “invisible people” for recruiters to prey on, said labour abuse investigator Khun Tharo.

“Many have lost their jobs and they’re very easy to access, very easy to scam,” said Tharo of labour nonprofit Central.

Nehan, a teacher from Nepal who has lived in Cambodia for five years and was laid off during the pandemic, said he responded to a Facebook advert for a call centre job after exhausting his savings — and ended up being enslaved.

“To them, we are just animals; bought and sold like goats and chickens,” he said.

Nehan said he was taken to start work in the shuttered White Sand Palace Hotel in Sihanoukville. “[People] think that during corona time, White Sand is closed, but what happens inside, they don’t know,” said Nehan, who was released after working for a month without pay when he threatened to get his wife to report the scammers to the police.

A woman who answered a phone at White Sand Palace Hotel said it was not possible to speak to management as they had gone “to China”, adding that the hotel was not aware of any online scamming operations on the premises.

Nehan said he was taken to hotel rooms where hundreds of people — mostly Chinese — worked to coax online investors into fake investment schemes and into scanning a QR code embedded in a website that allows them to hack into people’s smartphones.

“They are hackers, thieves,” Nehan said.

All of the victims were told to pay a ransom to be freed, but only one did — an SA tourist, whose mother shared a screenshot of a July payment of $2,047 sent to a Cambodian who negotiated her son’s release.

Six others said they used threats, negotiation and social media posts to win their release. Two are still being held.

The tourist shared photographs of himself in a hospital bed with a bruised face and a bandage around his head, which he said was stitched after he was beaten by his trafficker for trying to rally a walkout from a Chinese-run scamming operation.

“We tried not to do the money thing but in the end we had to. These people beat him up, and it’s just been hell for one month that we’ve been trying to negotiate,” his mother said shortly after his release.

In Mary’s case, her husband shared her ordeal on Facebook after three days, when she told him she thought she had miscarried their baby. He also gave details to local news website Cambodia News English, he said.

“At first [the traffickers] were angry — how was this information getting out? I had videos and photos from inside,” Mary’s husband said.

After threatening violence and demanding a $1,500 ransom, a deal was reached: Mary would be freed if he deleted the Facebook posts, he said. The couple agreed and are now in hiding, unable to leave Cambodia together due to Covid-19 travel restrictions in their home and neighbouring countries.

“Right now, we feel only anger and fear,” Mary’s husband said. “I can’t sleep. When I close my eyes, I can only imagine our child. When my wife sleeps, she shakes.”

Herero and Nama citizens have opposed the deal, saying their leaders were not represented in the negotiations
Opinion
9 months ago

While the destruction of Brazil's Amazon rainforest has sparked an international outcry, little attention has been paid to labour abuses
World
10 months ago
Next Article