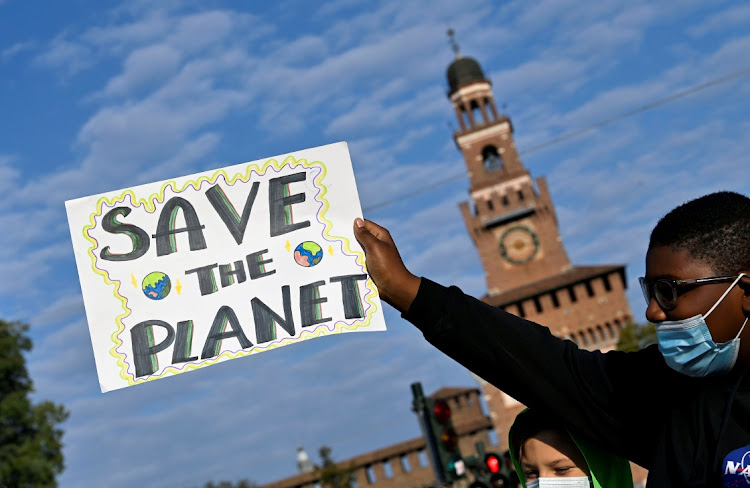 A demonstrator holds up a sign on October 1 2021 as he attends a Fridays for Future climate strike in Milan, Italy ahead of Glasgow's COP26 meeting. Picture: REUTERS/FLAVIO LO SCALZO

The history of UN climate conferences is a history of failure. That comes with the territory. If any one meeting was to solve all the problems of preventing catastrophic global warming, there would be no need for any further action.

That’s the best way to think about the disappointing outcome of talks between the Group of 20 large economies ahead of this week’s Glasgow climate summit. The communique from participants failed to make a firm pledge to phase out coal, one of the key targets of the UK’s negotiators. Commitments on reducing methane emissions were also missing from the final communique, and the date the world will hit net zero was described as “by or around mid-century” rather than 2050, while other language was softened or removed.

That doesn’t appear to bode well for what will come in the next fortnight — but it’s not the case that all is lost, yet.

For one thing, getting an agreement from the G-20 isn’t just an appetiser before the main diplomatic feast. All the key large economies that will make an agreement so hard to hammer out in Glasgow were also party to the negotiations in Rome. Members of the G-20 span the biggest fossil fuel exporters such as Russia, Saudi Arabia and Australia; major consumers such as China, the US , and India; rich nations like Japan and France; and relatively poor ones like Indonesia and Brazil. With the real negotiations yet to begin, each side is keeping its cards close to the chest.

Thinking of the process as a card game is a useful way of seeing what is happening. In game theory, one widely used way of analysing global affairs, the classic paradox of the prisoner’s dilemma demonstrates that individuals’ best strategy is to rat out their fellow players and leave all parties worse off. That’s troubling — but if you run the game repeatedly, a strange thing happens: The benefits of co-operating to provide a mutually beneficial outcome start to rise, because bad actors suffer reputational damage and are shunned by their peers.

That’s in essence the structure that the UN’s Conferences of the Parties, such as COP26 in Glasgow, are replicating. Individual meetings are expected to fall short. Because of this, the 2015 Paris Agreement includes a “ratchet mechanism,” under which the countries keep increasing the ambition of their climate targets every five years. (Hopes are so high around Glasgow precisely because it’s the first twist of that ratchet since Paris.)

It scarcely helps that the success of such events often depends on the diplomatic skills of their host governments. That’s not cause for optimism, given how the UK has spent five years alienating its largest trading partners and is currently blowing up a routine dispute with France over fishing rights with analogies to the 1982 Falklands conflict.

Some disappointment is inevitable. Even if the Chinese and Indian coal fleets shut down over the next two decades because they’ve been driven out of business by cheaper renewables, it’s unlikely that the nations’ leaders would commit to such a path at this stage. Even Paris — now remembered as a landmark success of climate diplomacy — was seen by many at the time as a climbdown, thanks to the belated acceptance that all 197 member states were never going to agree to a legally binding treaty like the earlier Kyoto Protocol, or the Montreal Protocol on ozone-damaging chemicals.

The Paris conference didn’t herald any great change, Benjamin Sporton, then-CEO of the World Coal Association, told the Financial Times after that event. He couldn’t have been more wrong: Coal consumption is now about 10% below what the International Energy Agency thought it would be at the time, and the IEA’s long-term scenarios have switched a picture of unending demand growth to one where consumption had already peaked when Sporton was talking.

The coming weeks are likely to see plenty of disappointments and recriminations. The time left to tackle the climate crisis grows shorter with each meeting, and we can’t afford to waste any opportunity to bend the curve. Away from the conference halls, though, a more important story is unfolding: a revolution in the energy systems that have powered the world since the Industrial Revolution. A stronger agreement would certainly accelerate that process — but the lack of a deal won’t be enough to reverse it.

David Fickling is a Bloomberg Opinion columnist covering commodities, as well as industrial and consumer companies. He has been a reporter for Bloomberg News, Dow Jones, the Wall Street Journal, the Financial Times and the Guardian.

Biden set to give assurances over US’s emissions promises

US president is committed to largest investment to combat the climate crisis in American history, climate aide says
World
7 months ago

Can we avoid gridlock on the road to carbon neutrality?