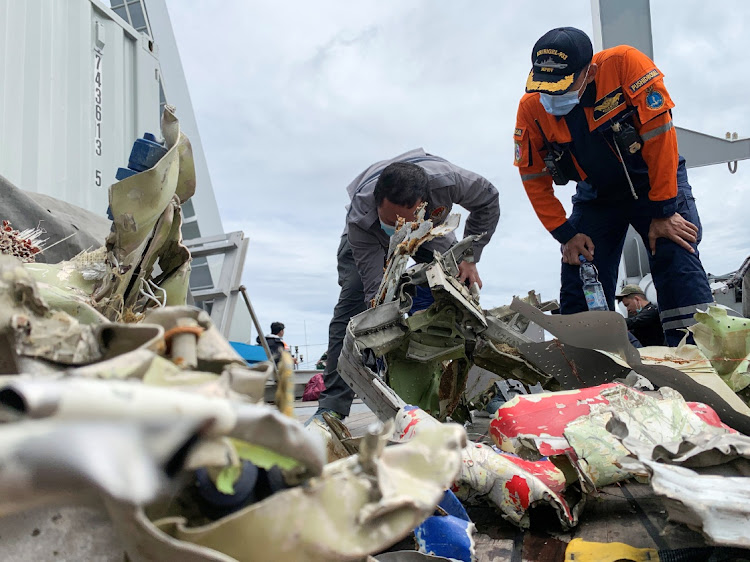 Washington — The crash of Sriwijaya Air Flight SJ182 — still a vexing mystery — falls into a broad category of airliners that suddenly plunge out of the sky.

Such violent descents make up a small percentage of overall accidents, but account for an outsize portion of deaths because they almost inevitably kill everyone aboard. While the airline accident rate has steadily improved, there have been multiple crashes of that type in recent decades.

The Sriwijaya flight, with a 26-year-old Boeing 737-500 jet, took off from Jakarta with 62 people on January 9 and at first flew what appeared to be a routine trajectory, according to a flight track produced by Flightradar24.

After reaching 3,050m, it levelled off for about 45 seconds, according to the data.

At about that time, an air traffic controller radioed the plane to say it was off course, said transportation minister Budi Karya Sumadi. There was no response. At roughly the same time, the plane turned left by about 40 degrees in the opposite direction from which it had been directed.

At that point, the jetliner began an abrupt descent.

It dropped by close to 3,000m in about 14 seconds, which would mean it was descending at about 12,000m a minute. That far exceeds any sort of normal flight activity, even an emergency manoeuvre to get to lower altitudes.

Aviation safety analysts cautioned that it is far too early to say what caused the crash. Numerous factors including some type of malfunction, pilot actions or even a suicide remain possible, they said. While rescue workers say they think they have located the jet’s two crash-proof flight recorders, the black boxes have yet to be retrieved from beneath the Java Sea.

“I would not take anything off the table yet,” said John Cox, president of Safety Operating Systems and a former airline pilot. “We just don’t have the data.”

Here are several scenarios in which planes fell from the sky, which show similarities and differences with the Sriwijaya Air flight:

This was the second of two accidents attributed to a flaw in the 737’s rudder. All 132 people aboard died in the crash near Pittsburgh.

As the plane, a 737-300, approached for a landing at an altitude of about 1,800m, its rudder jammed to one side, the US National Transportation Safety Board concluded. The plane rolled sharply to the left and its nose pointed down towards the ground.

The aircraft in the Indonesia accident was in the same family of 737 jets, but the two accidents seem unlikely to be related, said Jeffrey Guzzetti, former chief accident investigator with the US Federal Aviation Administration.

Several years after the accident, the FAA mandated a rudder fix for all 737s. There has not been an accident blamed on the system since.

The issues identified in the Pittsburgh crash and an earlier one in Colorado were limited to a narrow speed band, and the Sriwijaya Air plane was flying too fast for it to fall prey to the same loss of control, Guzzetti said.

This Airbus SE A330 carrying 228 people from Brazil to France plunged into the Atlantic Ocean from a cruising altitude above 9,000m.

The instruments used to determine airspeed malfunctioned after ice formed on them and pilots became disoriented, climbing and allowing the plane to slow dangerously and enter an aerodynamic stall, French investigators found. All aboard died.

But it is unlikely that ice would have formed on the Sriwijaya Air jet, which was flying at much lower altitudes.

The Air France aircraft also fell at a far slower rate than the Indonesian plane. The A330 jet was rocking side to side instead of diving and dropped at an average of about 3,000m a minute, according to the investigation. That is several times slower than the Sriwijaya Air plane.

As the cargo jet, a Boeing 767-300, approached Houston carrying packages for Amazon.com, a co-pilot accidentally added engine power. Apparently disoriented and thinking the plane’s nose was dangerously high, he then pushed the plane into a steep dive, according to the National Transportation Safety Board.

The jet reached speeds of 805km/h in seconds, smashing into a marsh in Trinity Bay and killing the three people aboard. The preliminary data in Indonesia shows that plane was diving at similar speeds.

It is possible that disoriented pilots on the Sriwijaya Air plane made a similar mistake, Guzzetti said.

A Flydubai crash in Rostov-on-Don, Russia, on March 19, 2016, was the result of similar pilot disorientation as in the Atlas Air flight, prompting the 737-800 to plummet from an altitude of about 1,200m, according to Russia’s Air Accident Investigation Commission. All 62 people aboard died.

While the Flydubai plane involved different circumstances, it also shows how a flight crew can inadvertently trigger such a dangerous dive, Guzzetti said.

This 737-300 carrying 104 people mysteriously dived into a river in the area of Palembang, Indonesia, from 10,000m after both crash-proof recorders were disabled.

The plane was diving so fast — close to the speed of sound — that it began breaking apart, according to investigators.

While cautioning that it is far too early to suggest the Indonesia crash was intentional, such a scenario at least has to be considered, said both Cox and Guzzetti.