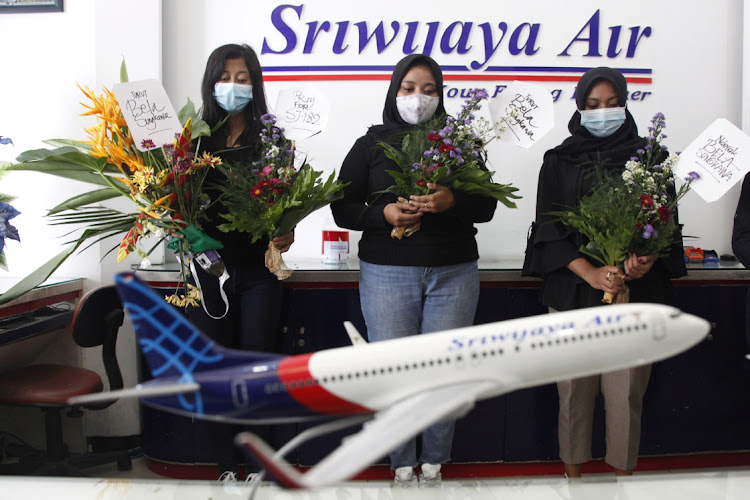 Women hold a vigil for passengers of Sriwijaya Air's flight SJ182, which crashed into the sea off the Jakarta coast, in Solo, Indonesia, January 10 2021. Picture: ANTARA FOTO/MAULANA SURYA/REUTERS

Jakarta — Indonesian investigators said on Sunday the crashed Boeing aeroplane carrying 62 people operated by Sriwijaya Air broke apart on impact with the sea off the Jakarta coast, which could rule out a midair break-up.

National Transportation Safety Committee chair Soerjanto Tjahjono shared his conclusion by text message, without elaborating. A search-and-rescue team has located the crash site where the aeroplane went down just minutes after take-off on Saturday, with authorities saying they expect to retrieve the aircraft’s black boxes as soon as Sunday evening.

Debris suspected to be from Flight SJ182 has been found along with emergency signals transmitted by two devices, with the search team already locating both flight recorders, according to officials.

“We believe that it is the location of the crash,” military chief Hadi Tjahjanto said in a televised briefing. Items found 23m underwater include life vests and parts of the aircraft that bear its registration number, he said.

Confirmation that the jet had crashed came about 20 hours after it went missing after its departure from capital Jakarta, and Indonesian President Joko Widodo called for maximum effort to search for and rescue the victims.

While the cause hasn’t been determined, the accident has once again pushed the country’s aviation industry into crisis mode. Indonesia has had a spate of aeroplane crashes in the past decade, including the Lion Air Flight 610 disaster that killed 189 people in 2018, the first of the two 737 Max crashes that led to a global grounding. In December 2014, an AirAsia Group aeroplane plunged into the Java Sea with 162 people on board.

The plane that Sriwijaya Air was flying is a 737-500 model that’s much older than the 737 Max aircraft.

Weather has been a contributing factor in several of the past crashes. On Saturday, heavy rain in Jakarta delayed the take-off for the 90-minute SJ182 flight to Pontianak on the island of Borneo.

It finally took off at 2.36pm local time, reaching 1,700 feet a minute later, when it was cleared by Jakarta air traffic controllers to ascend to 29,000 feet, according to transportation minister Budi Karya Sumadi. Four minutes after take-off, controllers noticed the aircraft was not on its assigned track. It radioed the crew, and within seconds, the aircraft disappeared from radar, he said.

Flightradar24’s tracking data showed the jet levelling off at an altitude of about 10,000 to 11,000 feet 3 minutes after taking off, before a rapid descent to the water in just 14 seconds. That meant it was dropping at more than 40,000 feet per minute, a rate far above routine operations.

“While we have to wait for the final report of the investigation to know the true cause of the incident, but the preliminary data appears pointing to possible disorientation in the cockpit, to which the bad weather is a factor here,” he said.

Without access yet to the plane’s black-box flight recorders, it’s impossible to say what may have triggered the sudden dive, said Jeffrey Guzzetti, the former head of accident investigations at the US Federal Aviation Administration. He said flight-crew confusion, instrumentation problems, catastrophic mechanical failures or even an intentional act were among the possible scenarios.

Indonesia deployed divers, warships, vessels with sonar and aeroplanes on Sunday. Of the 62 people, 50 were passengers, including seven children and three infants, and there were two pilots, four cabin crew and six off-duty crew, local media reported. There were no foreign nationals on board.

Boeing is “closely monitoring the situation”, spokesperson Zoe Leong said in a statement. “We are working to gather more information.” Sriwijaya Air said it will work with relevant authorities in evacuation and investigation efforts.

The 737-500 model first flew in 1989 and, according to tracking website Planespotters.net, this particular plane first flew in May 1994.

“This is not even the model before the Max, it has been in service for 30 years so it’s unlikely to be a design fault,” said Richard Aboulafia, an aviation analyst at Teal. “Thousands of these planes have been built and production ended over 20 years ago, so something would have been discovered by now.”

The crash comes as the aviation industry is reeling from the effects of the coronavirus pandemic, which brought air travel to its knees. Covid-19 tore through in a tumultuous, unprecedented way — leaving carriers in a deep hole, along with a constellation of aerospace manufacturers, airports and leasing firms.

The International Air Transport Association said last week that global passenger demand dropped significantly during November, down 70% versus the same period of 2019 when measured in revenue passenger kilometres.

“While we don’t know anything else about the cause of this crash, the biggest thing concerning me is serious concerns about Indonesian air safety standards that were identified by the EU Aviation Safety Agency and others years ago,” Aboulafia said. “I am not completely certain that the proper procedures have been put in place.”

The US National Transportation Safety Board has appointed a senior investigator to assist in the probe, but is awaiting more information before determining whether it will send a team, it said in an e-mailed statement. Under a UN treaty, the NTSB along with technical experts from Boeing and possibly the manufacturers of other components would participate in the probe because the jet was built in the US.

Indonesia’s transportation safety committee has started its probe, including by retrieving air traffic communication and radar information as well as by interviewing officials who were on duty, according to investigator Nurcahyo Utomo. The committee is working with the government to let foreign investigators enter the country despite the current travel ban, he said.

Indonesia, which had one of the fastest-growing airline industries in the world before Covid, has a patchy safety record when it comes to air accidents. Its poor aviation history saw carriers from the nation banned from the EU in 2007 and it was only in June 2018 that the full ban was lifted. In 1997, Garuda Indonesia Flight 152 crashed approaching an airport in Medan in north Sumatra, killing 234. The AirAsia Flight 8501 that crashed in late 2014 was en route to Singapore from Surabaya.

On October 29 2018, the Boeing 737 Max flown by Lion Air plunged into the Java Sea 13 minutes after take-off, killing all 189 passengers and crew. That was Indonesia’s second-deadliest aircraft accident.

Lack of flying time may be a factor. On September 15, an Indonesian flight carrying 307 passengers and 11 crew to the northern city of Medan momentarily veered off the runway after landing, sparking an investigation by the transport safety regulator. It found the pilot had flown less than three hours in the previous 90 days. The first officer hadn’t flown at all since February 1.

Saturday’s accident also follows a tumultuous period for Boeing, which only in November had its 737 Max cleared to fly again by the US Federal Aviation Administration, ending the longest grounding of a jetliner in US history. Brazil’s Gol Linhas Aereas Inteligentes  was the first airline to resume regular flights using the jet, beginning December 9 on domestic routes from Sao Paulo. American Airlines   has since also reintroduced the Max on Miami-New York flights.

Earlier this month, Boeing reached a $2.5bn agreement with the US justice department to settle a criminal charge that it defrauded the US government by concealing information about the 737 Max, capping a two-year investigation that devastated the company’s reputation for engineering prowess.

Sriwijaya Air was established in November 2003.

2019 results show a tragic and turbulent year for Boeing