Men from Chloorkop out to underline dominance by taking Nedbank Cup 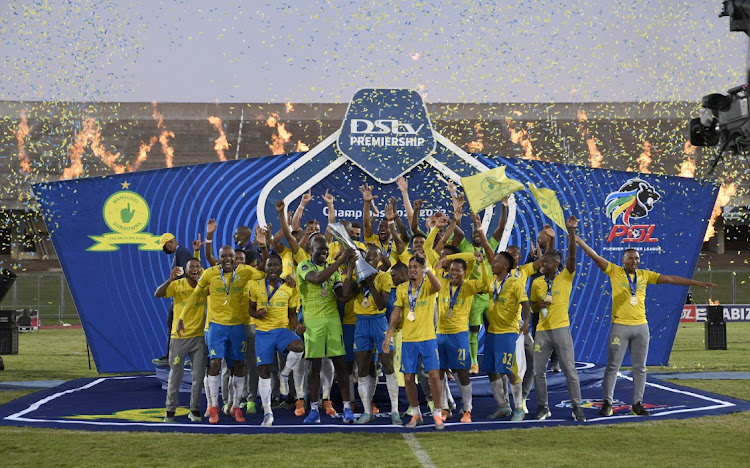 HUNGRY FOR MORE: Mamelodi Sundowns have already celebrated winning the DStv Premiership 2021-22, as well as the MTN8 trophy at the start of the campaign, and look to adding the Nedbank Cup to complete a treble of trophies.
Image: BACKPAGEPIX/ SYDNEY MAHLANGU

Mamelodi Sundowns will seek to complete a domestic treble this season when they take on Marumo Gallants in the Nedbank Cup final at the Royal Bafokeng Sports Palace on Saturday.

The Brazilians breezed to the Premier Soccer League title with four rounds to spare and claimed the MTN8 trophy at the start of the campaign with a hard-fought penalty shoot-out victory over Cape Town City.

Now they stand on the cusp of another trophy with a Nedbank Cup decider against holders Gallants and their wily coach, Dan Malesela.

Three trophies in one season would not be unprecedented for Sundowns.

They claimed their maiden treble in an excellent 1988 season in which they won the league title by a point from Jomo Cosmos, and lifted the BP Top 8 with a 1-0 victory over Arcadia in a final replay. The first two legs resulted in a 2-2 aggregate score.

They added the Ohlsson’s Challenge to their haul, also secured via a 1-0 win over Arcadia.

That feat was repeated in 1990 when they claimed a second treble in three years with a league title triumph as they edged Chiefs into second by two points.

It would be a long wait for another season as successful as that, though.

They secured their most recent domestic treble in the final season in which coach Pitso Mosimane was in charge before he left for Al Ahly.

It was also the last time the Telkom Knockout would be played before it was scrapped.

Sundowns defeated Maritzburg United 2-1 in the final of that competition, before edging Chiefs on a dramatic final day of the league campaign when the latter were held to a 1-1 draw by lowly Baroka FC.

Downs completed their treble with a 1-0 victory over Bloemfontein Celtic in the Nedbank Cup final, played behind closed doors in the Gauteng bio-bubble.

Given that there are now only three domestic trophies on offer, securing the treble has become a challenging feat, but it helps that Downs have a trio of top coaches in their ranks.

Manqoba Mngqithi has never been head coach, though he was assistant at Sundowns when they won in 2015 and 2020.

The same goes for Rhulani Mokwena, whose time at the club started at about the same time as Mngqithi, though he spent time away at Orlando Pirates and Chippa United.

Senior coach Steve Komphela only joined Sundowns after that 2020 triumph, so he will be seeking to lay his hands on the Nedbank Cup for the first time.

It has been a relatively gentle road to the final for Sundowns this year, having faced two teams from the third tier of SA football.

Downs were at their ruthless best against GladAfrica Championship side Richards Bay and schooled the KwaZulu-Natal club in the level needed to be an elite league club with a 4-0 victory.

They then faced Free State ABC Motsepe League side Mathaithai in the second round and though it took them a little time to click into gear after a fast start, the match ended in a 6-0 rout.

Downs then mixed it up with another much-changed team as they took on KwaZulu-Natal ABC Motsepe League side Summerfield Dynamos in the quarterfinals, but once again were far too strong for their opponents, winning 5-0.

The men from Chloorkop sealed a place in the decider with a 2-1 semifinal victory over hosts Royal AM.  — Supersport.com

Arthur Zwane is named as Chiefs’ new head coach, an appointment many players will welcome given their respect for the strict, straight-talking mentor
Sport
1 month ago