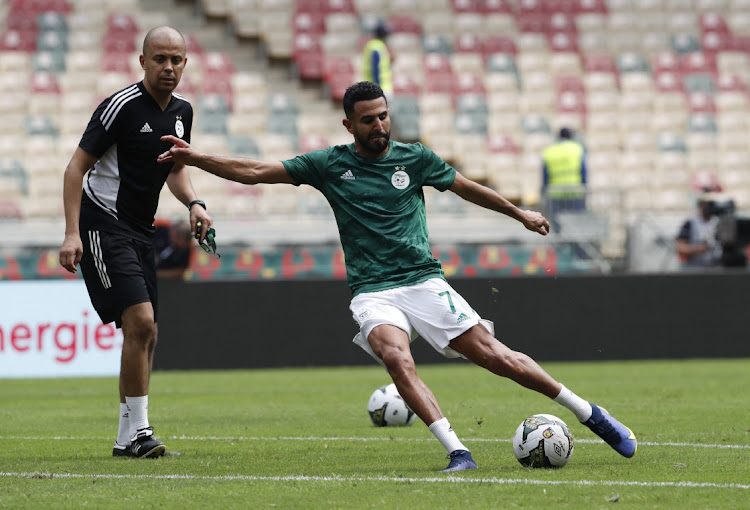 Algeria's Riyad Mahrez during the warm up before the Group E match against Sierra Leone at the Stade de Japoma in Douala, Cameroon. January 11 2022. Picture: REUTERS/MOHAMED ABD EL GHANY

Holders Algeria were held to a surprise goalless draw by Sierra Leone as they made an uninspiring start to the defence of their Africa Cup of Nations title in Douala on Tuesday.

Algeria were expected to get their Group E campaign at the tournament in Cameroon off to an easy start against minnows Sierra Leone, who were returning to the tournament for the first time since 1996.

But it proved a brave showing by the West Africans as they clung on for a point in sweltering heat in the port city.

Algeria came close to opening the score in the second minute as Riyad Mahrez fed Islam Slimani, who went round the Sierra Leone goalkeeper but ran out of room to try to find the target from a tight angle.

But Sierra Leone quickly showed they were no easy walkover as they came storming back down the other end and were close to scoring through Alhaji Kamara’s sixth minute effort.

Kamara went close with a header midway through the first half from a free kick as Algeria struggled in the heat.

Yacine Brahimi had two chances after the break to put the Algerians in the lead as they began to exert their authority, with Mahrez at the heart of their attacking moves.

His ball set Brahimi in on goal in the 52nd minute but the veteran midfielder scuffed his shot and allowed goalkeeper Mohamed Kamara to make a one-handed stop and gather at the second attempt.

Brahimi’s second chance came on the hour mark but the shot was hit straight at Karama.

Sierra Leone’s new cap, Steven Caulker, the former England international who switched allegiance on the eve of the tournament, then made a vital block to deny substitute Sofiane Bendebka seven minutes later.

Caulker, who struggled with cramp late in the game, again denied him about 10 minutes later with another important intervention.

Mahrez’s 80th minute effort was turned around the corner by Kamara and five minutes later substitute Said Benrahma missed a good opportunity as Algeria's frustration continued amid a frenzied late finish that failed to produce a victory.

The result did, however, extend Algeria’s unbeaten run to 35 matches, putting them within touching distance of the record of 37 undefeated internationals in a row set by European champions Italy last year.

The second Group E game is being played on Wednesday in Douala when Equatorial Guinea meet the Ivory Coast.

Minnows come close to a big upset
Sport
1 week ago