Last 10 minutes and 4-1 loss to Royal AM was embarrassing, coach says 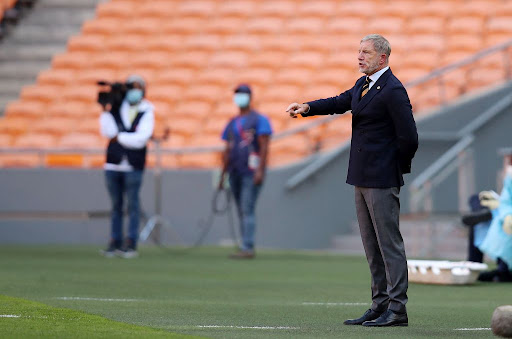 An animated and frustrated Kaizer Chiefs coach Stuart Baxter during the club's league match against Royal AM at FNB Stadium in Johannesburg on Saturday. Picture: GALLO IMAGES/BACKPAGEPIX/MUZI NTOMBELA

Admitting such a heavy defeat came as a blow to the effort of building a combination with a new-look squad, Baxter said.

Going 2-0 down left Chiefs chasing the game. He admitted Amakhosi ended the game in disarray, as Royal strolled in a fourth goal in the 95th minute via substitute Mfundo Thikazi’s finish.

Baxter apologised to Chiefs’ supporters for an “embarrassing” last 10 minutes.

“I think the first 30 minutes we picked up a bit where we left off, the structure and movement were quite good, and we were creating chances,” Baxter said. “But again we failed to take those chances. And again we gave up a rather unnecessary and sloppy goal.

“We get into a situation where we have to chase the game. But we’ve got plenty of time so we try to stay patient, but then [Phathutshedzo] Nange gets his injury [going off in the 42nd minute] and we lose a bit of balance.

“But we come in at half time and we’re talking about sharpening certain aspects of our game, and not overhauling the game.

“Then when we conceded the second goal you’ve got to really chase the game, so we go to a back four. And maybe that makes it a bit more complicated for the players, maybe that’s something the coach has to consider.

“The nervousness after that, lack of quality and naiveté of some of our decision-making made it very difficult to get back into the game. Even though we got a goal back, we allowed a goal straight away and the last 10-odd minutes were quite embarrassing. We need to apologise to our supporters for the manner in which the game finished,” Baxter said.

He said Chiefs’ spacing and finding the balance between defence and attack has been a problem at the start of the 2021-2022 season. The coach was asked if Amakhosi might be missing a tough screening player in front of his defence in the style of Willard Katsande, the 10-year servant released to join Sekhukhune United in the off season.

“I don’t want to be back-heavy. I don’t want to have a tight defence but then we don’t play expansive football. So we’re finding that balance,” the coach said.

“Whether we have a player like Willard, no we don’t have a player who sits. Anthony Akumu, when he came in [for Nange], was going to do that role.

“But we don’t have that the way we’re playing at the moment. We have an extra centreback [in a 3-4-3 formation] who steps up, rather than the midfield player who drops in. So we should compensate for it. But at the moment we’re making such poor decisions in moments of the game.”

Victor Letsoalo’s strikes in the 34th minute, profiting from loose defence at a cross, and 66th, from a free-kick, put Chiefs under pressure.

Sifiso Hlanti’s deflected free kick pulled one back in the 74th, but two minutes later Chiefs substitute Sibusiso Mabiliso’s block off a cross ricocheted into his own net, before Thikazi’s injury-time strike.