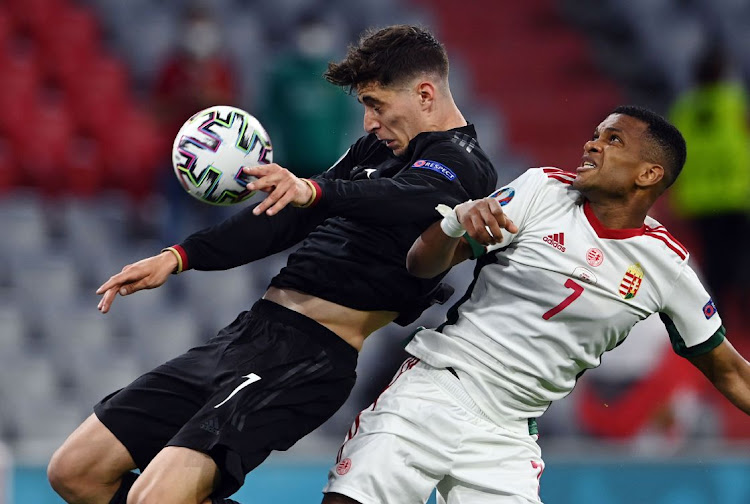 Herzogenaurach — Germany are not doing major penalty training ahead of their Euro 2020 round-of-16 match against England at Wembley Stadium on Tuesday, saying they hope to finish off the game within 90 minutes.

The Germans have won every single World Cup penalty shoot-out they have done, as well as two out of three at the Euros, losing only their first one in the 1976 Euro final to Czechoslovakia.

They also beat England on penalties at Wembley in the semifinals in the 1996 edition before going on to win their third European crown.

“We are going into the game wanting to win it over 90 minutes,” Germany midfielder Kai Havertz told a news conference at their team base in Bavaria on Sunday.

“It could of course go to penalties at this stage of the tournament so we have to be prepared. Obviously after training we hit a few penalties to see who the better penalty takers are.

“But it is not the biggest issue of the game. The 120 minutes before that could be far more important and putting too much pressure on yourself [with penalties] is not good.”

The Germans won just one game in their group but advanced in second place after a nervous 2-2 draw against Hungary.

England were equally unimpressive but more efficient to top Group D with seven points and no goals conceded, but they are the lowest-scoring team ever to top a Euros group, with just two goals.

“It would be wrong to underestimate them. We know England well. They have some of the world’s best players and, yes, they also have room for improvement,” said Havertz, who will come up against several of his Chelsea teammates on Tuesday.

“But England have not yet conceded a goal in the tournament and they have so many individual qualities. You have to respect them but we are also a team with good players. For me and the entire team it will be a special game.”

For their part, England will be completely focused and well prepared if their European Championship last-16 meeting with Germany goes into a penalty shoot-out on Tuesday, said defender John Stones.

The team banished a decades-long curse of failing in penalty shoot-outs with a nail-biting 4-3 round-of-16 victory over Colombia in the 2018 Fifa World Cup, where they finished fourth. “With how we do it now, we’ve been practising so much,” Stones was quoted as saying by the BBC.

“We’ve been practising on keeping clear focus on what to do if your turn comes up.”

Memories of England’s Euro 1996 semifinal defeat by Germany on penalties are still fresh for some supporters, but Stones said the team would leave nothing to chance. “I remember being seventh in the World Cup [match against Colombia in 2018] after Eric Dier. That was a scary moment,” Stones said.

“Unless it’s Harry Kane or the boys who take penalties for their clubs regularly, it’s a zone that we’ve not stepped into before. But I was ready because of this process that we’ve always talked about. It’s about making you as comfortable as possible in that situation.”

Stones said his side was eager to continue their progress to “change the way the nation looks at the team and English football”.

“I think we’ve taken massive strides in that since 2018 and it’s about doing it again. I don’t think we should put any more pressure on ourselves,” Stones said.

“There’s a trophy to be won here that’s never been won before, and we should be super excited by that and go in with that fearlessness that we’ve had over these years.”