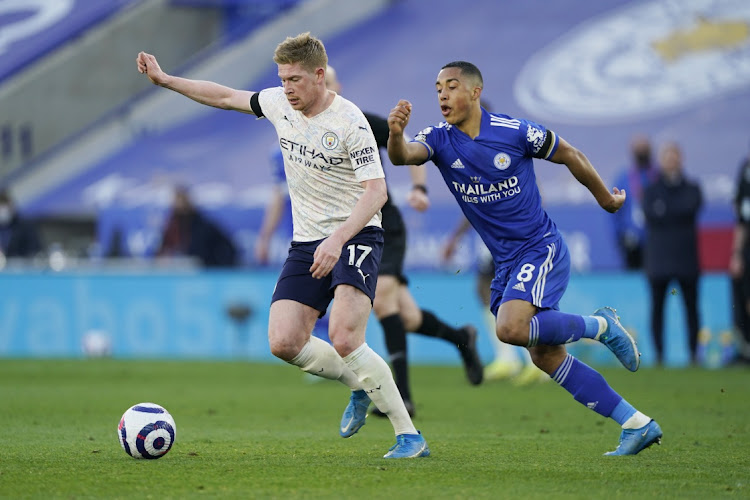 Manchester — With Manchester City heading for their third Premiership title in four seasons, Kevin De Bruyne is back to his best pulling the strings in the City midfield.

In other talking points from the weekend, Arsenal manager Mikel Arteta must be a worried man as his team lose their way yet again, while Manchester United ground out another three points to cement second spot behind City.

De Bruyne hitting form just in time: De Bruyne has delivered so many outstanding performances for Manchester City that it is pointless trying to rank them, but his display in Saturday’s 2-0 win against Leicester was certainly an exhibition of his qualities.

Back to full fitness and back in his preferred central midfield role, the Belgian struck the bar with a thundering free-kick before the break and then set up City’s opener with his superb defence-splitting pass to Gabriel Jesus.

With City still in the running for an unprecedented four trophies and a big Champions League quarterfinal against Borussia Dortmund coming up on Tuesday, De Bruyne is hitting peak form at just the rate moment.

“Kevin was injured for some part [of the season] and some players struggled after we finished late last season. He has arrived in a good moment,” said City manager Pep Guardiola. “Kevin is talent. I say to Kevin to score goals. He was unlucky he hit the post — but he has his vision and ideas”.

Arsenal surrender a worry for manager: When Mikel Arteta described Arsenal’s 3-3 with West Ham United before the international break as evidence of the “two-faced” nature of his side, he presumably hoped it would be the better one that emerged when the Premier League resumed.

Sadly for the Spaniard, his Arsenal side offered a meek, mild and sterile display against Liverpool and were duly spanked 3-0 when it could have been a lot more.

As the season reaches its final weeks the worry for Arteta is that rather than showing signs of progress, his side appear to be regressing and loud questions are being raised about whether he is the man to point the club back in the right direction.

He has now been in charge of 50 Premier League games, winning only 21 and losing 17 — a worse record than Unai Emery, the man he replaced, who won 25 of his 51 games at the helm.

Man United grind out another vital win: Manchester United took a big step towards securing Champions League football next season after they came from behind to beat Brighton & Hove Albion 2-1 at Old Trafford and stay second.

Despite yet another unimpressive home performance against struggling opposition, United eked out three valuable points as their newly-found steel under manager Ole Gunnar Solskjaer made the difference.

With eight games remaining, United are in a commanding position to seal a top-four finish as they head into the Europa League quarterfinals against Spanish side Granada aiming to win the continent’s second-tier competition.

Newcastle tune out the noise in survival bid: While it seems like Newcastle United fans want Steve Bruce out with the club hovering above the relegation zone, the players seem to be fighting for him and it was evident when they snatched a point against Tottenham Hotspur.

“We all believe in the manager,” Joe Willock, who scored an 85th-minute equaliser, said after the game, while Bruce praised the “spirit and togetherness” in the squad after putting up with “so much nonsense” in recent weeks.

Newcastle sit three points above 18th-placed Fulham with a game in hand, but Bruce’s side are yet to play Liverpool, Arsenal, Leicester City and Manchester City — with Fulham on the final day potentially becoming a relegation dogfight.

Hope for West Brom and Allardyce? Chelsea manager Thomas Tuchel found out the hard way how unforgiving the Premier League can be as he suffered his first defeat, the club’s worst home loss in a decade, when West Bromwich Albion ran riot in a 5-2 hammering.

The result was not simply a case of a man advantage after Thiago Silva was sent off. Sam Allardyce can be optimistic about their survival hopes with 17th-placed Newcastle United eight points above them with eight games to go.

Matheus Pereira and Callum Robinson proved West Brom can turn it on when needed, but the only question is if the team can sustain that tempo in the final stretch to help Allardyce keep his record of never being relegated from the top flight intact.

Young forward ‘was bright, tidy, clean on the ball’ and may feature more often during the rest of the season
Sport
1 week ago