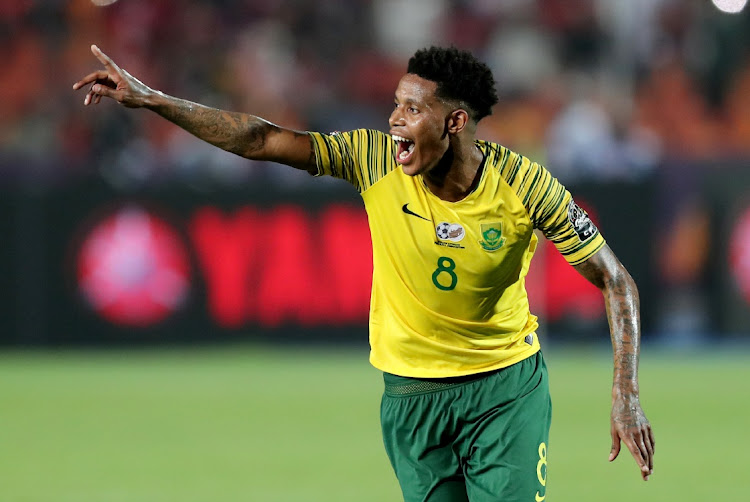 Ntseki included Zungu despite a disciplinary infraction in February that saw the midfielder having to isolate for two weeks after being caught at a house party with four other Rangers players.

At the time it seemed Zungu, who is on loan at Rangers, might have damaged his chances of making the move to the Scottish league leaders permanent. However, Rangers manager Steven Gerrard appeared to hand the midfielder a lifeline when sending him on as a substitute in a match against Livingstone in midweek.

Ntseki said the SA Football Association had been in contact with Rangers‚ who opted not to impose further sanctions on Zungu. Ntseki said he also spoke to the player who he said “had apologised to me”.

Ntseki’s desire to include the experience of Zungu was understandable given how Covid-19 conditions have decimated his options in terms of injuries and players unavailable.

The coach said given that Bafana goalkeeper Ronwen Williams was the only keeper playing regularly‚ that department was a headache in his selection process‚ hence the inclusion of Kaizer Chiefs’ Itumeleng Khune despite only recently earning game time‚ and AmaZulu’s Veli Mothwa.

He said the death of Mamelodi Sundowns defender Motjeka Madisha in a car crash was also a blow to his plans.

Bafana team doctor Thulani Ngwenya said Lebogang Phiri and Lebo Mothiba have recently returned to their clubs in France‚ affecting their chances of a recall.

Pirates’ Thembinkosi Lorch and Lamontville Golden Arrows’ Nkosinathi Sibisi are out with injury. SuperSport  midfielder Teboho Mokoena and Cape Town City defender Abubakker Mobara have recently returned from injury‚ but not in time to make the SA squad.

Kamohelo Mokotjo was ruled out because his US Major League Soccer team FC Cincinnati have been out of action as the MLS has been suspended.

Ntseki had said his life would be made difficult selecting a squad because of injuries and rate of rotation at clubs enforced by Covid-19 conditions‚ such as no real domestic preseason and matches coming thick and fast.

After four matches‚ and with the last two to be played‚ Group C is tight. Ghana and SA have nine points‚ the Black Stars leading by a superior goal difference (+4 to +3).

Third-placed Sudan have six points (goal difference +2) but seem likely to pick up three more away against group whipping boys Sao Tome and Principe before the match in Khartoum.

A draw against Ghana will place Bafana on 10 points‚ and needing a win or draw from their final game away to Sudan (if Sudan beat Sao Tome) to progress. A defeat against the Black Stars will leave SA needing a win against the Sudanese to qualify.

The South Africans will also hope Sao Tome can hold Sudan to a draw or even beat them in the West African island nation to make Bafana’s task easier.

The overseas-based players test before leaving their base countries.