‘Ghost games’ kick off in Germany

Bundesliga football resumes with cardboard cutout fans in the stands 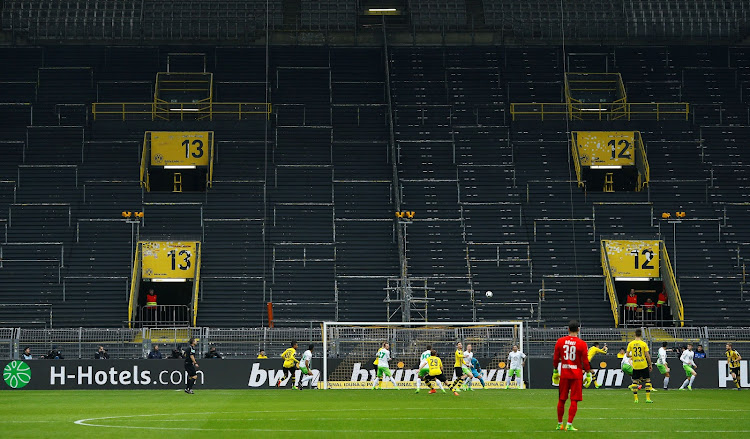 A file photo of Borussia Dortmund hosting VFL Wolfsburg at their Signal Iduna Park stadium in front of empty southern stands due to a one-mach for Dortmund fans. Dortmund will host Schlke with not spectators at their 80,000 seat venue on Saturday. Picture: REUTERS/Thilo Schmuelgen

Berlin — With players’ voices bouncing off the empty stands and the leathery thud of the ball audible across the pitch, Germany’s Bundesliga will have a different feel when it resumes on Saturday.

Having been starved of action for two months due to the Covid-19 shutdown, German football fans must grudgingly and quickly adapt to a new reality, with all matches to be played without spectators to protect against the spread of the coronavirus.

These fanless matches, called “ghost games” in Germany, are virtually unknown in the Bundesliga.

Borussia Moenchengladbach’s encounter with Cologne on March 11 was the only top-flight game yet to have been played without supporters. In other parts of Europe, however, such ghost games are not a rare occurrence, with most due to sanctions for crowd trouble.

Yet German fans must now surrender an ingrained Saturday afternoon routine and watch the league restart from afar, knowing any attempt to get close to the team would be a violation of the league’s health regulations.

A total of about 300 players, officials and staff will be allowed in and around the stadiums during matches. Police will be keeping off limits for fans the areas around the arenas, including at Borussia Dortmund’s Signal Iduna Park ahead of the derby against Ruhr valley rivals Schalke 04.

“Even though we have the desire to motivate the team as much as possible for the derby in front of empty tribunes with us being at the bus arrival for example, we will not gather at the stadium,” Borussia Dortmund fan group Suedtribuene said.

Bundesliga clubs have been thinking of ways to enhance the atmosphere, either by playing music or putting up cardboard cutouts of fans in the seats, as is the case at Borussia Moenchengladbach.

For €19, the club offers to put a “cardboard you” in the stands — and visiting teams’ fans can book cut-outs for the away end. The club said more than 12,000 such effigies have been ordered so far.

However fans say nothing can replace the real thing and more than 20 German supporter groups joined dozens of others across Europe to issue a call on behalf of “United supporters of Europe” to football authorities to stop play until fans are allowed back in.

“Sports clubs should fully understand the passion that holds thousands of people together, and not just listen to the wolves of business ... the public and supporters are the essential factor of ‘popular sport’ by definition,” the group said.

“Therefore, we strongly ask Uefa and the national associations to keep the ban and stop the football competitions until going to the stadiums is once again a habit free of risks for public health,” they said.

Bundesliga to kick off in a week

Bundesliga to kick off in a week