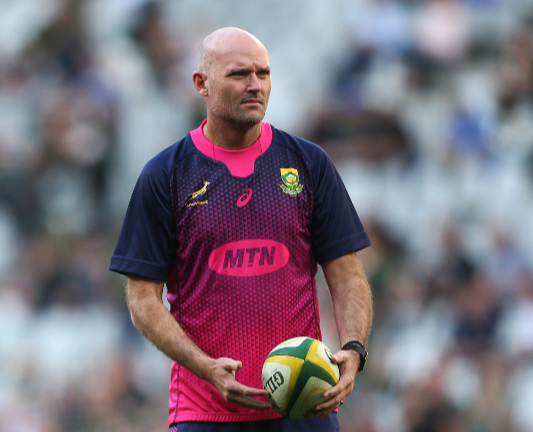 Duane Vermeulen and Cobus Reinach will be in the reckoning for the start of the Rugby Championship against New Zealand in Mbombela and Johannesburg in August if they overcome their injuries.

No 8 Vermeulen, from Irish side Ulster, is recovering from a knee injury and scrumhalf Reinach from Montpellier also missed the 2-1 series win over Wales due to a shoulder injury.

There is further concern for the back-to-back clashes against the All Blacks as winger Cheslin Kolbe was substituted in the 21st minute by Willie le Roux in Saturday’s 30-14 win against Wales at Cape Town Stadium with what appeared to be a serious facial injury.

“We will reassess all the injuries in the next few days and then as a selection group we will sit this week and have a discussion in terms of what the plan is going forward to the Rugby Championship,” Nienaber said in Cape Town.

The win in the third and final Test against Wales gave lock Eben Etzebeth 100 Test matches while hooker Bongi Mbonambi featured in his 50th.

“We will reassess this situation and come up with plans. We didn’t want to touch on these issues of injuries before we played the final Test match against Wales.

“The biggest thing for us over the past three weeks was just to focus on this series against Wales.”

Bok captain Siya Kolisi said their focus now shifts to the Rugby Championship in which they take on the All Blacks, Australia and Argentina at various venues over the next two months.

“We have a camp before the start of the Rugby Championship and we will start focusing on that when we reconvene. Our focus over the past three weeks against Wales has been our set-piece and I think it worked very well on Saturday.

“It made a huge impact and as a team we were able to dominate the scrums and the maul. Once we got that right, everything else flowed in the game and we are able to cover on the front foot with Makazole Mapimpi and Cheslin Kolbe going into the air,” said Kolisi.

The Boks will take on an All Blacks side possibly low on confidence as New Zealand’s 32-22 home defeat to Ireland on Saturday was their fourth in their past five Test matches, piling pressure on coach Ian Foster.

It is the first time the All Blacks have lost consecutive Tests on New Zealand soil in more than two decades and, with the World Cup looming in a year’s time, the team will be under tremendous pressure in SA.